The best teams in the NFL kick off 2010 January football with intense match-ups that read revenge and intensity all over. Last week, Blazers might have snagged a glimpse of how the Jets, Bengals, Eagles and Cowboys will fair on the field this week. But some of our weekend match-up teams deceived us. 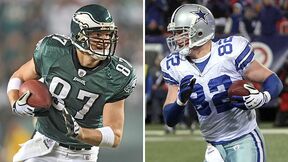 Photo: Will the Cowboys or Eagles take the win?

Photo: Will the Cowboys or Eagles take the win?

The Bengals pulled a surprising laid-back game against the Jets and let them win big in a 37-0 shut-out. This weekend, we'll see if the Bengals can get a win with more on the line and a home field advantage. We'll also find out whether the Cowboys can get a third victory over Philadelphia and whether the Patriots and Cardinals can play without their injured stars. Tune in for some playoff potency this weekend, Blazers. It's playoff time!

Rose says:
If the Jets can pull a shut-out 37-0 victory against the Bengals like they did last week, they'll have no difficulties beating them out again this week. A Bengals strategy to hold back like the Cardinals is one thing, but allowing a themselves to be defeated 37-0 is another. With the best rushing and all-around defense in the league, the Jets will pull another in over Cincinnati this week.
Dennis says:
New York simply destroyed the Bengals in their first match-up just last week, keeping Cincinnati to zero points. But will the tables turn for the Cardiac Cats at home? I'd like to think so. The Bengals had nothing to play for last time, and will definitely step it up this week.
Ava says:
I was surprised that the Jets gave the Bengals such a whopping last Sunday, but never fear. They won't do it again. This time around, Cincinnati has more to play for and home field advantage never hurts.

Rose says:
The Cowboys are probably one of the most feared playoff teams this season, partly due to their dominant defense and physical toughness. With a strong defensive line, Dallas can pull a crushing victory against the Eagles. The Cowboys had four sacks last week, restricted Eagles' QB DeSean Jackson and prevented the team from running more than eight yards. They can do it again without trouble.
Dennis says:
Well looky here, folks! The Cowboys have successfully maneuvered their way out of December Doom. And with a bang, too. After embarrassing the Eagles last week, Dallas will stick to their game plan and give Philadelphia the same treatment this week. Cowboys win big.
Ava says:
Dallas won convincingly last week. Unlike the Jets, they're going to keep the streak alive. It will be interesting to see if Tony Romo can win his first playoff game ever, as he played surprisingly well in December. Romo accumulated an average of 310 yards per game this past month, completely contradicting his reputation of inconsistency. Another noteworthy fact: Donovan McNabb has never lost a first round playoff game. There's a first time for everything, right?

Rose says:
With injuries plaguing both WR Wes Welker and QB Tom Brady for the Patriots, they may not be able to play to their full potential this Sunday. However, Brady has demonstrated an impressive ability to play through injuries and may still bring the offensive strength needed to conquer the Ravens. New England's rushing game and defense have also been decent, while the Ravens have a weak secondary that can't sustain against long plays. The Patriots beat the Ravens.
Dennis says:
New England will be playing without Wes Welker and some key defensive starters against a Baltimore team fueled by a couple weeks of revenge. This sounds like an upset for the Ravens. If the flock can keep Tom Brady in check, look for Baltimore to meet up with the Colts next week.
Ava says:
New England took a big hit last weekend by losing Wes Welker, the number two wide receiver behind Randy Moss. Welker is definitely the team's best possession receiver, but he won't be playing anytime soon with his torn ACL and MCL. The Patriots will be running the ball more and putting much more pressure on Moss. While that makes the match-up a little more interesting, Baltimore is still shaky. I'm going to side with the experience and smarts of Belichick. Plus, Brady has a tendency to bloom in the playoffs.

Rose says:
The Cardinals have a potent defensive line, but they're liable to show their weakness with rushing, which could be detrimental against the Packers. Green Bay ranks number one in the league for rushing, defensive yards and offensive points. They're strong against the run and have been making consistent headway throughout the season. The Packers definitely have the potential to outplay the Cardinals in this Wildcard match-up.
Dennis says:
Arizona is missing one of its key offensive players: Anquan Boldin. Against a defense that has proved ferocious against the run and pass, the Cardinals don't have the odds in their favor. Green Bay's running game has also been on the rise; Ryan Grant had a couple big runs in the last few games. The Cardinals simply don't have the manpower to overcome the Packers this week.
Ava says:
Arizona has had a quiet, but successful season. Green Bay has been up and down, but the Packers can still pull out a win when it counts. Aaron Rodgers & Co. have also found their rhythm lately. Last week, Kurt Warner was only able to muster up 31 yards and made no touchdowns against Green Bay. Packers for the win.