As the same-sex marriage bill passes in Maryland, opposition seems like a way of the past

Election years bring controversial issues to the forefront of national debate; this year, gay marriage is fueling much of the discussion. Heated debates were sparked by the repeal of "Don't ask, don't tell," and certain GOP candidates (most notably Rick Santorum) avidly oppose gay rights. However there seems to be a pattern: as more people oppose gay rights, more people fight back. 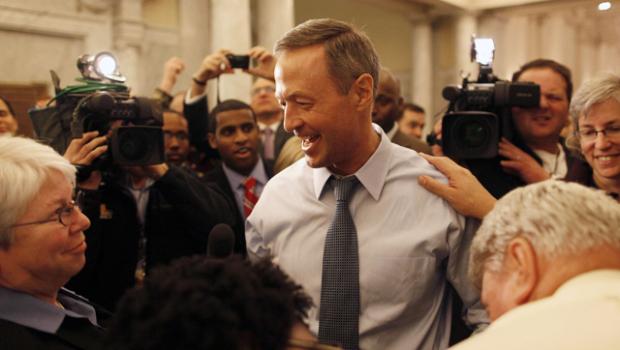 Photo: Governor O'Malley and others celebrated after the bill passed the House.

Photo: Governor O'Malley and others celebrated after the bill passed the House.

On Feb. 17, the Maryland House of Delegates passed a bill legalizing same-sex marriage, followed by the Senate on Feb. 23. Governor Martin O'Malley vowed to sign the bill if it made it past the General Assembly, making Maryland the eighth state in the union to legalize the act.

This is especially a triumph for supporters who watched the bill's rejection this time last year. But as gay marriage is such a disputed topic, there are many, even within the Maryland Congress, who oppose the decision. Some stronger opponents are aiming to get the issue back on the ballot as a referendum for the November election. According to the Washington Post, opponents need to gather 55,736 valid signatures of registered Maryland voters in order to put the issue on the ballot.

After years of Maryland citizens and politicians pushing for the bill, it seems unlikely that it would get voted out so quickly. Trying to repeal a gay marriage bill once it's already been passed is almost as unlikely a proposition as trying to overrule Roe v. Wade. Once this country moves forward, it rarely moves back. Although the legalization of same-sex marriage seems unlikely for many conservative states, like Texas or Oklahoma, the passing of the bill in Maryland was almost inevitable. Maryland's proximity to the liberal District of Columbia, which legalized gay marriage in 2010, no doubt contributed to the decision. If the issue makes it onto the ballot in November, we could probably rely on our mostly blue state to keep it legal.

Even though eight states (plus D.C.) is still a small fraction of our country, many other states are slowly but surely moving toward equal rights. Some states that do not have same-sex marriage have legalized a type of civil union, which may not be the same as a marriage but it's better than nothing at all.

Even in the fairly progressive Silver Spring, opinions on the decision vary. Junior Patrice-Morgan Ongoly is opposed to the idea of same sex marriage because of his religion. "According to my religion, men can't marry men and that's my basis for being against the bill," he said.

While it's understandable that some might be opposed to the concept for religious or other personal reasons, others believe that a marriage between two people shouldn't be based on others' personal preferences. Junior Aaron Meyer doesn't think someone's personal beliefs should get in the way of the law. "I believe anyone should be married no matter what your gender preference," he said. "Your religious belief shouldn't interfere with what happens in the state."

Neither of these are new ideas, but when people try to change a progressive bill that has already been passed, the latter message begs repeating. People had the same takes on interracial marriage, until the last laws banning it were done away with in 1967. As people's views change, the law follows.

Anyone thinking about signing the petition or trying to put repealing gay marriage on the ballot should think twice. Denying someone the right to marry whomever they choose for your own personal reasons says that you deserve the right to be happily married but a complete stranger does not. Everyone is entitled to their own opinion about marriage equality, but denying others of their civil rights is a way of past.