The girls' varsity basketball team (1-2) was unable to prevent a powerful rally by the undefeated Paint Branch Panthers (3-0) on Friday evening. Starting the game with a disadvantage, Blair tried unsuccessfully to manage a patient offense and consistent defense across the court. 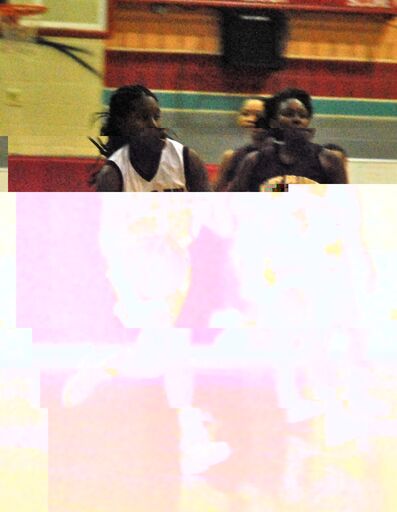 Although the Lady Blazers trailed by nine points at the end of the first quarter with a score of 11-20, they were able to jump to a 30-30 tie with the Panthers by the beginning of the third quarter. Senior guard Inkera Patterson led the comeback throughout the second quarter with a sharp interception on defense, followed by a well-executed layup. Sophomore forward Johanna Lopez quickly followed suit by stealing a Panthers offensive rebound and returning the ball to Blair's possession. With 20 seconds before the end of the second quarter, junior Sarah McMillian finished the Blazers' consistently aggressive quarter with a strong show of defense at the back court. McMillian blocked a shot by Paint Branch's strong number three player, maintaining the score at 24-28 by the third quarter.

The start of the first quarter looked promising, as Patterson once again led the team by making two baskets within a minute. The Lady Blazers gained 19 points over the span of the second quarter, while the Panthers trailed by 10 points. But as the third quarter progressed, the Panthers mounted a strong surge and took the scoreboard to 38-48. Four minutes into the game, the Panthers' offense grew particularly aggressive. From that point on, Paint Branch gained a 10-point lead through foul shots and impressive three-point shots.

Coach Erin Conley believes Paint Branch was able to get ahead because of Blair's ball mishandling and lack of offensive and defensive commitment. "I think we turned over the ball and we didn't execute on offense or defense," Conley said.

During the fourth quarter, Blair attempted to make an offensive comeback against Paint Branch's tough player-to-player defense. The Panthers received four foul shots within 30 seconds due to Blazer aggression, which were not well-received by the audience. A minute into the period, Patterson swiftly maneuvered around the strong defense while Lopez and sophomore Myla Sapp covered for Patterson, assisting her layup.

The final three minutes of the game centered on junior Janet Henkai and McMillian. The duo worked together, with McMillian assisting to make three baskets in a row. McMilliam repeatedly caught Paint Branch rebounds and smoothly chest-passed to Henkai, who delivered the baskets. "There were spurts of times when defensive plays turned into offensive scores for us," Conley said. Despite these accomplishments, their success couldn't account for the Blazers' lack of points. "It wasn't enough to fix the gap from third quarter," Conley admitted.

Despite the loss, Conley believes the girls accomplished many goals during the game. "We wanted to limit turnovers and stop Paint Branch's number three," she said. "I think we limited her to the least amount of scoring of the entire season." Overall, Conley is satisfied with the performance. "I think we played hard. We just have a lot to improve on," she said.

The girls' varsity basketball team plays their next home game on Dec. 15 against Richard Montgomery High School at 7:00 p.m.