At least 129 victims died from a combination of deadly terror attacks in the Paris area this past Friday night. The attacks were centered on highly popular and densely populated areas – a theater, the Stade de France soccer stadium, a restaurant in the 10th District and an area in the 11th district.

Early Saturday morning, police freed hostages from Bataclan concert hall, where American band Eagles of Death Metal were among the performing acts. The siege ended in the death of over 100 innocent civilians and two attackers, who had previously opened-fire on the concertgoers. Many of the surviving hostages were wounded and are in need of critical help and assistance. 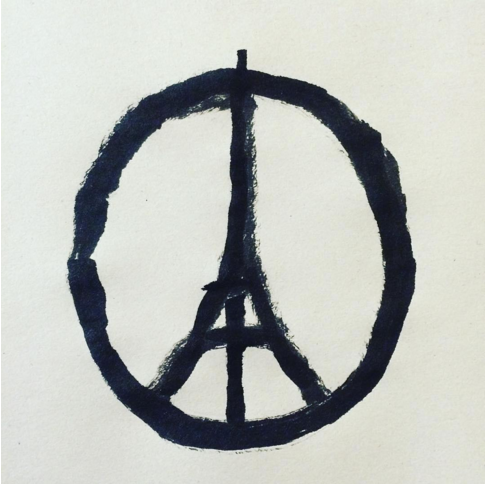 Photo: In the wake of the Paris attacks, the Eiffel Tower has become a symbol of peace.

Photo: In the wake of the Paris attacks, the Eiffel Tower has become a symbol of peace.

A resounding explosion, which is now suspected to have been a suicide bombing, took place near the Stade de France stadium where a France vs. Germany match was occurring. French president Francois Hollande was attending the game and was evacuated at half time.

Le Petit Cambodge restaurant and Le Carillon in the 10th district were also targeted, with attackers opening fire and leaving 10 individuals either dead or seriously injured. La Belle Equipe café in the 11th district was similarly bombarded by gunfire. A death toll or injury count at that location is currently unavailable.

Deputy Mayor of Paris Patrick Klugman stated that he believes that the death toll will continue to rise. Klugman stated of the situation, "We are facing an unknown and historic situation in Paris."

Hollande, in an address to his country, declared a state of emergency and closed all of France's borders. He advised that anyone currently on the streets of the city should seek shelter immediately. According to CNN, Parisians were "inviting people off the streets into their apartments."

On Wednesday, Nov. 17, police were looking for six of the suspected assailants including the suspected architect of these coordinated attacks and Islamic State militant, Abdelhamid Abaaoud.

French police raided an apartment in Saint–Denis, a suburb of Paris, early this morning, Nov. 18, in search of Abaaoud. The raid resulted in at least two casualties, including a woman who detonated an explosive vest. According to two European officials, Abaaoud was killed, though it is still not clear how. Eight others who were involved with the attacks were arrested.

Today's raid was the most recent but among many; French Interior Minister Bernard Cazeneuve stated that as of Wednesday, the police had conducted 414 raids across the country and detained sixty odd people. A long list of weapons was also seized and secured.

On the side of international affairs, Hollande is planning to meet with President Obama and Russian President Putin to discuss decisive measures to be taken against ISIS. Hollande linked the power of ISIS to its "financial and oil resources," which have come together to create "young radical Islamists through complicity in Europe." The meeting is said to take place here.