An inside look at Blair's budding communities with STEM interests

Blazers are always bursting with ideas—so many that it can be hard to keep track. This school year, a number of new clubs have popped up as fresh outlets for students to express their interests. Read Part 2 on new service-based clubs  at Blair and Part 3 on new hobbyist clubs this year. 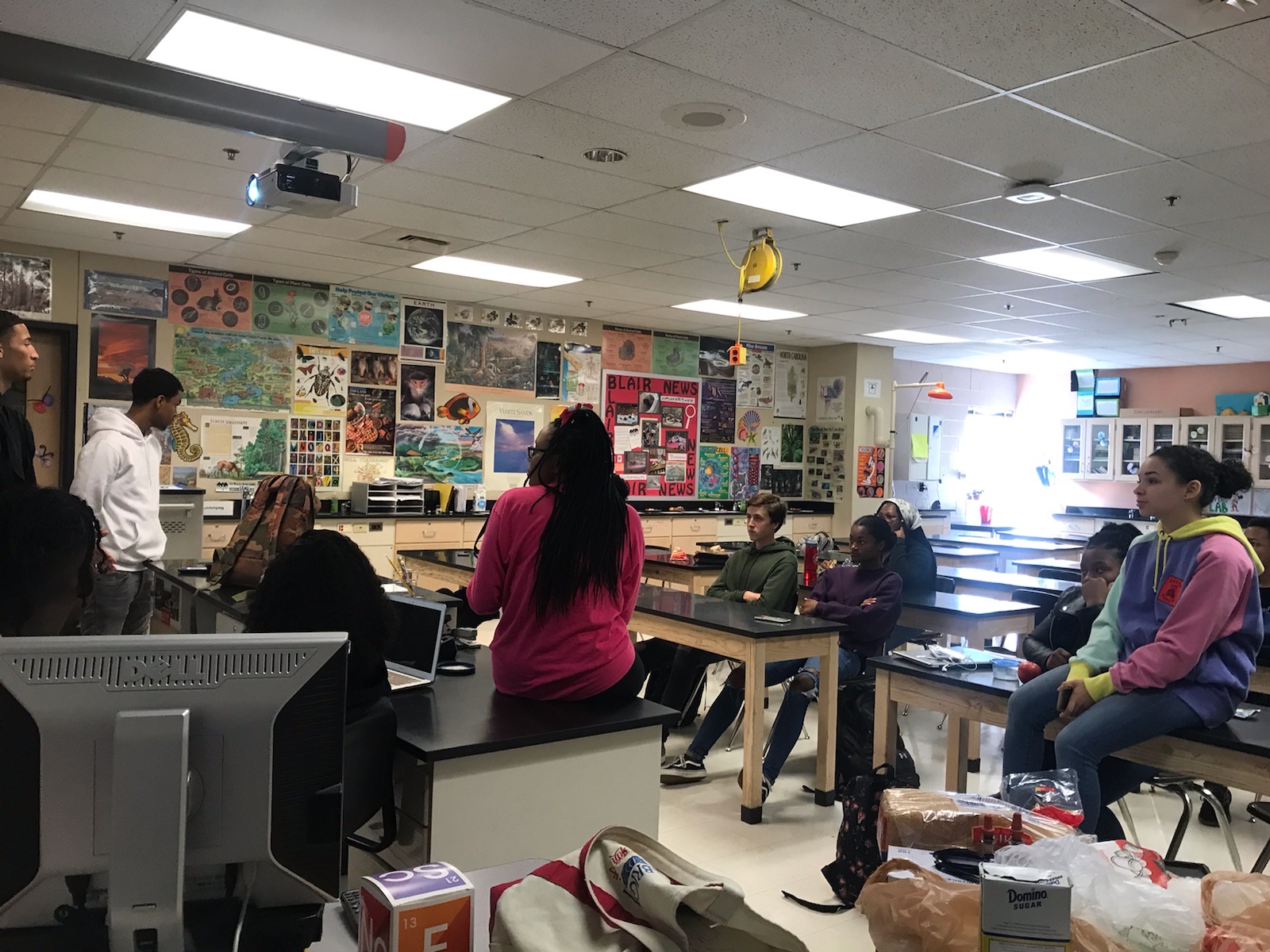 Junior and Astronomy Club co-president Elia Safir opens her arms with excitement while describing the phenomenon of dark matter. Every week, Astronomy Club hosts lectures about intriguing topics, ranging from the formation of stars to the mechanics and engineering of space exploration.

As the year progresses, Safir hopes to invite professional guest speakers. She's also preparing the club for field trips such as visiting the NASA's Goddard Space Flight Center and star-gazing, and competitions such as the USA Astronomy and Astrophysics Olympiad (USAAAO). Although these extra opportunities are available, Safir believes Astronomy Club is suitable for a variety of commitment levels. "Participating isn't mandatory but we will help train and prepare anyone who would like to compete," she says.

Safir emphasizes the inclusivity of the club as a core value of Astronomy Club and welcomes anyone to come learn, regardless of experience. She acknowledges that many science clubs seem exclusive to magnet students, and wants to avoid that sentiment. "You don't have to be in the magnet, and you don't have to be in the STEM academy," Safir says. "[We just want to] cultivate a community of people who love astronomy."

Astronomy Club meets every Monday during lunch in room 213. Their next meeting is on Oct. 14. Contact Elia Safir or Ivy Liang with further questions.

Math-based models may sound complicated, but senior and club founder Marie Brodsky explains them simply. "Math-based models are essentially quantitative approaches towards making predictions about the future behavior of systems, whether they are social systems, physical systems, economic systems and so on," she says.

Math Modeling Club's main purpose is to prepare students for the two-week online ComAp High School Mathematical Contest in Modeling (HiMCM) in November. According to Brodsky, the top two teams from Blair will have the opportunity to participate in a faster paced math modeling challenge in February that spans 14 hours. Team members work together to submit a final paper detailing their solution.

At each meeting, Brodsky hosts math modeling training sessions, where she introduces students to various techniques used for approaching real world problems using math-based models and opens the strategies up to discussion and debate. "The problems cover all kinds of topics, from designing a roller coaster ranking system to predicting how climate-related events may change the number of visitors at national parks," she says.

Math Modeling Club meets every other Tuesday during lunch in room 313. Their next meeting is on Oct. 15. Contact Marie Brodsky with further questions.

Quantum Computing Club captain and junior Ayush Varshney unveils his new club as beginner-friendly and lecture-based. "We start with the basics of quantum computing, and as we progress over time, we will delve into revolutionary algorithms that may end up changing the world as we know it," he says. The lectures range from the theoretical side of quantum computing to its more practical and applied side.

Aside from lectures, the club also has engaging in-school activities planned for its members. "Since these algorithms only work on quantum systems, we can't really build and test them on normal computers," Varshney says. "We make and run quantum circuits through IBM's online quantum computer simulator instead."

Quantum Computing Club meets every other Monday during lunch in room 314. Their next meeting is on Oct. 21. Join the club's mailing list here. Contact Ayush Varshney, Daniel Ge, or Kaan Kayaalp with further questions.

Chapter founder Liam Olagbaju (senior) preempts a common misunderstanding: despite its name, National Society of Black Engineers (NSBE, pronounced "nes-bee") is for anyone interested in engineering—not just black students. The focus of the club lies in ongoing engineering projects, competitions and gaining knowledge about the field.

Olagbaju initially got the idea for a Blair NSBE chapter from coworkers during a four-week summer engineering program at the University of Maryland (UMD). "They said it's like a big family, and they all watch each other's backs," he says. "There was no NSBE chapter at Blair— the largest high school in the county— so I said, 'I guess I'll have to start it.'"

Through NSBE, Olagbaju wants to introduce Blair students to various basic engineering fields such as chemical and aerospace engineering. At each meeting, he plans to discuss a new field and related projects, colleges and scholarships. "A lot of people don't really know what they want to do in high school," Olagbaju says. "I want to be able to give them a chance to experience these opportunities."

NSBE provides a large pool of opportunities for its members, including internships. "We'll have people from NSBE come to talk, and we'll have other engineers come as well," he says. He's already arranged for a visit from a NSBE member who works at NASA's Goddard Space Flight Center, Sheri Thorn.

Olagbaju accredits Thorn with assisting him in getting Blair's NSBE chapter on its feet. She's also helping him plan a visit to NASA as well. "She said she can definitely get us into NASA to go on a field trip there, which is actually really hard because the waitlist usually takes a year," he says.

MBHS NSBE meets every Thursday during lunch in room 362. Their next meeting is on Oct. 10. Contact Liam Olagbaju with further questions.