Part Two: What Happens Next?

After numerous allegations of sexual misconduct, a middle school teacher remains in the classroom

Links to the other installments in this series can be found here: Part 1, Part 3

Blair freshman Diana's eighth grade P.E. and health classes became a nightmare when she was continuously sexually harassed by her teacher. "Whenever I would ask a question in class he would just be rubbing my back, he would call me 'sweet thing' and 'baby' and it was just really weird," she explains.

Several Blair students who went to the same middle school recall similar uncomfortable experiences from over three years ago with this teacher, but many felt like they couldn't say anything about it. "I remember hearing from my friends like, 'he's really, really weird, don't get too close to him, keep your distance,'" remembers junior Sarah. "There was a lot of rubbing on the back, stuff like that, stuff teachers don't do because they can get in trouble for it." "I always had like that feeling that he was a little suspicious because he would always stare at people," says junior Anita.

Among some Blazers, the teacher was known for targeting his inappropriate comments at specific students during class. "There was this one girl in my class that he'd single out and he'd talk to her one on one. She didn't look that comfortable but he kept pursuing class after class everyday and I remember it being really weird because she was like 12," explains Sarah.

Anita recalls an instance where the teacher singled out a student and made comments about the clothes she was wearing. "This one day my friend was wearing leggings and he was like, 'oh you look good in those leggings.' At first I thought it was a little weird and my friend didn't really care about it, so she let it go. A few days after she was wearing these other leggings and he said, 'wow you look really tall in those leggings, you look nice.'"

For Sarah, reporting these events didn't even cross her mind as a middle school student. "I don't remember anybody saying like, 'maybe I should go to a teacher.'" Looking back, she reflects that a solution didn't seem likely even if incidents were reported. "I don't think that there was enough of a support system there that if you went to a teacher people would actually do something about it."

Unlike the Blazers who had previously graduated from this middle school, Diana did decide to report the P.E. teacher, as she had been taught to do from a young age. "My mother always told me if something's wrong, if something doesn't feel right, don't just keep it to yourself because that's when trouble starts," she says.

So she went straight to the adults, first to the principal, a woman she trusted, and then to her counselor, to lodge a complaint. To her surprise, she found that she wasn't the first one. "I went to the principal and I told her that my health teacher was calling me weird names and touching me inappropriately and she said, 'We'll take care of it, we've gotten other reports before and this is his last strike'," she explains.

She learned that the two other complaints, both from young women had been lodged earlier that year: one a couple months before Diana's and one about a year before.

What happened next for Diana was exactly what should occur every time a complaint like this is lodged. "For a week [the teacher] was under fire, so they wouldn't let him teach for a week, we had a sub for like a week, and then he got replaced with another teacher and I found out [the accused teacher] got fired," she recalls, "I just told [the principal] and they just took care of it and they just followed up and told me what happened." 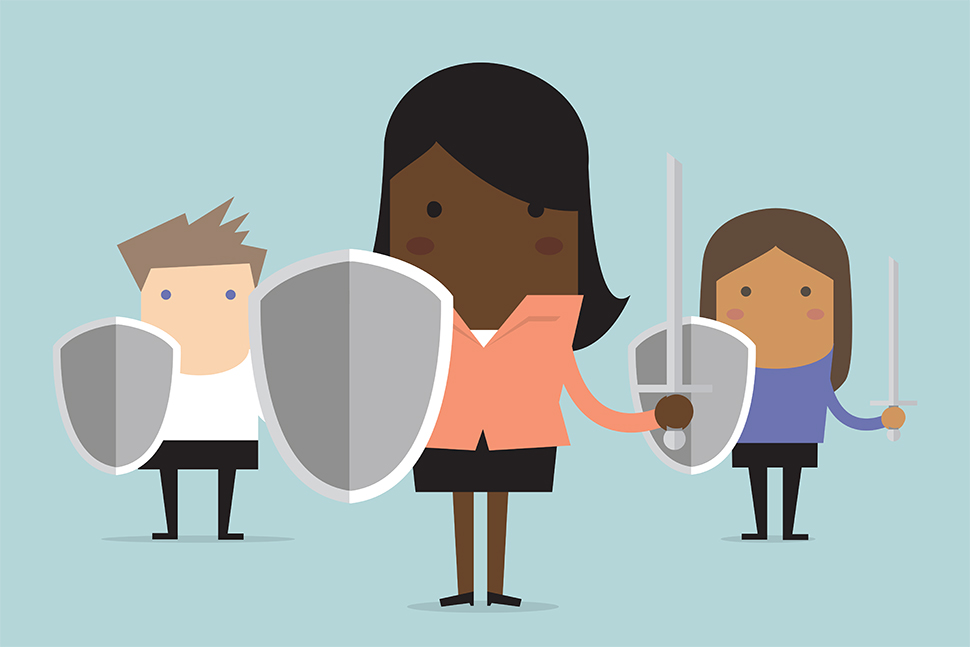 Photo: When she was little, Diana learned from her mother to speak up when something was not right.

Photo: When she was little, Diana learned from her mother to speak up when something was not right.

According to the Montgomery County Public Schools Investigation Specialist Kathleen Greene, when a serious allegation has been filed, the teacher will be removed from the classroom during the investigation. "For safety reasons during our investigation we would remove that staff member on paid leave. Because it's an allegation, we don't want to take away their pay because it might not be true, so we will remove them from school. We have to give the staff member due process, and we have to do our thorough investigation," explains Greene.
Yet the situation was not actually resolved. Oddly enough, the school directory for the 2017-2018 school year still contained the teacher's name, and a call to the school quickly confirmed the worst: that the alleged offender is, in fact, still teaching classes. Even more confusing is that not one of several teachers at the middle school even remembers the teacher going on a leave of absence.

According to Greene, in allegations of sexual harassment, the MCPS Department of Compliance and Investigations will alert Child Protective Services (CPS) and the county police's Special Victims Unit department before conducting an investigation in accordance with the Memorandum of Understanding. "We step out and wait until the other agencies are done. We won't do anything except get the staff member out of the school. We want to make sure that the integrity of the investigation is good and that we don't interfere with the police department," she explains.

When sexual misconduct allegations are sustained by the police, typically MCPS will recommend that staff member for termination, and will work to take away their teaching license to prevent them from going to another county to teach. Regardless of the verdict found by the police, Greene's department will conduct their own investigation once the police are finished.

"Once we get the green light that the police and CPS are done, then we get all their documents and we do a personnel investigation. We'll meet with them and we'll go over all the evidence that we collect. We can now interview students who maybe have reported the incident, staff members who may have witnessed it. We use the security cameras," explained Greene.

If violations to the code of conduct are found, the information gathered from Greene's office is sent to the MCPS Chief Operating Officer, Andrew Zuckerman. "He'll review it with the legal staff, and they'll decide what type of discipline is warranted. It could be anything from a letter of reprimand, it can be suspension of pay, it could be recommendation for dismissal. It's all up to Dr. Zuckerman and the legal department," explains Greene.

In the case of Diana, she does not recall being interviewed by any county officials. In any investigation that may have been completed concerning Diana's teacher, it is likely allegations were not sustained, as the teacher returned to school in the 2017-2018 school year after being on leave through the end of the 2016-2017 school year. However, as the school's administration has declined several requests to comment, it is unclear if parts of the allegation were sustained, violations were found, and if any discipline was warranted to the staff member.

Diana is among countless students who have spoken up, and despite having credible allegations, investigating authorities had trouble finding proof without others coming forward. MCPS needs to take a more active role in investigations, seeking out other students and possible witnesses in order to prevent incidents like this from happening again. MCPS must create an environment where students feel like their voices will be heard when they report harassment. Therefore, it is of the utmost importance that schools ensure that all allegations are thoroughly investigated.