Both the boys' and girls' Blair cross country teams fell to the Wootton Patriots in a dual divisional meet at the Blazers' home course. Juniors Theresa Regan, Jenny Sholar and freshman Jinhie Skarda finished fourth, fifth and sixth respectively, claiming the top spots for the Blair girls. Wootton swept the top seven spots in the boys' race, clinching a decisive victory for the Patriots.

The boy Blazers were at a disadvantage due to the absence of three top runners: juniors Jeremy Ardanuy, Gabriel Pollak and Connor Dowd. Despite this, co-coach James Demma felt the boys performed strongly. He believed the Blazers lost primarily because of Wootton's high county rank, not because of Blair's lack of runners. "The boys who ran from Blair ran a great race, but Wootton is a far superior team," he said. 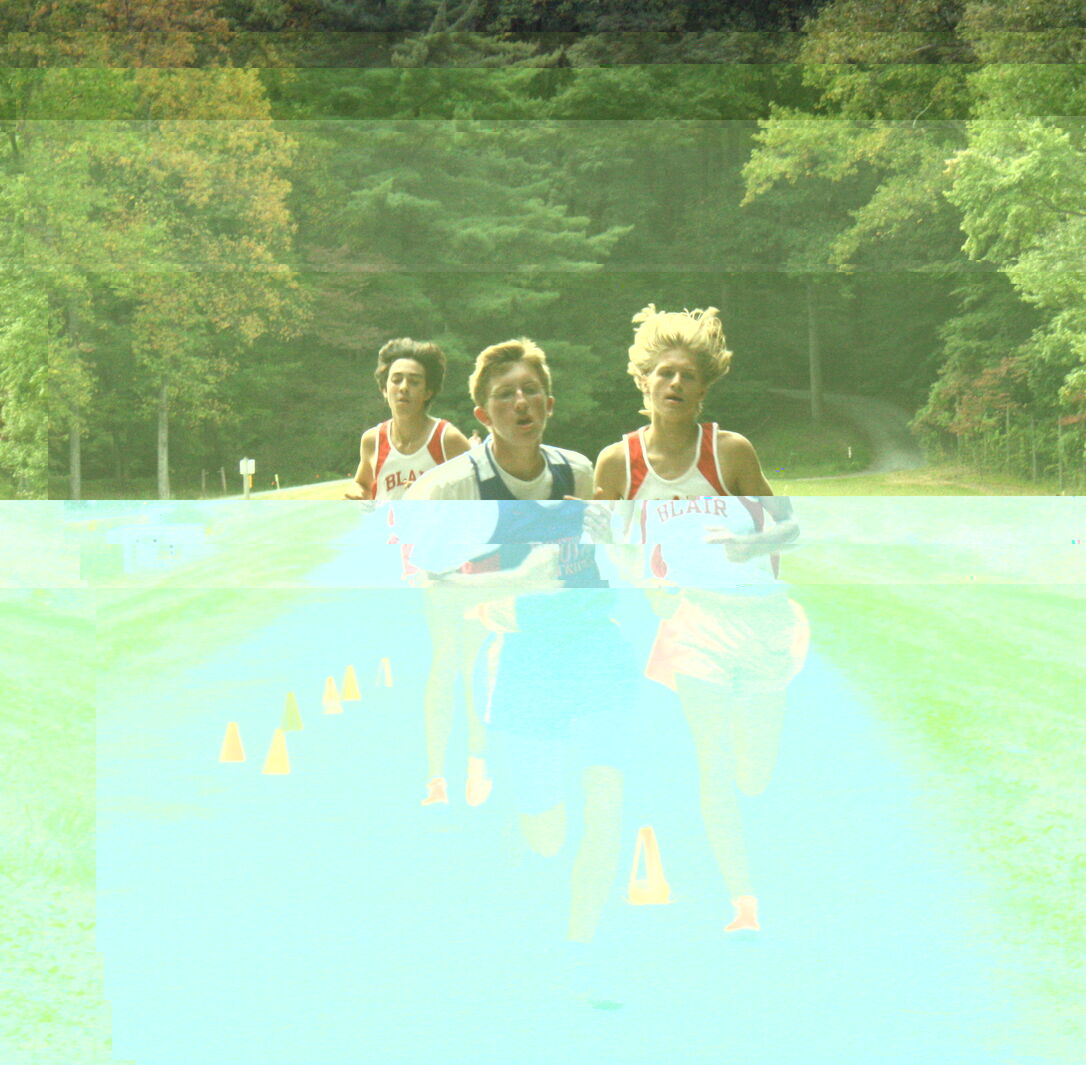 Photo: Blazer sophomores Greg Kehne and Connor Donahue race on the heels of a lead Wootton runner in their dual meet against the Patriots.

Photo: Blazer sophomores Greg Kehne and Connor Donahue race on the heels of a lead Wootton runner in their dual meet against the Patriots.

Wootton runners Kenny Wohl, Will Severynse and Christian Haudenschild finished in the top three, coming through the finish chute shoulder-to-shoulder with times of 19:19, 19:18 and 19:18. Blazer sophomore Gregory Kehne finished first for the Blair team, in ninth place, with a time of 20:10. Though he did not rank in the top seven, Kehne remained determined throughout the race. "About halfway through the coach gave me a projected time, and I just tried to keep up with that," he said.

In the girls' race, Wooton's Jessie Rubin, a top runner in the county, finished far ahead of the other runners. Regan, who came in fourth overall with a time of 22:29, accredited her success to her ability to remain calm. "It was one of those days where I felt really composed before the race, and most of racing is mental," she said. Sholar finished after Regan with a time of 22:43. Though Sholar was also confident about her race, she thought running closer to others could have improved her time. "I think staying with a pack would get me more competitive," she said.

Despite the loss, Sholar thought the girls' team showed improvement compared to previous races this season. "A lot of our girls have not been able to hit their times from last year, but they did today," she said. Co-coach Prange agreed, and stated that many Blair runners created personal records for their home course.

Demma believes the team can further improve by closing the gaps between runners who continually place right after one another. For example, many Wootton runners were able to finish between Skarda and sophomore Myla Sapp because of their large time difference. "Getting them to run together would increase our chance of winning," Demma said.

Overall, Prange thought the team ran well against the formidable Patriots. "Wootton's one of the top teams and we gave them a fairly competitive race, all things considered," he said.

Despite both teams' noteworthy performances, an unwelcome disturbance marred the race. One Wootton girl runner collapsed on the trail, and Demma biked out on the trail to retrieve her. According to Demma, the situation was not serious, but preparedness is essential. "It's scary to have kids out in the woods, so far from help," he said.

Cross Country's next meet is Tuesday, Oct. 6 against Richard Montgomery and B-CC at 3:30 p.m.