Offensive rally not in time as football loses seventh straight

Blair varsity football dropped their seventh game in a row after a tight loss on Friday at home to Wootton, 19-6. The Blazers stayed close, going into the fourth quarter down only 6-0, but a much-needed offensive spark came too late as the Patriots commanded the last 12 minutes of the game.

Despite the loss, Blair head coach Jeffery Seals was still supportive of the team. "The score doesn't say how much we fought," Seals said. "And we fought."

Blair (0-7) was able to fend off the quick, no-huddle offense of Wootton (4-3) in the first quarter, forcing punt after punt. But the Blazer offense was also denied a rhythm, struggling to get first downs. With 5:30 left in the half, the rain finally got to the Blazers when a fumble returned the ball to the Patriots. With possession and momentum, Wootton's sophomore quarterback launched the ball down field for a big gain deep in Blair territory. Two plays later, the Patriots capitalized on the drive by running a quarterback sneak into the end zone with 1:46 left. A failed extra point left the lead at 6-0, Wootton. 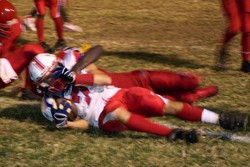 Photo: A Wootton player gets tackled by the Blazers defense.

Photo: A Wootton player gets tackled by the Blazers defense.

The second half brought more rain and slightly better offensive production for the Blazers. Blair was able to get the rushing game going thanks to juniors Jonathan Haughton and Keith Ayensu, but the team was plagued with penalties that reversed all progress. At its worst, a Blazer drive that started to threaten inside field-goal range ended up on the Blazers own one-yard line after personal foul penalties.

Likewise, Blair's defense also gave up critical penalties on crucial downs for the Patriots. Wootton was able to continue drives in this fashion, and wear out the Blazer defense, as the tired unit began having trouble making tackles. A long Wootton drive ended with a short run for a touchdown, increasing the deficit to 12-0. The Patriots' two-point conversion failed, however, keeping Blair within striking distance.

But with the game winding down, Blair's offense floundered once again. Wootton was able to profit from excellent field position by taking over on the 40 yard line. In a series of long passes, Wootton moved up to Blair's 23 yard line. The Patriot running back then drove into the end zone with 3:08 left in the game for a 19 point lead.

Photo: A Blazer gets treated for his injury as his teammates focus on the game.

Photo: A Blazer gets treated for his injury as his teammates focus on the game.

With under three minutes and the ball back in their hands, the Blazers finally got going on offense. Egber hit a long pass to a wide open Enuma Nzesi, who avoided tacklers on the 60-yard pass play. Three plays later, Haughton ran it in for a touchdown with two minutes left, for a final score of 19-6.

Blair's rally had come far too late for relevance. "We gotta show up and make our presence known instead of waiting until the end," said junior and free safety Tony Wells.

Blair's next game is against Kennedy on October 26 – Blair's homecoming. Game plan? "Just try and get a win," said Seal, an accomplishment that has been elusive thus far.