Pleasant but shaky waters of "The Life Aquatic"

Wes Anderson's latest film isn't perfect, but worth taking a swim in

Sure, it's not the most emotionally profound work of Anderson's. But don't fret, "Aquatic" is anything but a disappointment. It's a comedic riot. 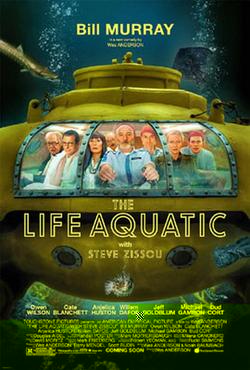 Photo:
Bill Murray stars as Steve Zissou, an oceanographer who is setting out with his crew, Team Zissou, on their ship, the Belafonte, to seek vengeance on the "jaguar shark" that slaughtered his closest friend Esteban (Seymour Cassel).

Steve's mission for revenge is set back by a handful of significant nuisances. As he leaves for his trip at sea, Steve finds his marriage with his wife Eleanor (Anjelica Huston) in the pits, he meets his son Ned (Owen Wilson, a regular actor and writer collaborator of Anderson films) for the first time in his life and he has to put up with Jane (Cate Blanchett), a journalist who is constantly prying into his personal life to complete her profile on Team Zissou.

Though life at sea may be a pain for Steve, it's hilarious for us, particularly thanks to phenomenal acting. Murray's delivery and presence is especially vivid and comedic, whether he's fighting pirates, disastrously flirting with random girls or breathing air into the film's uproarious spur-of-the-moment dialogue.

Steve's also entertaining in the way he carries himself in conflict. In one particularly memorable scene, Steve finds out that Ned is in a romantic relationship with Jane, who Steve himself was clumsily chasing. After a bit of comical, macho-man rivalry chitchat, Ned walks up to Steve, trying to look intimidating. Instead, he seems to be impersonating a penguin, with his chest puffed out and his head up high. In his boyish tough-guy voice, he says, "I'm going to fight you, Steve." Ned isn't quite expecting what comes next. Steve simply rolls his eyes, punches Ned square in the face and says with a holier-than-thou tone, "You never say, 'I'm gonna fight you, Steve.' You just smile, act natural and then, you sucker, punch."

Other characters, though less developed than Steve, are just as amusing. Willem Dafoe's tongue-in-cheek performance as an over-sensitive Team Zissou tag-along, Klaus, is outrageously funny. There's also Jeff Goldblum's small role as Steve's rival, Alistar, which is delightful on its own but hysterical with Steve.

The high comedic level isn't all "Aquatic" has going for it; the film's cinematic style is stunning. Montages are used effectively in moderation to narrate background information, most notably a scene in which Steve describes the Belafonte using a "living-dollhouse" interpretation of the ship. The film not only uses inspiration of Anderson's past works, but it also takes brave new stylistic approaches.

Animated sea creatures found in many of the underwater scenes are amongst some of the best visual aspects in "Aquatic." Director of animation Henry Selick ("The Nightmare Before Christmas") creates delightfully inventive creatures such as "sugar crabs" and "crayon ponyfish." The creations are vibrant with color, have remarkable designs that mesh together various organisms to create incredibly peculiar looking concoctions and add a subtle tone of fantasy to "Aquatic." Furthermore, the "jaguar shark," who makes its appearance in the film's gripping climax, is the ultimate high in the remarkable visual advancement peaks of "Aquatic."

Music is another perk present in "Aquatic." The movie isn't going to revive any careers of retro artists as "The Royal Tenenbaums" did for Velvet Underground's Nico, but it does put an interesting spin on another rock legend, David Bowie. Seu Jorge, who also has an acting part as a member of Team Zissou, appears between and occasionally during scenes, singing Bowie songs such as "Ziggy Stardust" and "Five Years" in Portuguese as he strums his guitar in a soothing manner that gives a refreshing break from some of film's antics. "Aquatic" also includes enjoyable compositions from Mark Mothersbaugh, lead singer of Devo and a regular composer for Anderson films.

The absence of Wilson as co-screenwriter ultimately prevents "Aquatic" from being just perfect. Instead, obscure filmmaker Noah Baumbach co-wrote the screenplay with Anderson, but he doesn't quite fill Wilson's place. The new duo isn't fully together with their vision for emotive backdrop of "Aquatic," making a majority of the more serious scenes feel forced and awkward. However, the comedic quality and adventurous spirit of the overall screenplay makes up for this shortcoming.

"Aquatic" may not blow Anderson's past accomplishments out of the water, but it's not to be overlooked. The film proves that Anderson doesn't need to stick to every meticulous detail of his filmmaking trademarks to make a crazy, fun and impressive comedy.

"The Life Aquatic With Steve Zissou" (118 minutes) is rated R for language, some drug use, violence and partial nudity and is now playing in NY and LA. It opens nationwide Dec. 25.