Mice create homes within the rooms of Blair

A new school supply is becoming essential in many classrooms and offices at Blair. It often sits on the floor under desks and near crevices, but some are found higher up in cabinets or by sinks. They come mainly in the form of a wooden rectangle, with a spring loaded wire and a tasty treat placed just in the right position. In some cases, they're activated and the treat is gone, replaced by a once-hungry critter who was hoping to get a bite to eat.

However, you rarely see the mice; what is more likely to be seen are only clues that point to their existence: fecal droppings and shredded wrappers of anything that might seem like food. Their footprints are scattered in places we can't detect, leaving unseen germs everywhere they go. 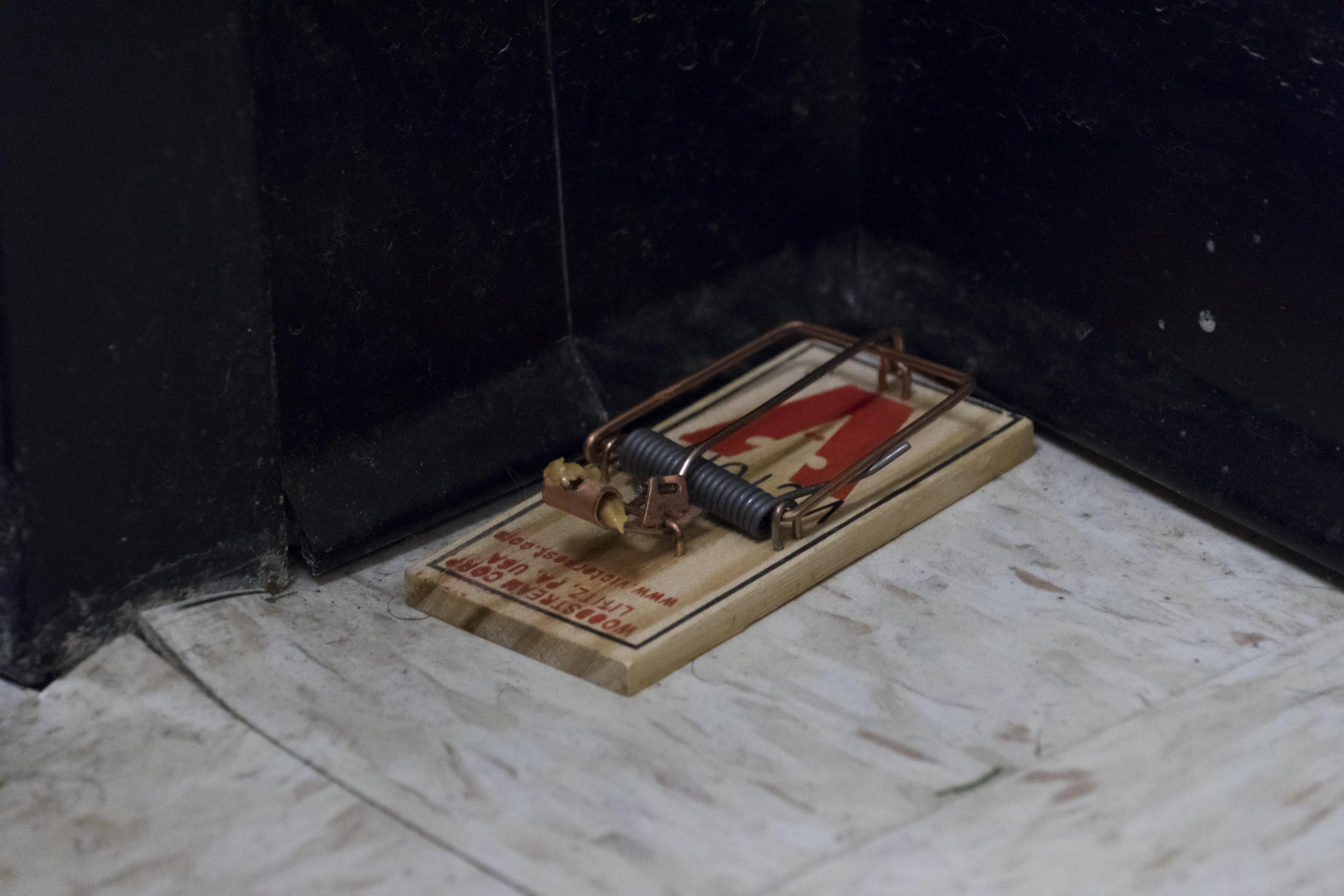 Photo: Mouse traps are placed around the edges of the media center, and where mice have been spotted.

Photo: Mouse traps are placed around the edges of the media center, and where mice have been spotted.

Why They're Here
Montgomery Blair High School is home to several families of mice, and has been for several years. Blair's building has reached an age where mice and other animals have identified it as a food source. "Now the animals who live in our ecosystem know where food systems are. We're a well known food source," Media Specialist Andrea Lamphier explains.

The rise in mouse activity usually begins in late fall when the temperatures drop. This year the activity began as early as the summer. Science teacher Deanna Earle was aware of some mice in the science store room behind Room 344 last school year. Upon returning to school in August, she found out the mice had gotten into just about anything that resembled food in many of the science store rooms. For mice, much of the organic matter used in biology classes such as dried beans or rice are seen as dinner. "When we got back for pre-service in August, we were told that things were thrown out in the store room," Earle explains.

Ever since school has started up again, the mice tend to be seen less throughout the regular school day. "The numbers are down, they figure out our schedules and they don't come out while people are around. They are out and about while the sun is down," Earle explains. Oftentimes, they come out when they think no one is around. Unfortunately for Earle, she used to come into work early and stay late in order to get more work done. "I was stuck in the science office by myself when a family of mice went from the filing cabinet to under the refrigerator," she recalls. Frantic, she thought to call building services, but couldn't reach the phone. Earle's fear of mice has caused her to change her schedule. "I now come at seven, get work done at home and I sit in a little bit of traffic...it's worth it. I won't be the last person to leave the office," she emphasizes.

In over ten years at Blair, Lamphier has seen mice in the media center at all times of the day. Traps line the office and kitchen space, and Lamphier continues to see evidence of mice in the area regularly. "We've already had the exterminator out four times this year," she admits. Similar to in the science offices and classrooms, Lamphier notices a rise in activity during breaks. "It tends to be worse after breaks; the mice have had the place to themselves," Lamphier explains. She remembers one time leaving a chocolate candy in her purse in the drawer of her desk over spring break. "When I went to eat it, it had been gnawed through the wrapper and a good third of it had been eaten. A tissue in my purse was wet,” she recalls.

The Problems They Cause
Both Lamphier and Earle fear live mice, but recognize other greater concerns of a mice infestation in the building than their fears. Lamphier's concerns center more around sanitation. It is unsettling to work among so many mouse traps, knowing that where there are traps, mice have likely travelled. "If they are running over keyboards, a lot of kids will unknowingly be using the keyboard with mouse poop and urine on it on it. It's too revolting to think about," she says in disgust. "Students deserve a mouse free place," she adds.

Earle points out the distraction mice cause in class. "How do you get a class to go back and take their test seriously and focus when you have a family [of mice] travel across the floor?" she asks. 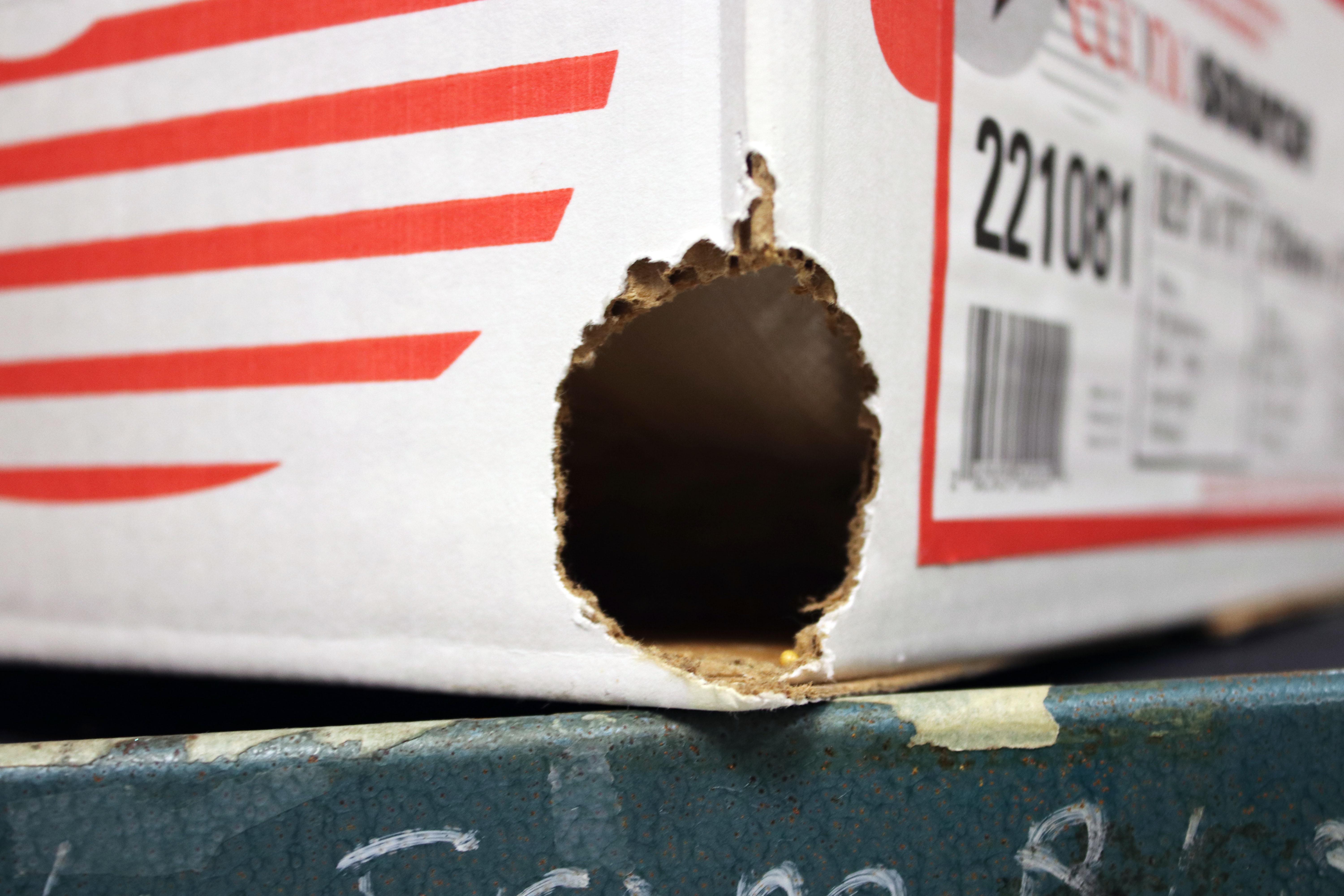 Photo: Mice enter boxes even when they are sealed closed by nibbling their way through the cardboard.

Photo: Mice enter boxes even when they are sealed closed by nibbling their way through the cardboard.

For mice, Blair is a safe haven providing food and shelter. "It's a good location at Four Corners.
You can provide for your young, we have a lot of cabinets for laboratory materials, we have edible things," Earle lists. Lamphier also mentions the proximity of the building to the open field, and remarks that many schools are built in open areas. "Nearly every school is located near open space. Mice have water from the stream and they have the fields," she explains.

MCPS Environmental Health Specialist John Conaway speculates that structural damage can cause an increase in mouse activity, because it provides more places for a mouse to enter a building. Mice can squeeze themselves into the smallest of openings, so doors and pipes must be inspected regularly in order to prevent the entrance of unwanted critters. "Sometimes we recommend some structural repairs need to be done, maybe some hole near a pipe in the wall, or replace door sweeps. We communicate all that stuff to the staff," Conaway explains.

After looking through the records, Conaway did not find anything strikingly disastrous about mice at Blair. "I wouldn't consider the stuff going on at Blair a big issue, it's common to have [mice], we're trying to deal with the root cause," says Conaway.

What's Being Done
When mice persist, Integrated Pest Management sends a licensed exterminator to the school to begin treatment. The treatment includes not only setting up traps, but also educating teachers and staff on how to manage mice. The county is also licensed to use a series of pesticides , or baits, that act as poison for mice, however this is often avoided because it can be harmful to people. "We're limiting exposure to people because pesticides can be dangerous, we treat that as a last resort," Conaway explains. 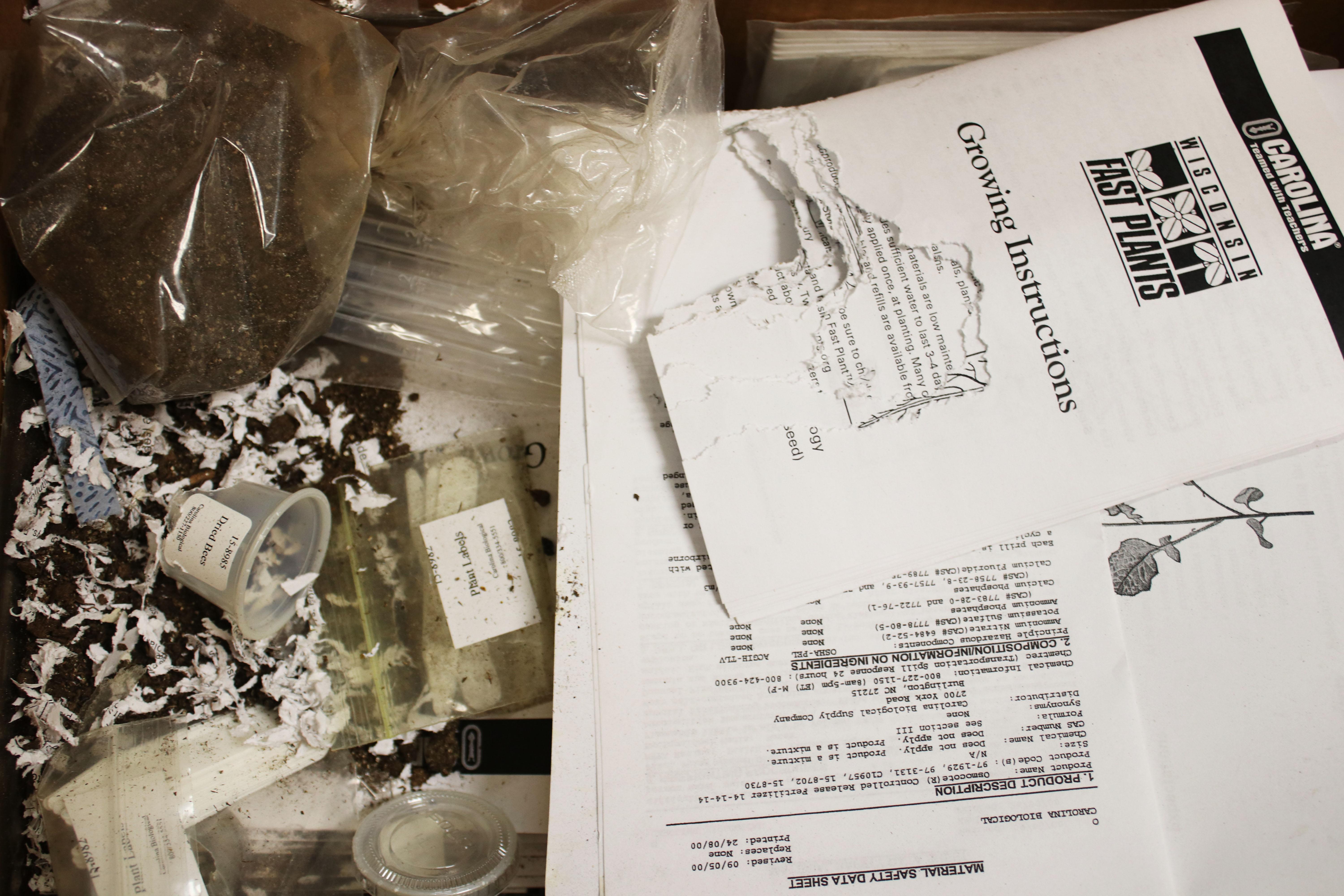 Photo: A mouse entered a supply box in the store room behind room 363 and shredded papers as well as consumed dried bees and other materials.

Photo: A mouse entered a supply box in the store room behind room 363 and shredded papers as well as consumed dried bees and other materials.

Generally, Blair students and staff agree that the best way to prevent mice from being in unwanted places is to throw away trash and food scraps and be mindful while eating. In practice, however, these actions are not as widespread. Lamphier has noticed an increase in leniency when it comes to eating in class. "When I first came to Blair there was a lot of enforcement about no eating in the classroom. I see many more people walking around with sugared drinks, when those spill that's food for the mice," she explains.

Though it may not seem like eating in class causes a large mess, it can be the root of problems because building services only expects to clean up food trash in designated areas such as the SAC and Blair Boulevard.

What Can We Do
Lamphier and Earle understand that often it is necessary for students to eat during the school day. Earle allows her students to go out to the hallway if they want to eat, to avoid the desire to eat in the classroom. "I let them any time they need to, one at a time," she explains.

Earle's concern is the lack of options the school has once preventative measures have been taken and traps have been set. She is constantly on edge that mice are out, and wonders if the mice that are not in traps are alive, or have left. "They have adapted to survive. If they are not in the traps, where did they go? Are they still here?" she wonders.