A look back at the finales of Blair's spring sports

Unlike last year, this spring season brought mostly lackluster playoffs to center stage. The season certainly didn't end the way any Blazer athlete would have liked. Baseball and boys' and girls' lacrosse did not make it as far as they did last season, while softball was the only team that made it to exactly where they were last year but faltered once again, yielding zero state championships this season. Let's now take a look at how each team fared in its respective bracket.

Softball (fourth round out of six)

Blair's softball team took the worst loss out of all the spring sports. They had an incredible season, losing only two games, which earned them a first-round bye and a spot as the number two seed in their section. Their first game was against Paint Branch High School's Panthers who had given the Blazers a run for their money earlier in the season. Once again, the Panthers kept the game close all throughout the game, but in the end, the Blazers came out on top 3-2.

The Blazers played their next game against the Urbana Hawks, a team from Frederick County Public Schools. The game had to be postponed several times because of the rain, but Blair eventually played Urbana and beat them handily 8-2. However, because of the delays, Blair was far behind in the playoffs, and the team was forced to play another game that same day against the Howard Lions, a team from Howard County Public Schools. This would mark the end of the season for Blair softball, as their fatigue caught up to them against a well-rested team. 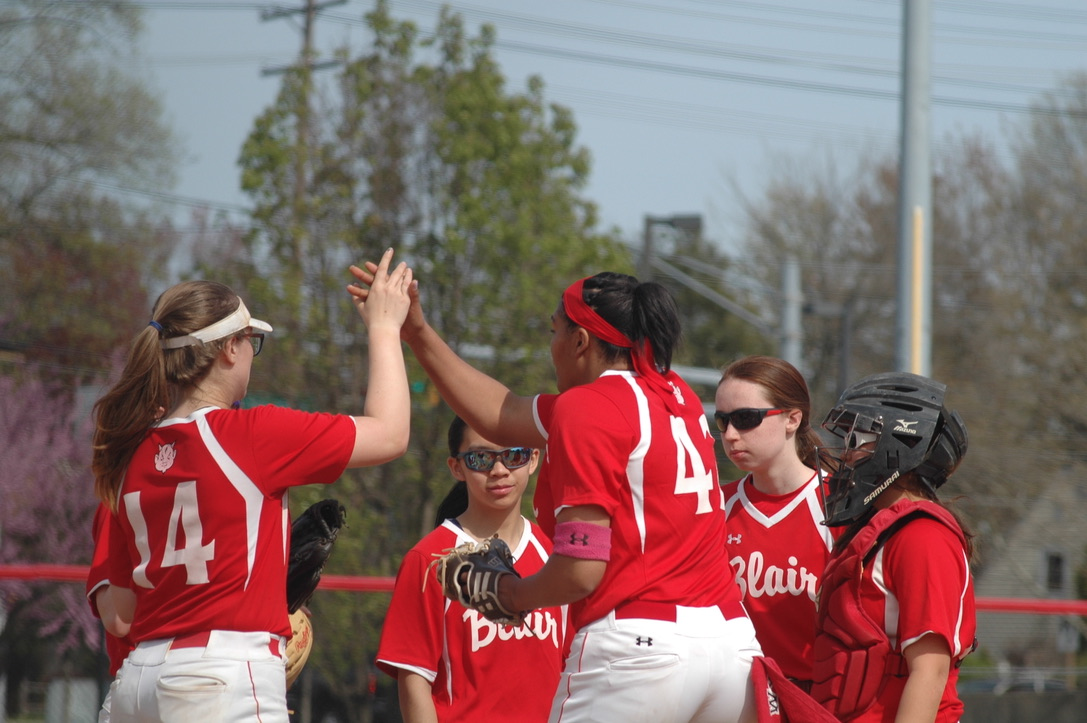 Ready for the Game

Photo: Junior pitcher Courtney Wyche gets ready with her infielders before an inning against Urbana.

Photo: Junior pitcher Courtney Wyche gets ready with her infielders before an inning against Urbana.

Junior pitcher Courtney Wyche kept the team in the game the entire time, but the Blazer offense was weak and lacking throughout the entire game. The Blazers went down quietly 2-0. This was a disappointing end to the season as many expected Blair to go all the way and win the state championship once the Sherwood Warriors, one of the two teams that beat Blair during the regular season, lost to Urbana.

Blair's softball team couldn't take advantage of a glorious opportunity, and now it has them sitting at home, waiting for the next season to start. The Blazers are losing all of their senior core players next season, but with Wyche in the circle, there is always a chance for the Blazers to do something special in their next games.

Baseball (second round out of six)

Blair's baseball team seemed poised to be the underdogs that could make a run to the state championship this season. Although they had a tough regular season, the playoffs were a whole different animal. As expected, the Blazers made quick work of the Northwood Gladiators with a dominating 14-0 win.

What came in the next round was a matchup against one of the most unexpected teams of the year, the Urbana Hawks. It seemed like the Blazers would be able to take advantage of a team who was looking past them to the next round against an idle Sherwood Warriors team. Unfortunately for the Blazers, they couldn't figure out their offense all day and got defeated in a depressing 8-0 loss. Although the team wasn't expecting to do as well as they did last year, they were hoping to take advantage of the fact that teams often underestimated them.

The baseball team, like the softball team, is losing several core seniors next year; almost the entire starting lineup is leaving. Nevertheless, hopefully the Blazers will be able to overcome this roadblock and use it to their advantage.

Boys Lacrosse (first round out of six)

Boys' lacrosse had a really tough season this year. They managed to defeat only the teams that they were already expected to win. With no upsets, this season earned them a low six seed in their section and a matchup against a robust Paint Branch Panthers team that had already crushed them earlier in the season. The Blazers were going to need a miracle to even advance past the first round. As expected, they just barely lost to the Panthers 9-6. It was a disappointing end to a disappointing season, and it looks like it will take some good practice time to step up their game significantly in the coming season.

Girls' Lacrosse (first round out of six)

The girls' lacrosse team had an unfortunate season. They won only one game, and it was against the only winless team in the state, the Northwood Gladiators, earning them a first round matchup against the Paint Branch Panthers who had pounded them earlier in the season 15-3. In short, the Blazers were going to need the Panthers to forfeit in order for them to advance. As expected, the Panthers destroyed the Blazers 16-5 and moved on to the second round. Like the boys' team, it appears that the team may encounter more struggling seasons in the future.

None of the teams could put together seasons that were as strong as last year's. Both lacrosse teams had made it to the final four teams last year, and both baseball and softball took tremendously heartbreaking losses when they were one of eight teams left in the state. Hopefully in years to come, Blair's spring sports teams will be able to find a rhythm and win a state championship for Blair, a school that has not held one in many years.