Reporters to the rescue

They live right next door to Blair, but we only see them in the case of an occasional third-floor fire or a false alarm. We, Lily Alexander and Vicky Lai, two valiant Silver Chips staffers, decided to pay a visit to our friendly next-door neighbors at Silver Spring fire station 16 and, instead of asking for a cup of sugar, ask for a ride on the big red trucks. 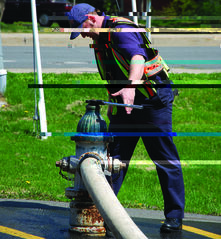 Photo: The master firefighter works on refilling the water supply in the fire engine after the first call.

Photo: The master firefighter works on refilling the water supply in the fire engine after the first call. Photo courtesy of Nick Grossman.

Technically, the 24-hour shift for firefighters, which they work once every three days, starts at "0700," or 7 a.m., with a briefing. At that time, though, we were still sleeping in and failed to report for duty. If we were there, we would've checked the engine and ambulance apparatus for an hour and then worked on developing our muscular biceps by lifting huge barbells and running a few miles on the treadmill in between each set. We probably could've taken on the treadmills, but the Everlast punching bag only budged a few inches when Lily threw her hardest punch later in the day.

In another person's boots

We actually arrived and started our shift at 1200 (a much more reasonable time for two sleep-deprived teenagers), which started with our own kind of briefing on the way the station operates. After meeting all the guys in the "C shift" (A, B and C take turns every three days) and talking for a while, the excitement began - Vicky was going to be an emergency medical technician (EMT) and Lily was going to be a firefighter. The first call at 1315, or 1:15 p.m., was Vicky's. She soon discovered that riding in the ambulance on an 80-degree day was like riding a burning roller coaster - and that was without the uniform.

Though her heart was beating fast (good thing she was in an ambulance!) and her stomach queasy from a crazy ride and fear of gore, there was no reason to be so worried. The first call was only a minor car accident, and the patient just wanted to go to the hospital to get things checked out. She hoped for a more exciting call next time - she had heard that picking up drunks happens more often when the weather warms up. 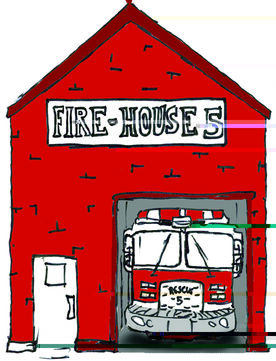 Photo:
Meanwhile, while Vicky was out saving lives (well, figuratively) in the ambulance, Lily had been given the honor of riding in the engine between the two firefighters in the back. The call was a mechanical fire on the side of the Beltway, and as the fire truck zoomed through the Beltway traffic, the captain called back to her to put on the headset. Lily's shiny blue headset was the evidence she needed: She was a true firefighter. When they arrived at the scene, the hood of the car was ablaze and smoke billowed out. The firefighters jumped out, uncoiled the hose and quickly put out the fire with a combination of water and foam in a mere five minutes. The family that was in the car had gotten out in plenty of time, so they were all unscathed. As drivers along the Beltway were rubbernecking from their cars to check out the commotion, Lily was there on the scene, far from a bystander: She was given a neon-colored vest to wear and investigated the scene herself. And with her last approving look after checking out the scene, the crew was off!

For the next call, Vicky wanted a little moral support in the ambulance and dragged Lily along for the ride. Still no drunkard, but we did end up at McDonald's. Apparently, someone had chest pain (the unhealthy fast food, perhaps?), but Prince George's County Fire and Rescue beat us to the call! We had to leave empty-handed, but Vicky breathed a sigh of relief that the second ambulance call was just as mild as the first.

After arriving back at the station after our uneventful run to McDonald's, we leafed through the newspaper and conversed with the other firefighters about the day's calls. If we had exerted any real effort, we would have quickly joined the captain on the leather couches for a short power nap. But our weary eyes bolted open with the sound of passing police sirens - but fortunately, the call wasn't for us, and the captain instead delegated us the task of riding with the EMTs in the ambulance to get dinner.

As we rounded into the Giant parking lot, Lily realized that she could get some grocery shopping done at the same time. (Her mom had been bugging her all day about grocery shopping; wasn't being a firefighter more important?) Lily's shopping extravaganza was interrupted, however, when one of the EMTs said, "We just got a call." Lily threw her vegetables on the conveyor belt, her yellow pepper spinning out of the plastic bag, and we underwent a rapid transformation from normal shoppers to EMTs dashing out to save a life. Todd, one of the firefighters on our shift, said this kind of transformation is an everyday occurrence. "We go from 0 to 100 in a heartbeat," Todd says.

Despite all of our EMT experience from the trip to McDonald's, we decided to stay on the sidelines during the ambulance call. During the drive to the hospital, Vicky accidentally fell asleep on the job (oops) and woke up to find that the ambulance ended up all the way in Washington, D.C., at the Children's Hospital. Meanwhile, Lily distracted the driver, a Blair alumnus, by conversing about Blair teachers they had both had.

Exhausted by the time we returned to the station, we decided to retire at 1815, completing only a quarter of our 24-hour shift. If we had stayed, we would've worked out some more after 9 p.m. and then headed to the dorms. The sirens would probably sound a couple times throughout the night, and the firefighters would have to flip over our bunks and ridicule us for sleeping through the ear-shattering alerts! 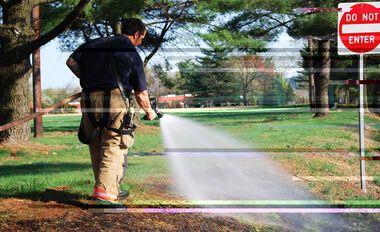 Photo: A firefighter extinguishes a brush fire after a long search for the location.

Photo: A firefighter extinguishes a brush fire after a long search for the location. Photo courtesy of Nick Grossman.

Reflecting on the day as she left the fire station, Vicky was glad that nothing life-threatening had happened. The firefighters joked around with each other in the station, but they all understood the serious consequences of their work. "That's the number one goal when you come to work - go home with five fingers, five toes, breathing regular air," Captain William Cooke says.

Fortunately, Montgomery County hasn't lost a firefighter in the line of duty since the late 1970s, though many firefighters face a dramatically shorter lifespan and about 100 to 125 throughout the nation die each year.

As Lily left the fire station and drove to the Giant to pick up the needed ingredients for dinner, she was thankful that she could go back and buy her yellow pepper that had slipped in the mad dash for a call. And when she got home, she diced it with ease, knowing that the dedicated firefighters at Silver Spring fire station 16 would have her back in her absence and keep the Blair community safe and fireproof.