This is not original reporting. All information has been compiled from The Washington Post. Silver Chips Online posts this news summary to provide readers with a forum for discussion.

Washington Redskins safety Sean Taylor passed away early this morning from a severe gunshot wound incurred during a home invasion on Monday morning. 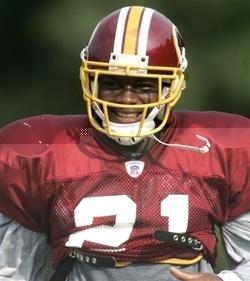 Taylor was injured when one or more intruders broke into his Miami home around 1:40 a.m. According to a statement from Taylor's lawyer Richard Sharpstein, intruders kicked down the locked bedroom door and fired two shots – one missing and one hitting Taylor in the leg, severing his femoral artery. Taylor's fiancée and child were unhurt in the attack.

He was airlifted to Jackson Memorial Hospital where he was listed under critical condition after undergoing seven hours of surgery. Taylor suffered massive blood loss which doctors feared could lead to brain damage, but family and friends remained optimistic, especially when Taylor allegedly responded to doctors with facial expressions and squeezed the doctor's hand when asked. He never regained consciousness.

Police have not yet disclosed any possible suspects.

Though officials have made no formal connection between the two incidents, the shooting comes eight days after a break-in at Taylor's home. According to a police report, the intruder pried open a front window, went through drawers and a safe and left a kitchen knife on a bed.

Though Tuesday is usually a day off for players, most of Taylor's teammates are expected to arrive at Redskins Park to grieve. The Redskins have already begun coordinating memorials for their fallen teammate both at FedEx Field and Redskins Park. Taylor's jersey number, #21, will be painted in a grass parking area on the right side of the road in front of the guardhouse leading into Redskins Park and as well as on the plaza in front of the Redskins Hall of Fame store on the south side of FedEx Field.

In addition, a candlelight vigil has been planned for 6 p.m. tonight at Redskins Park for fans to express their condolences.

Abdural Asis Nuridan (junior)
"He was the most aggressive player in the NFL, especially at safety."

Nicole Hopkins (staff)
"My condolences to his girlfriend, his baby, his friends on the team. I'm sure there will be some tribute at Sunday's game and he will be greatly missed. It just goes to show that tragedy can happen to anyone, take everyday and live it to the fullest."

Paul Irvin (staff)
"For those who have been fans for a long time, the tragedy is on many levels. He was a talented athlete and most indications showed that he had turned his life around. People who followed him years ago may have considered him a "bad boy." Most of us had doubts and wondered if he could overcome, but fast-forward two years, especially after the birth of his daughter, and he's become a model player, an incredible athlete."

Peter Lorenz (senior)
"At least we know he'll be the hardest hitting man in heaven."

Wendy Rubin (staff)
"The event is very tragic, but I'm curious to hear the details of what happened in that house that night. Until I know that it's hard to know how to feel. I'm not sure who's to blame and hope that he isn't, but he's created some trouble for himself in the past. I also don't think it will be necessary to cancel any games."

Jeffery Seals (staff)
"This is a real tragedy, he was a young man that had so much potential and he was cut down before his time. It's shocking to everybody – not only as a coach but as fan too. He is so much more than a football player – this is a child losing its father. He will be greatly missed in this area and in Florida. I will keep praying for him and my condolences to his family and friends."

Surafel Tesemona (senior)
"He was my favorite NFL player, by far the best safety."