Students for Global Responsibility's (SGR) campaign to promote awareness on the genocide in Darfur continued today with a call-in session on Blair Boulevard across from the guidance office during 5A and 5B lunches.

The call-in was the second of a two-part program being launched by SGR to raise awareness and promote action among students for more U.S. involvement to end Darfur's ongoing genocide. 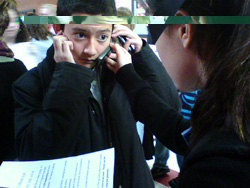 According to SGR member Avi Edelman, students were permitted to use cell phones to call in and read provided scripts to a number of lawmakers that represent Montgomery County, including Senator Barbara Mikulski, Senator-elect Ben Cardin, Representative Albert Wynn and Congressman Chris Van Hollen. The scripts detailed the informal death count of over 400,000 in Darfur and urged policymakers to take action by increasing U.S. military presence in the area.

Edelman reported that by the middle of 5B, over 250 calls had been made to representatives, with mostly positive responses from the four representatives. Although some students had their messages cut short, Van Hollen's camp was "very receptive, and most callers were able to read the entire message," Edelman said. The offices of Ben Cardin and Barbara Mikulski were closed, but students filled up their mailboxes with messages encouraging action in Darfur. The student effort has been so effective, Edelman reported, that the office of Albert Wynn contacted club sponsor George Vlasits to stop the calls, and has agreed to meet with club leaders to discuss possible legislative action. Still, Edelman encouraged students to continue making calls. "If we're jamming their phone lines, they will hear about the issue and take action," he said.

SGR was pleased with event's turnout. "I'm really excited to see Blazers step up to bring this issue to the attention of politicians," Edelman said. "Right now, genocide is not being treated as a political issue, and it's important to remind politicians that students care, that constituents care." 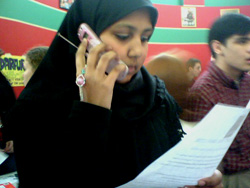 Photo: Freshman Safarah Khan makes a call to a congressman.

Blazers were impressed by the SGR's effort to both press the issue and educate students about the situation. "Even if they didn't know about what was happening in Darfur, students were attracted by the crowd and wanted to know what was going on," said junior Areeb Quasem. "They'd go up and talk to the people running the event, who would then tell them all about the issue and what was happening. It's a really good thing that Blair did this. " Sophomore Xenia Oroxom agreed, stating that Blair's large population offers an advantage in provoking change. "Since Blair is such a huge school, if we get everyone together, then we actually have a huge chance to make a big difference," she said.

Many students thought the campaign would prove to be effective. "I think that this will help, even if only a little," said freshman Julia Skolnik. "It feels good, you feel like you did something."

A presentation from Rebecca Glade, member of the Georgetown University chapter of Students Against Genocide Coalition (STAND) preceded today's call-in campaign. Glade addressed the ongoing genocide in the Darfur region in Sudan at 2:15 yesterday afternoon.

Yesterday's presentation focused on educating students on the situation in Darfur, the first part of SGR's threefold attempt to urge education, advocacy, and donation among Blazers. After a short film and presentation, Glade then facilitated questions from concerned students which ranged from the U.N.'s peacekeeping involvement to what company investments directly fund the region's militarism. Edelman agreed with Glade's assertion that the genocide can be addressed on both ends of the political spectrum. "Its not a political issue, it's a human rights issue and both Democrats and Republicans should do something about it," he said today.