On Friday, Jan. 11, more than 600 federal workers, contractors and their families attended the Shutdown Social at Montgomery Blair High School's cafeteria from 6:30 p.m. to 9:30 p.m. Organized by Montgomery County Councilmember Tom Hucker, the event was an opportunity for the Silver Spring and Takoma Park community to show their support for furloughed federal employees.

The Shutdown Social provided food, entertainment and support for federal workers and helped them realize they are not alone. "This event was set up to show solidarity for all the federal workers who provide federal services but have been locked out of work and have not been paid," Senator Chris Van Hollen (D-Md.) said. 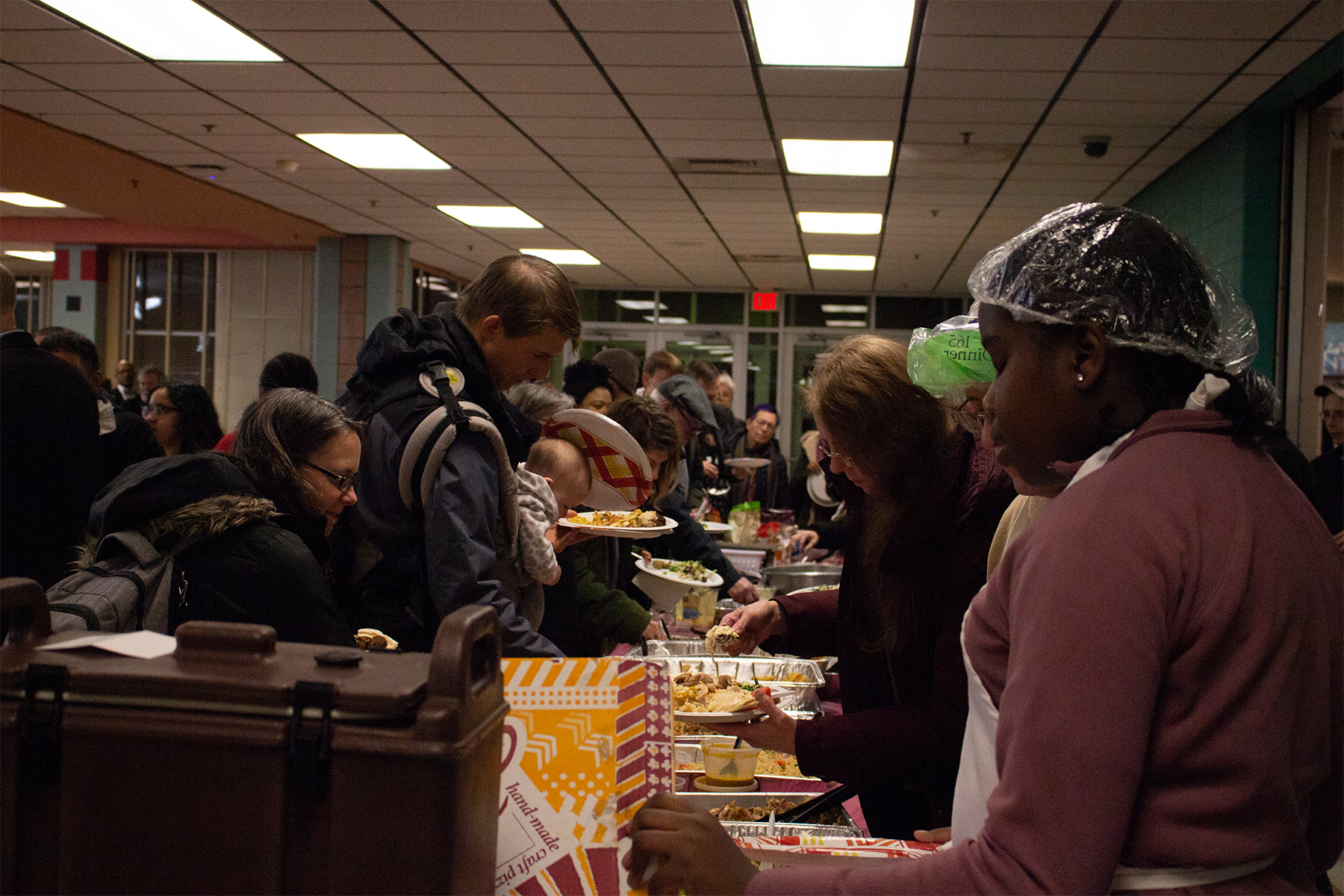 Photo: Volunteers serve food from local restaurants to federal workers and their families.

David McGivern from the Food and Drug Administration attended the event for a "fun social experience" and to see what support and resources were available. "It gets you out of the house because you don't want to go anywhere since you don't want to spend any money," he said.

Seventeen local restaurants, including McGinty's Pub, El Golfo and Ghar-e-Kabab, provided free food and drinks, despite their own struggling businesses. "Business is way down because of the shutdown, but still, a whole lot of restaurants have donated food tonight because they want to step up and support the community," Hucker said.

Musician and labor activist Joe Uehlein organized the night's entertainment, which included a performance from Northwood High School's drumline. "The music was specially pulled together from artists whose music moves people. The hope is it will inspire people to do more to support the federal workers," Uehlein said.

The WSSC, which provides safe drinking water and wastewater treatment to Montgomery and Prince George's counties, is not turning off water for at least the next 45 days so federal workers have water even if they are behind on paying their bills. "Our goal today is to come out for our constituents and let them know we're here for them through these hard times," WSSC employee Misti Prince said. 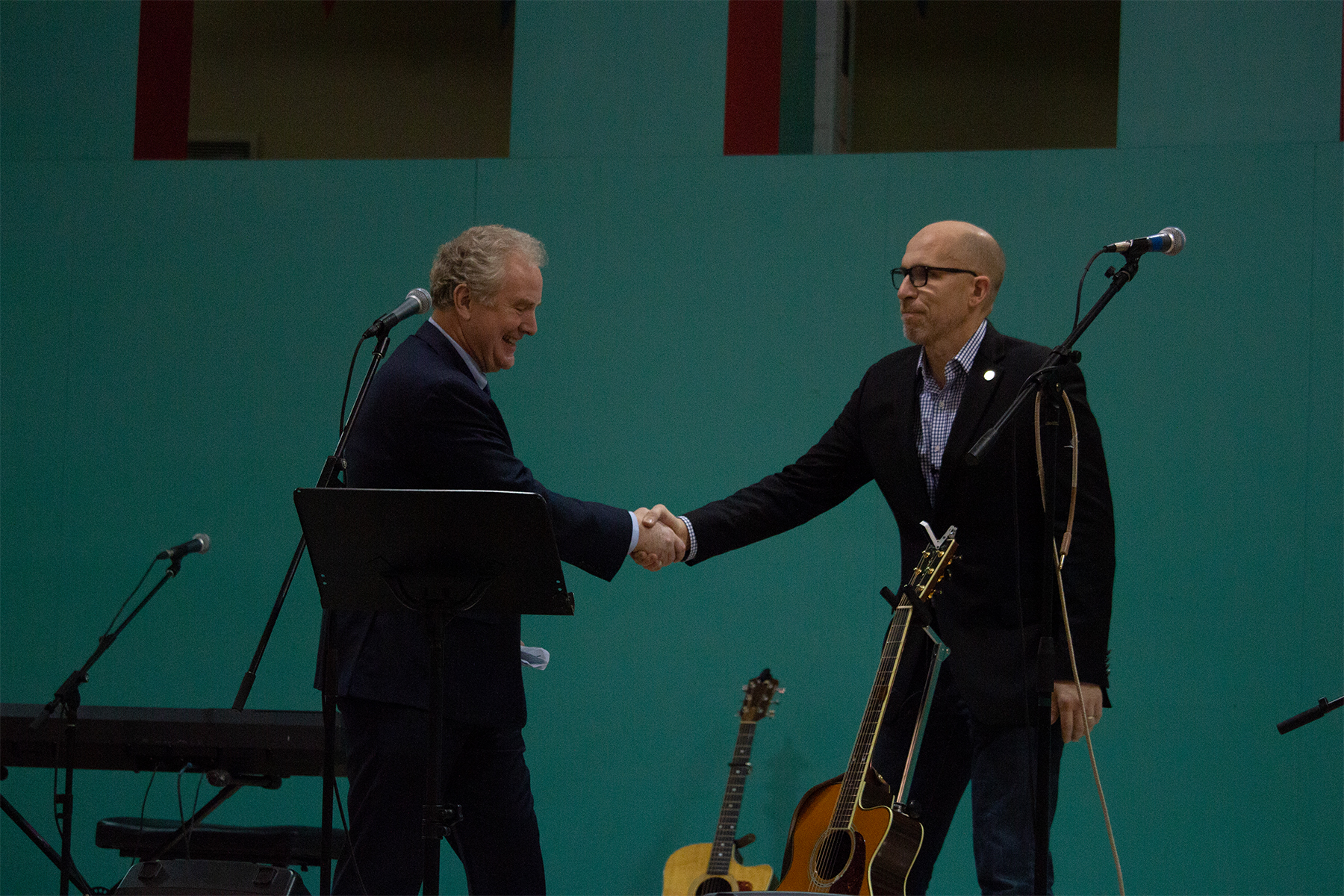 On the Shutdown Social

The government shutdown, now the longest in American history, resulted from a stalemate between President Donald Trump and Democrats over his demand for funding to build a wall along the border of the United States and Mexico. Currently, around 800,000 federal workers are furloughed and did not receive their pay stubs on Friday.

The shutdown has stirred panic amongst federal workers who depend on their biweekly paychecks to pay their bills. McGivern, who has a 14-month-old son, moved to Maryland in October and has yet to sell his old house. "I can't make that house sell any faster, so it's made it very difficult for us. I don't know how long this will go on, so we have to make contingency plans to cover all the bills," he said.

Although a bill passed by Congress on Friday guarantees back pay to furloughed federal workers, the paycheck will not arrive in time for many employees' bills, which range from mortgage to college tuition. "The paychecks have stopped coming in, but all of you know the bills keep rolling in the door," Van Hollen said.

The federal workers, contractors and families at the social bonded over their frustration and worry about the shutdown. "I just hope that something can happen, that [the government] can come to a consensus that can get these people back to work and get America— what did [Trump] say again?—great again. We're not great right now," Prince said.

As the government shutdown enters its fourth week, frustration and panic continue to plague federal workers and their families. However, at least for one night, they were able to find support and relief from their community.