The excitement surrounding the US Open has already begun as major competitors are being eliminated in the preliminary rounds. Tennis fans clamor to buy tickets to the famed event, or watch the matches on television in the evenings. However, this excitement surrounding tennis was missing when, a few weeks ago, Washington, D.C hosted the annual USTA tennis tournament for the region: the CitiOpen. It is part of the U.S Open Series, a seven-week summer tennis season linking twelve Association of Tennis Professionals (ATP) World Tour and Women's Tennis Association (WTA) Tour tournaments together. Hundreds of tennis fans poured in to watch their favorites play. Many internationally known players such as Grigor Dimitrov, Venus Williams, Leander Paes, John Isner and Milos Raonic competed for the title. However, missing from the scene were several of the world's top players such as Serena Williams, Victoria Azarenka, Novak Djokovic, Roger Federer and Andy Murray. These players are never seen missing a grand slam, so what makes a smaller tournament different? Is it the low-key culture behind these smaller WTA and ATP tournaments, or the lack of substantial ranking points and prize money? 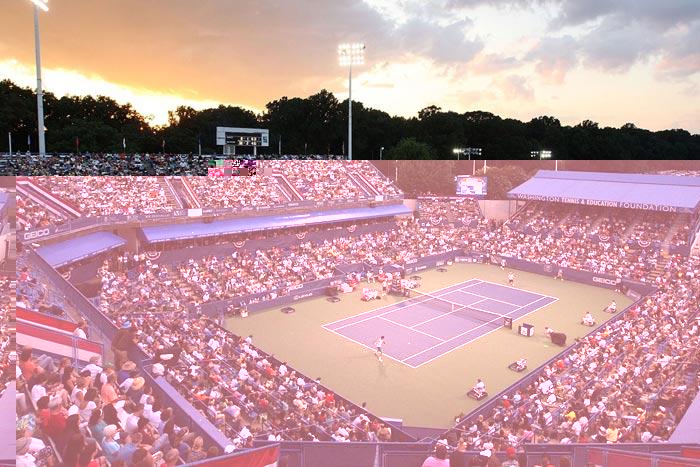 Photo: The CitiOpen was held in the William H.G FitzGerald stadium in D.C.

Photo: The CitiOpen was held in the William H.G FitzGerald stadium in D.C.

The culture surrounding the four major grand slams—the French Open, the Australian Open, the U.S Open and Wimbledon—is one of reverence and fame. Young players dream of one day playing at center court at Rolland Garros or Wimbledon; pros work towards one day lifting the famed trophies.

An average of 14,000 people come to watch the semi-finals and finals of the grand-slams (not counting the many thousands more viewers on TV), giving those who make it to those elite levels instant popularity. The FitzGerald stadium, where the CitiOpen took place, had a capacity for no more than 7,500 seats. Even during the men's singles final, usually considered to be the most popular event in a tournament, only three-fourths of the stadium was filled. So although a trophy is still a trophy, lifting it in front of nearly 20,000 people—versus lifting it in front of a third of that many—would have a considerably different effect on a player's sense of accomplishment and pride; especially for the elites, who have already won a grand slam. There's also the factor of accumulating WTA and ATP points to rise in the rankings.

A Grand Slams singles title earns the champion 2,000 ATP ranking points, whereas a smaller tournament usually aggregates them around 100. Statistically speaking, this makes a Grand Slam 20 times as important as a smaller tournament. Moreover, players can only count their best six results from tournaments, besides Grand Slams and eight Masters events towards their ranking, which discourages participation in smaller events. Also, top players usually weigh this into consideration in their training; they make the tradeoff between spending more time training for the Grand Slams and missing a smaller tournament. Meanwhile, other players who rank anywhere from the bottom of the top 10 to the bottom of the top 50 attend the smaller tournaments, as they feel the need to vie for any amount of points they can obtain to maintain their rankings. As with any sport, there is a lot of money involved with the larger tournaments as opposed to the smaller ones.

The total prize money for the Australian Open, Wimbledon, the French Open and the US Open is, respectively, $33 million, $42.3 million, $34.5 million and $38.3 million. By merely making it to the fourth round of any one Grand Slam tournament, a player earns $100,000. The CitiOpen, in comparison, had a total men's singles prize money of 1.6 million dollars, making the victor of a Grand Slam title around 20 times richer than the victor of a smaller tournament. Although $1.6 million is no meager amount to the average person, it is to elite players, whose expenditures on expensive training programs, state-of-the-art facilities and experienced coaches detract majorly from their earnings from smaller victories.

A combination of an unattractive number of points, smaller prize money, as well as a lack of renown that besots the smaller tournaments keeps the elite away.