snoWatch: bigger, better than ever

With the threat of snow approaching, we here at the Silver Chips snoWatch team would like to propose a system we feel would benefit MCPS snow team (since we are the ones with real experience).

We would like to present our designs for snoWatchers, new robotic eyes, ears and noses (although they don't need ears) that can decide whether or not we should have school. 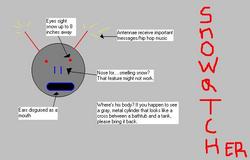 We have constructed a prototype of this device, and we're happy to report that it is fully operational. In fact, we had enough time to test our robots and our preliminary data indicated the following:

MCPS, feel free to drop us an email to order these snoWatchers any time, although we have a half-price deal up until Mar. 1.

But seriously folks, we could be looking at anywhere from three to six inches of snow tomorrow. That's the good news. The bad news is that most of this snow will be accumulating during the day, since it won't be starting until dawn. This one could be a real toss-up.

Keep your fingers crossed, your bodies snow-dancing and your pajamas on backwards tonight, and we should get lucky tomorrow.

Vivek Chellappa. As Vivek beings his final year in Blair, several new hobbies draw his attention: his passion for standup comedy and making lists with only one real piece of information. Vivek has recently developed a strong liking for the works of Mitch Hedberg, Dave Chapelle and … More »

Ely Portillo. Ely Portillo will make up 1/4 of the editors-in-chief this year, rounding out a journalistic dream team of never before seen talent and good looks. His meteoric rise to fame and fortune will be dramatized this year in the highly anticipated movie <i>The Cream Cheese … More »