After being down 5-0 at the end of the third inning, the varsity softball team found its rhythm to come from behind and defeat the Northwest Jaguars 8-5 on Blair's senior night.

What head coach Louis Hoelman describes as a characteristically "streaky team all season" began the night with a bumpy start. With junior Rachel Nicholson on the mound, the Blazers made costly fielding errors, setting up the Jaguars for a two-run lead by the bottom of the first inning. 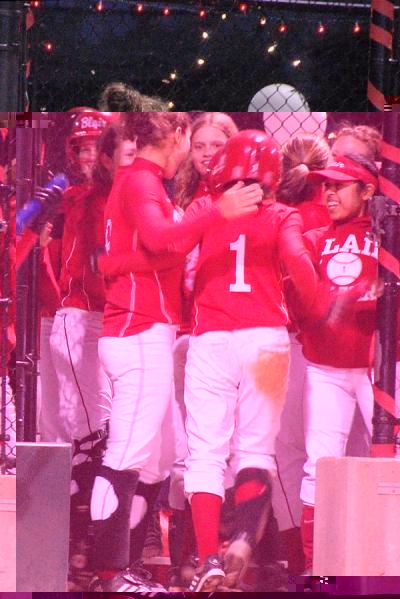 Photo: Players congratulate junior Xenia Oroxom for her massive hit, which allowed three Blazers to score and gave Blair its first lead of the game.

Photo: Players congratulate junior Xenia Oroxom for her massive hit, which allowed three Blazers to score and gave Blair its first lead of the game.

Blair's troubles extended to their offense as the team was unable to convert opportunities into runs. With two runners on base and two outs, Blair ended the first inning as freshman Eve Brown's pop-fly into right field was caught.

Strong pitching from both sides made the second inning a short one as Nicholson and the Jaguars' pitcher retired the first three batters on both teams.

Northwest continued to dominate on offense into the third inning, racking up three additional runs. Again, the Jaguars capitalized on Blazer errors to get runners into scoring position. Back-to-back hits, first a one-run single to right field and then a two-run single into deep right field brought the score to 5-0 by the end of the third inning.

After the game, Hoelman commented on the team's shaky start. "It took us a long time to get started," he said, "but we believed that we could come back and win."

Though the Blazers were unable to step up offensive production to answer the Jaguars' three-run inning, strong pitching in the fourth held the Jaguars scoreless.

Coming off a strong defensive outing, the Blazers finally found their offensive rhythm with a lead-off single by senior captain Hilary Bragg. A Jaguar error turned freshman Emily Haislip's grounder into another single. With Brown at bat and men on the corners, Haislip was tagged out on a double steal play, which brought Bragg home for the Blazers' first run of the game. Nicholson followed with an RBI to bring the tally to 5-2 going into the fifth inning.

Brown stepped in to close the game and allowed only one hit in the next two innings.

Blazer bats again fell silent in the fifth, but were revived in the sixth, starting with a single off of a bunt by freshman Blake Morgan-Gamber. Bragg followed with a grounder up the middle. Haislip continued the trend when her infield hit was dropped to give her the single RBI. Brown followed with a sacrifice hit to bring in Bragg. With a huge hit into deep right field, Nicholson brought in Haislip to tie the game at five all.

Making up for the lack of offense early in the game, the Blazers remained unstoppable in the sixth. The Jaguar pitcher began to show clear signs of fatigue, and walked the Blazers' next batter, junior Caitlin Ludington. With men on first and second, senior captain Eve Kenney recognized the weakness to get a base-loading hit into right field. 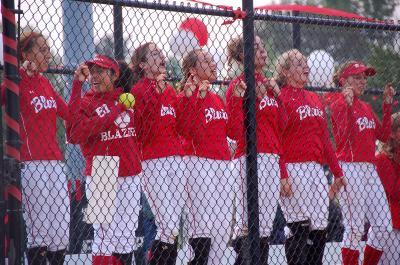 Photo: The Blazers cheer on their teammates with enthusiasm on senior night.

Photo: The Blazers cheer on their teammates with enthusiasm on senior night.

With the game on the line, pinch hitter Xenia Oroxom stepped up and delivered a base-clearing blow deep into centerfield to put the Blazers over the top, 8-5.

The Jaguars threatened to come back in the seventh, starting the inning with a double off of a fielding error and a walk. But Brown retired the next three batters to clinch the Blazers' come-from-behind win.

Commenting on the game being played in honor of her and the team's two other seniors, Kenney and senior Katie Scott, Bragg was impressed with the team's resiliency. "It was nerve wracking being down 5-0, but somehow we pulled the comeback…no one stopped believing," she said.

The win is the Blazers' third in a row, a welcome trend leading into the end of the season and playoffs. "I knew this team was going to come together," Hoelman said. "The main thing we need to work on is we play well in parts of game, but we need to put it all together for the playoffs."

The Blazers play their final home game Monday, May 5 against the Whitman Vikings at 7 p.m.