On May 15 of last year, Blair exited the playoffs with unfinished business after suffering a 7-4 defeat to the Clarksburg Coyotes. Yesterday afternoon was a different story, as Blair (11-0) pulled away early and defeated the Coyotes (5-2) by a score of 11-6. 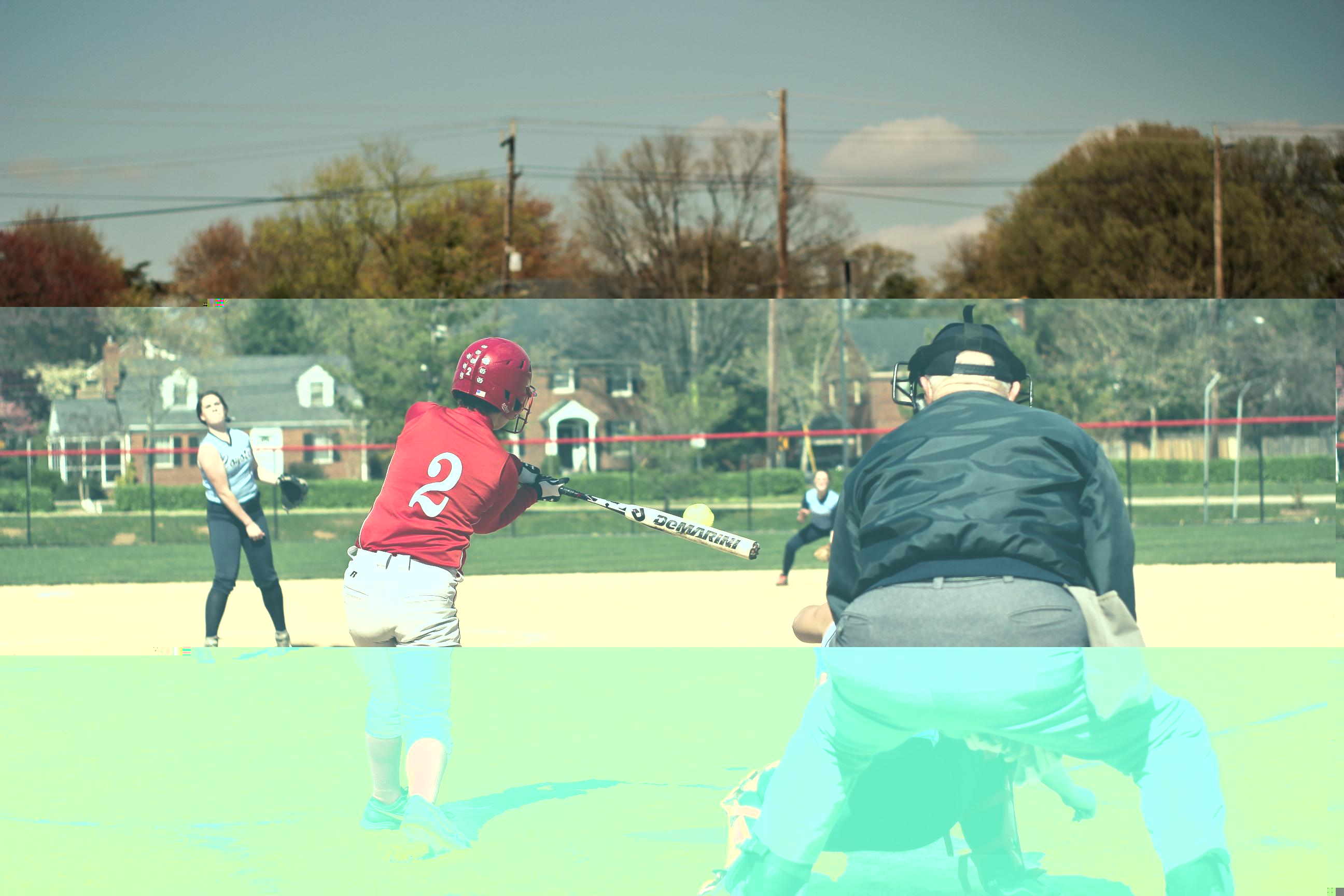 Blair was officially the away team despite playing at home due to the postponement of a game that was supposed to have been played at Clarksburg, so it batted first. The Blazers' offense wasted no time. Sophomore Mildred Devereux led the game off with a line drive single over the shortstop's glove. She advanced to second on a sacrifice bunt by junior Andrea Brown, moved to third on a wild pitch and then scored on an RBI groundout to second by senior Annie Pietanza. With two outs, senior Michelle McGhee made an unusual round of the bases. She singled to right, took second on a passed ball, stole third and then scored on a wild pitch.

Head coach Louis Hoelman explained his team's philosophy of forcing the issue on the base paths. "As base coaches, we tell our players that we're only going to try to stop them. Otherwise, they should be running aggressively all the time," he said.

In the bottom of the first, Clarksburg manufactured a run of its own. After the leadoff hitter grounded out, the second batter singled to right, stole second, advanced to third on a groundout and scored on a wild pitch. With two outs and a run in, Clarksburg recorded another single; however, catcher Maria Cruz gunned out the runner attempting to steal second. Blair returned to the dugout still ahead.

Only one player reached base for either team in the second�a Clarksburg player on a one-out walk. The game looked destined to be a pitcher's duel, but in the top of third, Blair ensured that that would not be the case. With one out and Devereux on third, Pietanza hit a fly ball that dropped in the right-center field gap for an RBI double. Then, with two outs and runners at the corners, junior Kerry Madden hit a two RBI triple that rolled to the wall, putting Blair ahead 5-1.

In the bottom of the third inning with runners on first and second, a Coyote batter hit a chopper to Devereux at third. She stepped on the bag before firing over to first for an inning-ending double play.

Clarksburg scored a controversial run in the fourth inning. With a runner on first, a Coyote hitter appeared to have grounded into a fielder's choice to second. The field umpire called the runner out; however, the home plate umpire overruled the call. Clarksburg then scored on a two-out single.

Blair scored three more in the top of the fifth inning with four singles from Brown, McGhee, senior Susannah Merrill and junior Camilla Arias. Blair also had the help of a Clarksburg error. Clarksburg subsequently went three up, three down in the bottom of the inning.

In the top of the sixth, the Blazers added another three runs. Senior Susannah Merrill led off with a swinging bunt single and then advanced to second after the Clarksburg pitcher threw the ball to the right field fence. Devereux stepped up next with a single and then Brown grounded out to score the run. The two ensuing batters�McGhee and Pietanza�hit RBI doubles. 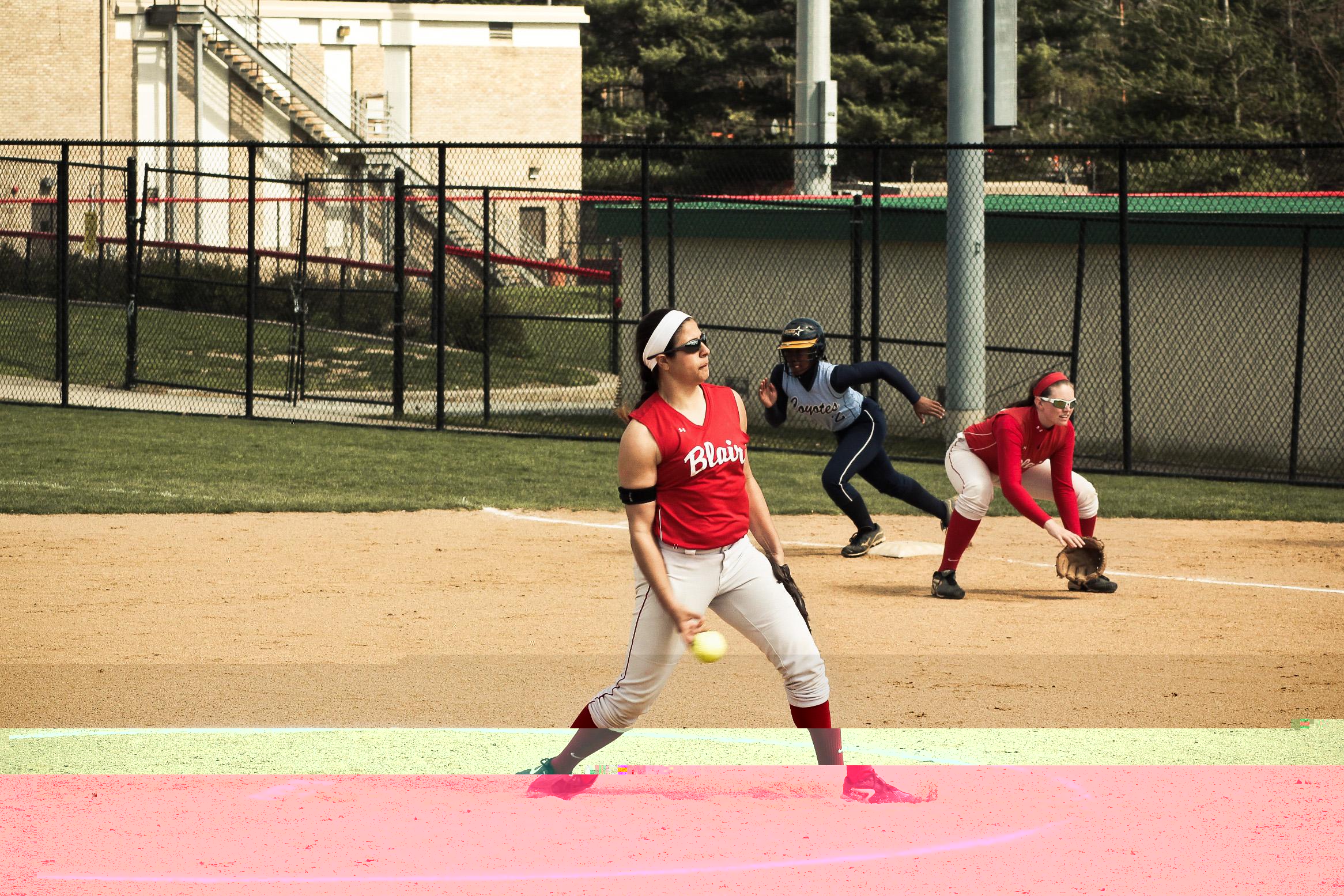 Clarksburg scored one run in the bottom of the sixth and then started a three run rally in the bottom of the seventh, but it was too little too late. Starting pitcher Pietanza pitched a complete game, nothing to Hoelman's surprise. "Annie [Pietanza] is one of the best pitchers in the county," he said. "She's also a very clutch pitcher. She pitched herself out of some difficult situations, with the defense behind her helping her out."

Blair beat Clarksburg in the regular season last year before losing in the playoffs. Hoelman expects his team to have a different mentality going into this year's post-season. "We are going to make sure that we are confident and we are relaxing enough to play like a regular game."

Editor's note: Blair moved to 11-0 after defeating Poolesville 12-2 in its second game of the day.