Comedy is typical, but rather entertaining

That's right, despite being similar to many "feel-good" flicks, "In Good Company" is actually entertaining and often very funny. The film, directed and written by Paul Weitz, is cheery, although admittedly shallow and focused on the lighter side of generation-gap clashes. 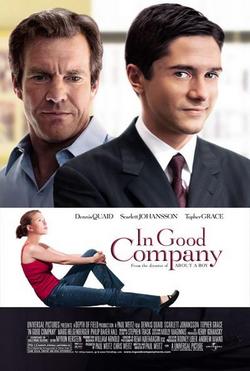 Dan Foreman (Dennis Quaid) is a successful middle-aged sales-ad executive at a large magazine company, as well as the patriarch of a nice wholesome family. Everything is sound and secure until he finds his business and home lives conflicting with each other.

At home, Dan's wife Ann (Marg Helgenberger) is pregnant, and his daughter Alex (Scarlett Johansson) has just been accepted into New York University. Since both his wife's pregnancy and his daughter's tuition require a significant amount of financial backing, Dan is all the more shocked when he's demoted to a company wingman and replaced by the young and inexperienced Carter (Topher Grace), due to a take-over by another business. Not only does Carter become Dan's new boss, Carter also affects Dan's family life when he begins to secretly date Alex after his wife Kimberly (Selma Blair) leaves him.

Though Carter has managed to snatch away both Dan's dream job and the affection of Dan's darling daughter, Carter isn't quite the sinister menace he would seem. Actually, Carter is one of the comic highlights of "In Good Company," an incredibly awkward, goofy guy who happens to have been thrust into Dan's life in a not-so-charming manner. What makes Carter's absurd nature such an amusing part of the film is Grace's performance; he carries the role with an earnest, humorous delivery that steals the show.

In his very first appearance, Carter shows up in an important business meeting, looking every bit the serious professional with a dark suit and a stiff posture. However, instead of being stern and dignified, Carter is wired and energetic as he talks about the latest product he's picked up for the company, dinosaur-shaped cell phones for toddlers, fully put together with ring tones that emulate the sounds of species ranging from the tyrannosaurus rex to a pterodactyl. Even funnier than this quirky creation is the way Carter pitches it to his colleagues explaining that ".02 percent of all cell phone users are under five" and that therefore dinosaur phones are the way to market this demographic. The hilarity of this scene is crystallized in a single moment where Carter says in a timid sing-song voice, while holding up one of the cell phones: "Mommy, I want one, buy me one for Christmas."

"In Good Company" doesn't rely on the exuberant styling of Carter alone. Quaid is just as endearing in his role as Dan, providing family humor easy to relate to from ruining the family's dinner to off-the-wall scenes of threatening to neuter the boyfriend of his teenage daughter Jana (Zena Grey).

Even better than Quaid and Grace are the two together. When the duo come on screen there is a great deal of tension. Surprisingly, witty exchanges between Carter and Dan result in the two becoming better friends than they ever expected.

Another fortunate collaboration of comedic characters is present in the film's company meeting scenes. Carter's young attitude and views of corporations contrast greatly with that of the older members of the company, and the environment of these tongue-in-cheek incidents never fails to hit the funny bone.

While the jovial tone of "In Good Company" manages to go beyond soft and safe, the same can't be said of the film's dramatic portions. The screenplay includes occasional serious material concerning romance, family and work. However, most of the emotional situations in "In Good Company" are heavily clichéd.

Despite the film's main cast giving strong performances, even they can't make do with this disappointing aspect of the film. The romance between Carter and Alex particularly demonstrates this point: Johansson and Grace have convincing chemistry, but their relationship is hopelessly sappy. In the end, the most emotionally effective part of the film are the few songs by the folk group Iron & Wine that are a part of the film's soundtrack. They tenderly narrate what Weitz's script could not.

"In Good Company" may be too sweet for some, but to most, it is a welcome chance for amusement. This lighthearted comedy, unlike much of mainstream cinema, actually puts viewers in a feel-good mood.

"In Good Company" (109 minutes) is rated PG-13 for some sexual content and drug references. It is now playing everywhere.