Songs of the Summer

A closer look at how summer hits come to be

Every summer has had a hit song, and whether you like it or not, you probably know most of its lyrics. In 2010 it was Katy Perry's "California Gurls", in 2012 it was Carly Rae Jepsen's "Call Me Maybe" and in 2016 it was Drake's "One Dance". The "song of the summer" is usually a pop song that you may not love, wouldn't find yourself listening to on your own, but it's the one you always sing along to loudest when it plays on the radio.

Additionally, the song usually has to last a couple weeks on the top of the Billboard Top 100 hits, and hit its peak at just the right moment. The song of the summer gets released in the spring, and finds its way to the top as soon as possible so that by late July or early August many radio listeners are completely and utterly sick of the song.

Most "songs of the summer" have certain characteristics. They are annoying from the start and the constant bombardment by every single pop radio station makes it even worse. The elements that keep this song alive are its catchy-ness and the fact that everyone is always singing and dancing along no matter how much they hate it. 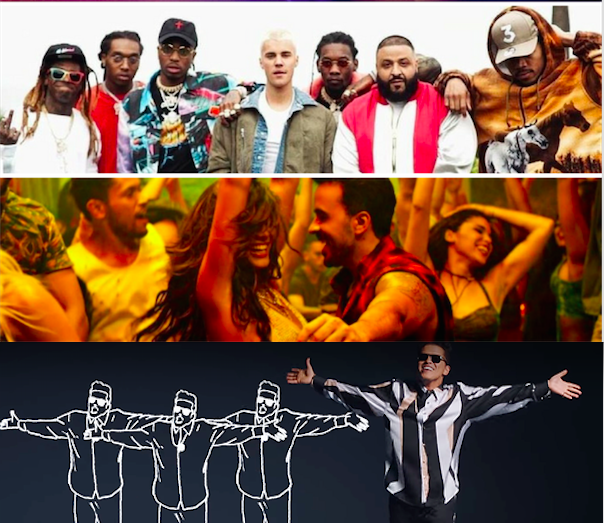 Photo: "Im the One," "Despacito" and "That's what I Like" are all contenders for the hit song of summer 2017

Photo: "Im the One," "Despacito" and "That's what I Like" are all contenders for the hit song of summer 2017 Photo courtesy of HuffingtonPost and Fuse.

Hearing this song later in life is when you'll come to appreciate it most. You'll forget how much you hated it and how annoying it was. It will make you nostalgic over summers past and take you back in time. Take "Call Me Maybe" for example, a song we all could have used a little less of. But five years later it makes us chuckle over middle school relationship angst and becomes a catchy whose words we already know.

On rare occasions, a song of the summer will actually be good be, no matter how much it's played, or how often. This song possesses the same catchy melody, and unforgettable lyrics as any summer hit, yet is meaningful. No matter the season or year, hearing this song makes you forget how long ago it was released. Beyoncé's "Crazy In Love" was the summer song of 2003, and still lives up to the deserved fame it received 14 years ago.

Now on to the summer hits of 2017 (drum roll please). It's July, and while some critics are still debating, others have made up their mind regarding the song of the summer. In the running, there is "Despacito" by Luis Fonsi with a remix by Justin Bieber, "I'm the One" by DJ Khaled (feat. Justin Bieber, Quavo, Chance The Rapper & Lil Wayne) and "That's What I Like" by Bruno Mars.

All of these songs have potential, but no one seems quite right. "Despacito's" catchy rhythm has taken it to the top of the charts where it has remained for quite some time. Additionally, "Despacito" has become the most downloaded song this summer, yet there is one factor that still holds it back from being the obvious "song of the summer." As bilinguality is not ingrained in many Americans, many are still having trouble fully grasping the lyrics to this latin pop hit.
"I'm the One" appeals to a wide audience considering the number of well known artists it features. It is simple enough for people to sing along to and gets people off their chairs. It hit the top in May but has been outshined by "Despacito." It has been on the Billboard Top 100 for almost two months, but has been falling slowly down the list.

"That's What I Like" seems to fit the classic summer hit criteria. It's catchy, and slightly annoying, but a song that always finds its way out of your lips each time you hear it in the car. However, this song, released in January, seems to have lost some of its excitement by mid-summer. A song released so early is not likely to remain so popular through the duration of the summer.

While the "song of the summer" is not limited to a choice between these three, we may never know which one is really right until listening to it years in the future and feeling transported back into a 2017 summer haze. A true "song of the summer" leaves you feeling young and free and makes you forget about the stress of the school year or growing up. It is three minutes of bliss you can always count on during which you can let go of everything and relive an entire summer's worth of fun.