After rummaging through old sepia toned photographs, connecting the branches of extended family trees and reading old letters from relatives from generations past, many questions about ancestry still remain unanswered. The secrets hidden even beyond extensive searches through old family documents can be found in the contents of a couple teaspoons of saliva.

Through AncestryDNA and 23andMe, services which use microarray-based autosomal DNA testing combined with historical records and thousands of family trees, Blazers were able to determine their regional backgrounds, find relatives and learn about their genomes.

Sending the DNA
Seemingly the most popular, AncestryDNA was an affordable and easy option for Blazers who completed DNA ancestry tests. AncestryDNA sends all the necessary supplies for the DNA testing. "They send you a box which has all the instructions. You have to fill a tube up with saliva to a certain line," explains junior Zoe McIntosh.

Once the DNA is sent, AncestryDNA requires that users set up an online profile which activates their data and allows results to be sent back. "You go online and activate it. It took about four weeks and then you anxiously log on," describes science teacher Courtney Mason. The website also asks for information that is already known, such as stating if other users who have completed the test are relatives.

Senior Maggie Gray wanted to learn more about her genome, or genetic make-up, through DNA testing. "I've always thought that genetics was really cool, and how you can figure out your genes just from spit,” Gray reflects. Additionally, Gray was born deaf in both ears and was hoping to learn more about the root of this condition. 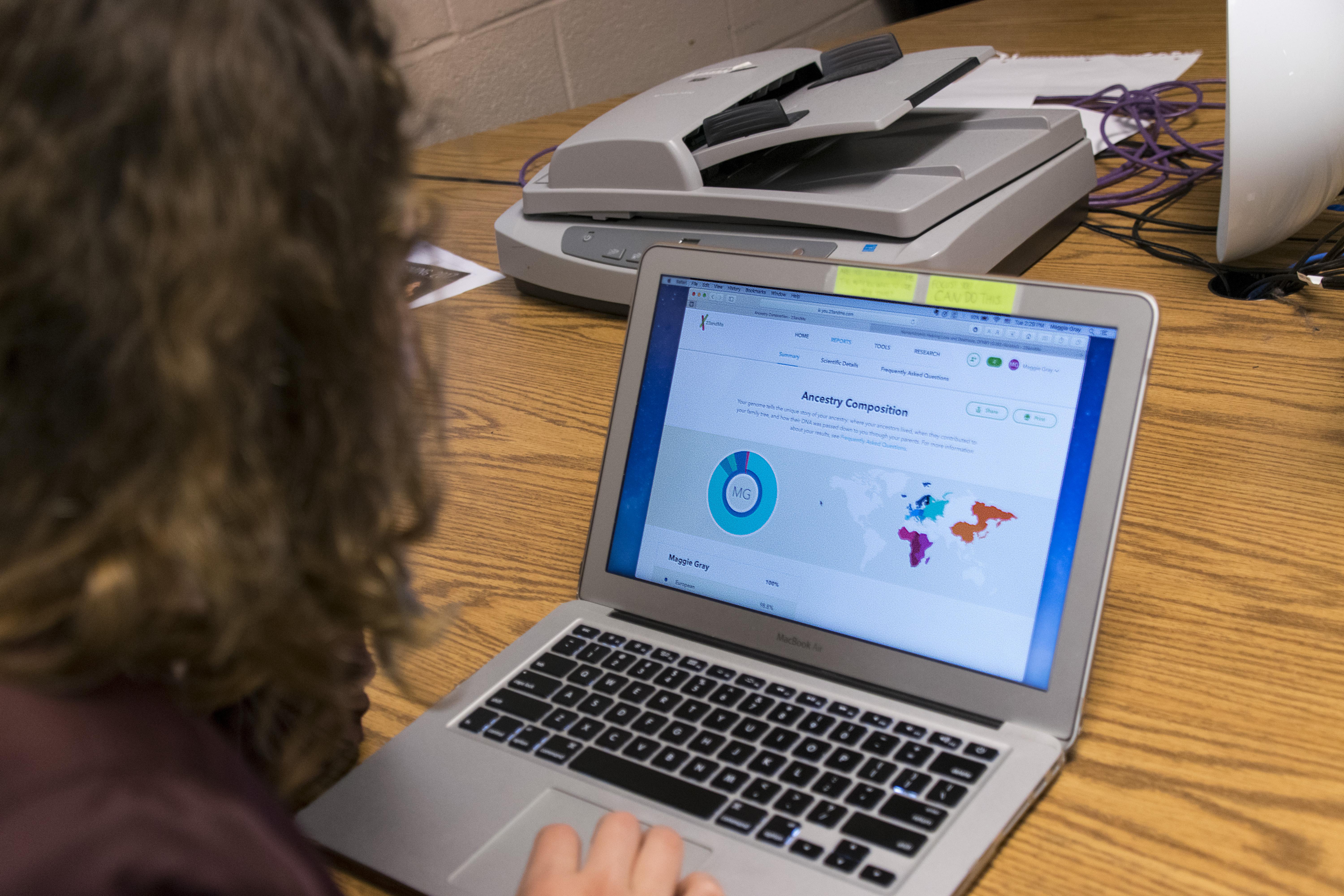 Photo: Gray explores the regions where she descended from on the 23andMe website.

Photo: Gray explores the regions where she descended from on the 23andMe website.

The gene that Gray was most interested in learning about was GJB2, which controls Nonsyndromic Hearing Loss and Deafness. Prior to the test, Gray was almost sure that she was deaf due to her genetics, but it was not proven. "I've always suspected that I was genetically deaf and this test confirmed it," she says.

In addition to learning more about the cause of her deafness, Gray was able to obtain her likeness for many genetic traits as well as genetic diseases. "They looked at certain genes in your genome, and looked to see if you might have a certain genetic disease. They also do traits, like if you are likely to have curly hair," Gray explains. She found out fun facts about her genetics such as sneezing when looking at the sun, or favoring salty snacks over sweet ones. "I'm more likely to have a photic sneeze reflex because of my DNA," she says.

Gray was ambivalent about looking at the results for her high risk genetic diseases, but decided it could only help her. "Whether or not I wanted to see my health risks was kind of a hard decision. I'm glad I did, because now I know what to expect. It only tells you if your risk is increased," she says.

For other Blazers, finding out which regions their ancestors descended from was the most enticing part of the test.

When her DNA came back and showed 49 percent African from the Bantu tribe, and 51 percent Indo European, she immediately wanted to delve further into each breakdown. "It broadened my perspective on who I am as a mixed person," she says.

The first surprising thing she found was that she was not pure Scottish, but was Irish as well. Even more startling was her small percentages of East Indian and Jewish ancestry. "We don't know anyone on either side of my family who is East Indian or an Ashkenazi Jew," she explains.

McIntosh went into the test hoping to get validation on the parts of her identity she was aware of, but ended up discovering new aspects of her origin. "I wanted to confirm what I knew, but I'm not just Scottish and Guyanese. I am more than that. It was a little jarring. My cultural identity was totally rocked. I wasn't upset, I was just surprised," McIntosh explains.

McIntosh has embraced the new parts of her identity. She regularly attends Jewish Culture Club, and attended an Indian dance celebration called Garba to learn more about the practices of her ancestors. Learning about her identity increased her awareness of diversity and culture. "Doing this test I realized I am a melting pot of all different races and cultures. It's interesting and crazy, where you come from," she says.

Freshman Raynel Carballo was anxious to see his results when they came back. "I don't like being wrong. I didn't want to be surprised and find out something like that I'm not European at all," he admits. Thankfully for Carballo, he turned out to be 53 percent European, but he was surprised to find out he was 27 percent Native American, seven percent African, and five percent West Asian.

Though this came as a surprise, it did not upset Carballo, but came more as an intrigue to new parts of his cultural identity. "I would like to travel to these places, get familiar with the culture and the people," Carballo says. 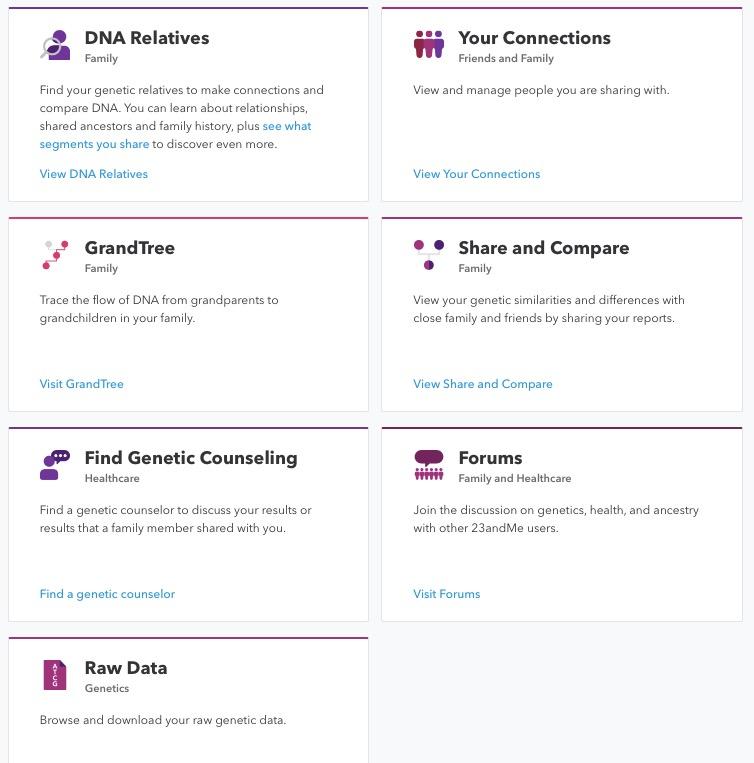 Photo: 23andme allows users to explore various parts of their identities based off of their genomes.

Photo: 23andme allows users to explore various parts of their identities based off of their genomes.

For Mason, the test results showed that her ancestors descended from regions she would have expected, but she was more Irish than she thought. Mason had already planned a trip to Ireland for fun, but after getting her ancestry results she wanted to know more details about her Irish heritage. "I wish I had more information about those parts of my family. I felt it was going to be even better because I would be in my 'homeland,'" Mason jokes.

The power of a vial of saliva to reveal information fascinates Mason. She is drawn in by the fact that DNA is such an essential part of life, yet has remained somewhat mysterious for so long. "It gives you a little bit of a glimpse. I am a science teacher, I geek out. Your DNA has so much information. Things we'll never know about ourselves, it knows. You can see over thousands of years where your people came from. It's a connecting power," she says.

Finding Family
Mason describes how AncestryDNA suggests possible family members. "It will say a possible range, and then it gives you a confidence level," she explained. Mason attempted to get in contact with people who could have been related to her. "I reached out to one person but I never heard back. I don't know if people are on there to check their messages," she says.

Gray was eager to learn not only about herself, but others as well. "You get to connect with other people who are on 23andMe. You don't get complete access; you have to get permission, but you can see what percent of your DNA you share," Gray explains.

Users can choose what information is to be shown to people who share DNA in common. "Some people don't give any name, some people it tells you a full name, and even health conditions you share or don't share," Gray explains.

Gray had a similar experience as Mason in reaching out to a possible family member through 23andMe. "There's a whole list of people who I share five or ten percent DNA with. I recently sent an email, but I haven't heard back," she says, unsatisfied.

Privacy comes into play not only in finding possible relatives, but also in a more general sense of a website containing a database of DNA.

Gray was initially worried about giving up access to her genome, but decided that it would most likely be for a good cause. "It is a little weird knowing that they have my genome, but they're using it for research," she acknowledges. Reassured by the steps taken by the site, Gray knew it was unlikely her results could be used against her. "The website claims that they always inform you about studies. You can opt for your genome to be included or not in research studies," she explains.

Privacy was the only thing holding Carballo back from immediately doing the test, and he is still not convinced that all of his DNA is fully private. "I didn't want to do it for [privacy] reasons. My mom was pretty sure it was going to be be fine though," he says.

Mason also brought up the concern of insurance companies gaining access to the genetic disease risks of a person. "It does open the propensity for health insurance companies to see that you had a higher likelihood for developing cancer which could be a concern," she discusses.

Results from DNA ancestry tests are enticing enough to outweigh the concerns for many Blazers. While the results do not always reveal factors that reshape identities, they instill in users a greater sense of confidence and a feeling of verification. Through the power of a vial of saliva, and the components of DNA, Blazers were able to uncover information that was not evident from the information to which they previously had access.