What's with all the hype surrounding the Maryland flag?

It's everywhere. It finds its way onto athletic wear, shorts, sweatshirts and hats. People are obsessed with it. Its presence is so constant that that the average Marylander doesn't even notice it anymore. What is it? It's the coolest state flag of all: the red and white cross and black and yellow checkers of Maryland.

The Maryland flag can be found just about everywhere imaginable, and for those who live in Maryland all it takes is a little bit of rooting around in the closet to find some flag-themed gear. This may seem normal to Marylanders, but very few other states are as obsessed with their flags. State pride is especially fierce in Maryland, and it's shown through the never-ending production of Maryland flag merchandise. But why exactly do Blazers buy into the Maryland brand? 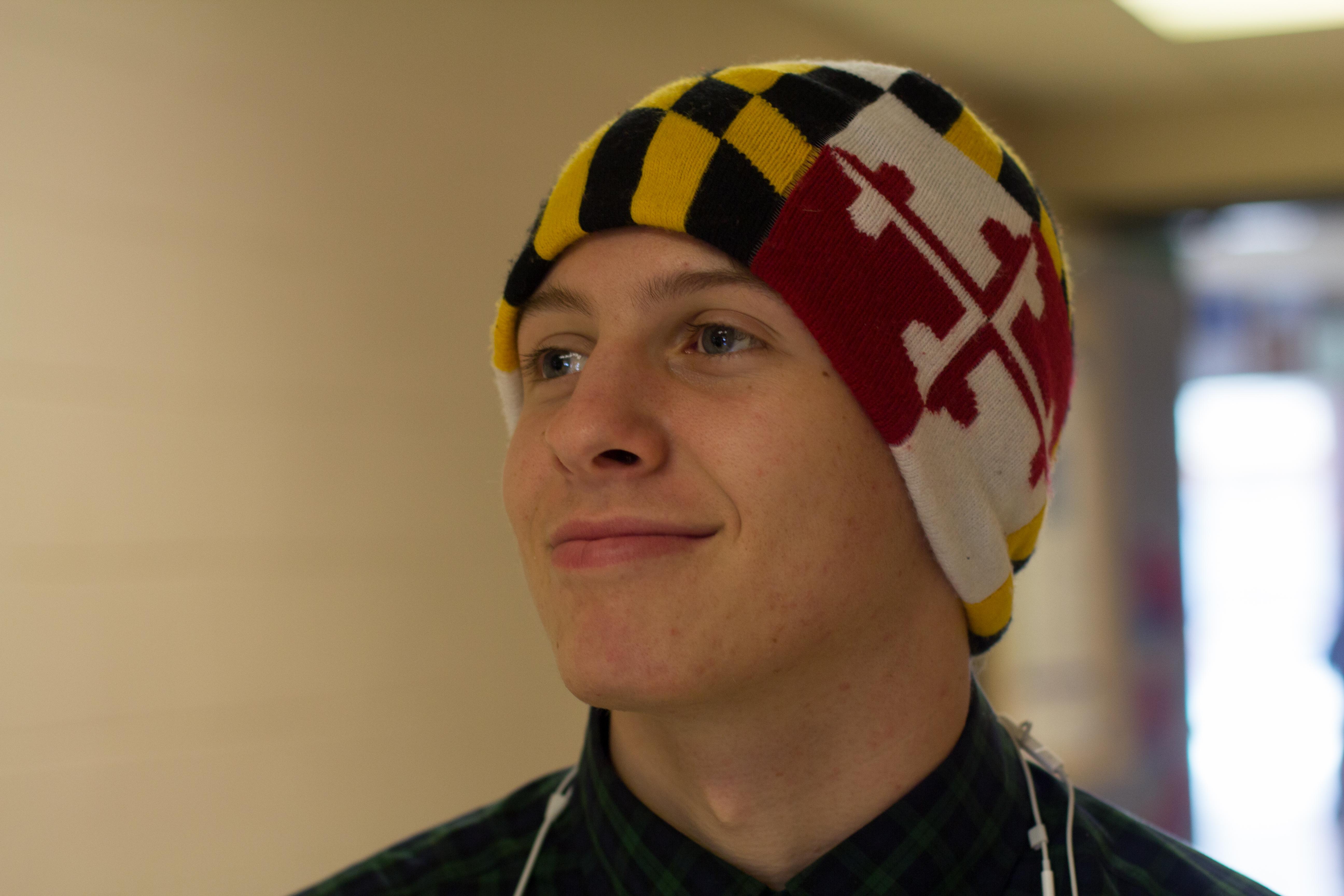 Dominic Massimino, Maryland flag enthusiast and Blair senior, explains that his passion for the flag stems largely from aesthetics. "I really like the way it looks," explains Massimino. "The four colors on it, black, yellow, red and white are kinda my favorite in that scheme together so I think it looks really cool." Freshman Daniel Griegg explains that his Maryland apparel also supports other aspects of his life. "My dad went to Maryland so I have a lot Maryland gear. This is a Rubik's cube jacket for cubers in the state of Maryland so that's representative of my state, I guess," he says, gesturing to his coat.

Maryland flag mania isn't just about looks. The flag has a unique history that explains the combination of the two designs. Prior to the Civil War Maryland didn't have an official flag. The black and yellow come from the family coat of arms of Leonard Calvert, father of the first Lord Baltimore. These colors were used to represent the state prior to the civil war. Lord Baltimore was an English politician and colonizer and the first baron of Baltimore. The coat of arms of his mother, Alicia Crossland, featured a red and white scheme. During the civil war the secessionist Marylanders needed a flag to distinguish themselves from the unionist Marylanders, so they chose the red and white Crossland banner. After the Civil War to show the two sides were united, the state put together the two banners to create the official Maryland flag of today. The mashup of the two flags symbolizes the unity throughout the state.

The strength of Maryland culture is especially prevalent in sports. Blair track and cross-country runner Thierry Siewe Yanga says that when he goes to out-of-state track meets, representing Maryland is a must. "First of all, we have one of the best flags in the whole USA," Yanga says passionately. "And also I love my state so I gotta rep everywhere I go, especially when I go to out-of-state meets like North Carolina, Florida, or California. All my clothes have Maryland or something on it, so I want people to know that I'm from Maryland." Both Massimino, who is also a student athlete, and Yanga own an abundance of Maryland athletic wear.

And then there's the popular #justMarylandthings hashtag on Twitter, which features things most Marylanders can relate to: excessive amounts of Old Bay on everything, crabs, the Mormon Temple that looks like Cinderella's castle and the constantly flip-flopping weather. Senior Tommy Norris thinks that these traits contribute to making Maryland the best state in the nation. "Well, first off, we have the best flag. It's undisputed. Maryland has the coolest flag ever. We also have jousting as our sport, the toughest sport ever, and also we have Old Bay. So Maryland is just the undisputed champ of the 50 states. There's really nothing to it," explains Norris with emphasis.

For freshman Nathalie Molina, the weather is a big contributor to her state pride. "In Maryland I like how we can experience all the temperatures," says Molina. Maryland experiences all four seasons, unlike states such as California and Florida which have pretty much the same weather year round. She's also a Maryland lover because its proximity to the nation's capital gives the state a more varied culture. Freshman Gabriella Velasquez especially enjoys Maryland's diversity. "It's a pretty diverse state if you think about it, we're really lucky to have so many different people," Velasquez explains.

For native Marylanders, chances are a lot of the stuff in this article sounds very familiar. To the few confused out-of-staters, this probably made no sense. Move to Maryland to understand. From the Eastern Shore to the West Virginia border, from the Mason-Dixon line to Maryland's southern border, Maryland is a state worth celebrating and sports the coolest flag in the nation. Also, Natty Bo is a big selling point. But not if you're under 21.