Stepping up the game

A look into the unique athletes at Blair

Sophomore Justin Haddad comes home on a Friday afternoon, packs his fencing gear, and hops on a plane to Portland for his next competition. Many Blazers may not be aware of the unique athletes at Blair who play sports that are not necessarily considered "common." Bringing to light unfamiliar sports to Blazers might encourage students to not just settle for sports that are the norm, but pursue something new and different

About once or twice a month, Haddad travels around the US to attend fencing tournaments. Haddad's interest started eight years ago while he was living in London. He decided to join a fencing club there, at first just interested in doing some sort of a sport. Now, fencing has become one of his biggest passions.

Haddad wanted to continue fencing largely because of his amazingly talented and experienced coach, Vladimir Meshkov. "The main reason I had to stick with fencing is that my coach was one of the best coaches in England. He was also the Olympic coach of 2012, and one of his assistant coaches even fenced at the Olympics," Haddad says.

What makes fencing especially unique in Haddad's eyes is that it requires more mental strength then it does physical. Although it requires physical strength to fight against the opponent, the best way to defeat them is strategically. "If you can outsmart your opponent you'll be able to do a lot better then if you are physically stronger than them. Usually the buff guy will be really slow, but maybe the less athletic but smarter guy is going to be able to win," Haddad says.

Haddad is extremely dedicated to the sport and goes to practice every day at the DC Fencers Club. His diligent training paid off. In the Cadet World Cup, an international fencing competition for juniors, he placed in the top eight. After one of Haddad's friends got accepted into Notre Dame with a fencing scholarship, he knew he had to pursue fencing beyond high school and keep working to his academic and athletic aspirations.

Junior Deeya Garg has been in gymnastics for about ten years, training vigorously everyday and practicing up to 20 hours a week. She put her blood, sweat and tears into gymnastics. But three years ago, she decided she needed a change. She wanted to pursue another sport that would challenge her in ways she was never challenged before. "Of course I still miss gymnastics but I wasn't at the point where I wanted to go into the Olympics or something, and it took so much of my time," Garg says. 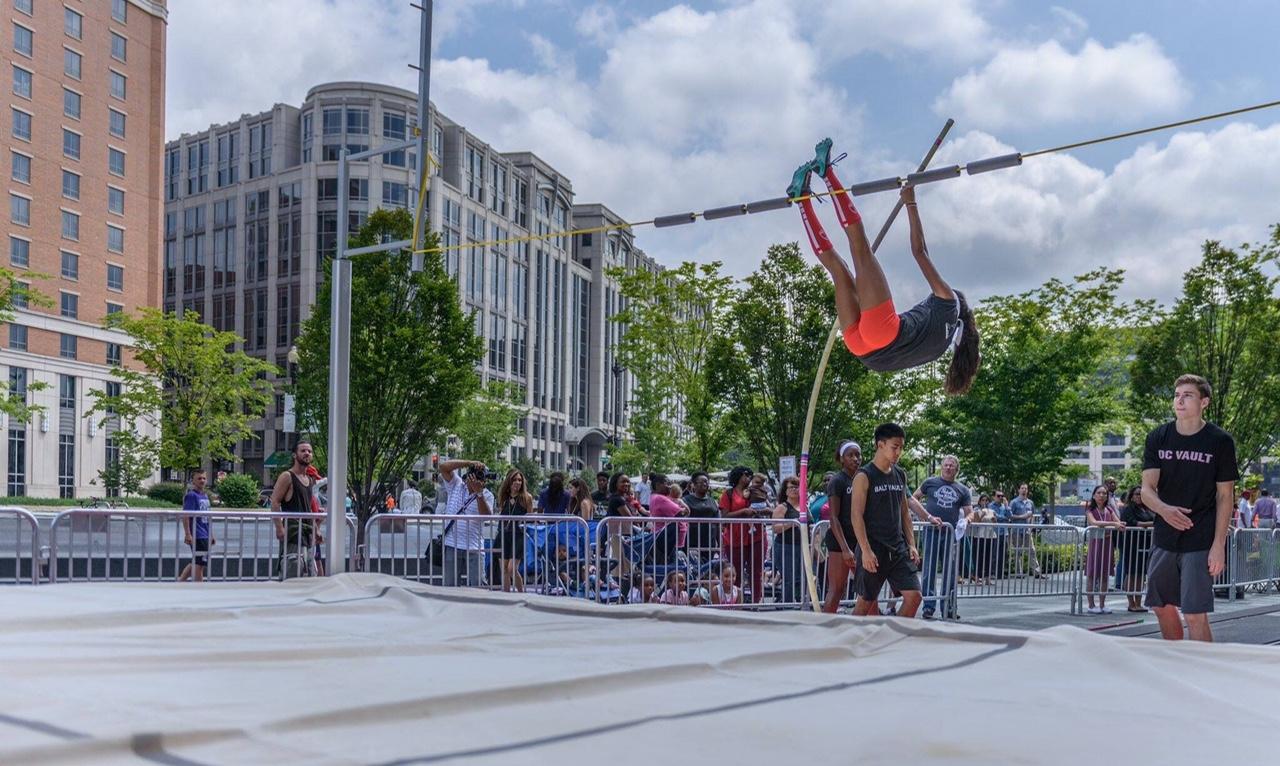 Photo: Garg pushes herself over the vault at a DC Vault competition.

Photo: Garg pushes herself over the vault at a DC Vault competition.

Garg soon thought of the perfect sport that would incorporate gymnastics and push her to try something more unique: pole-vaulting. She joined DC Vault, a premiere pole vault club that provides year round training from beginners to elite-level athletes. Edward Luthy, Garg's coach, has instructed Garg from the beginning and has significantly impacted her athletic training. Garg was really worried in the beginning, knowing how hard it would be to pole vault despite being short. "Most pole vaulters are a lot taller than I am so even though being short is beneficial for gymnastics, it gives me a huge disadvantage for pole vault," Garg says.

Although Garg admits that she is a fairly competitive person, she particularly likes that pole vault is more of an individual sport because everyone jumps to their personal highest potential. "As a team we're all very close but we are also really pushing each other to clear more heights. Every time I'm watching my friend I'll be cheering for her, but of course there's a voice in my head that's like, 'I want to try to beat her best height.' But in reality, it's always individual to the person, so it's really you competing against yourself," Garg says.

What Garg loves most about the sport is that it uses aspects of her training she started as a little girl. "It all takes me back to my roots because everything in my life goes back to gymnastics. I took up diving and pole vault, all from the gymnastics: the strength, the agility, the flexibility and just flying through the air," Garg explains. Despite Garg's love for these sports, she is also interested in going to medical school in the future. She is unsure if she will be able to pursue pole vaulting in college, but hopes to continue training in high school to reach her fullest potential.

Junior Stevie Shumaker was never a huge fan of sports herself, and was struggling to find an extracurricular activity she could do just to have fun. Towards the end of last year, she was in BNC working on the next Infoflow episode, entering a pac for the rock climbing club. "I was entering it into the computer one day and was like 'wow, that might actually be something I want to do,'" Shumaker says. She showed up to the club one day after school, but there were only about three other people who came. Regardless, she wanted to stick with it, and has not regretted it since. 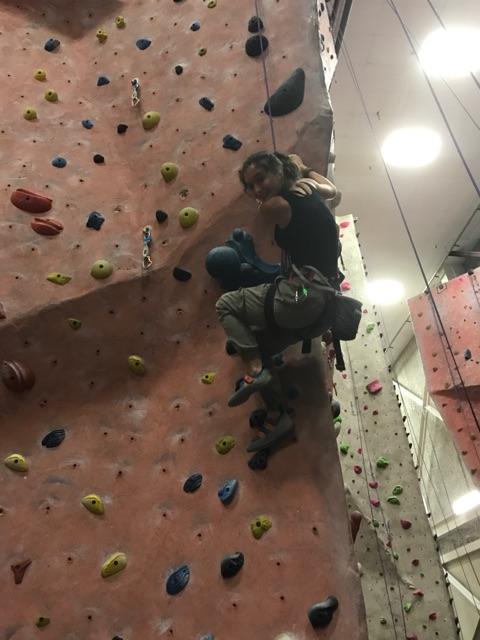 Photo: Shumaker visits the rock climbing complex as often as she can, always wanting to improve her skills.

Photo: Shumaker visits the rock climbing complex as often as she can, always wanting to improve her skills.

Starting out with rock climbing wasn't too difficult for Shumaker at first, as she loved climbing as a kid, and didn't really need any sort of training to get started. "It is pretty self taught, and as a kid I always climbed trees a lot anyways. My uncle worked at Green Peace, so I got to climb in the training warehouses there, and then soon enough I started at Blair," she explains. There's not a large teaching aspect to the sport, but there are a few things that some of the experienced members in the club helped her with to advance her skills. "There are some things that you need to know that have been taught to me by the group as a whole, like how to angle yourself, and how to push with your legs instead of pulling with your arms," Shumaker says.

But Shumaker ran into a couple obstacles along the way. One of Shumaker's biggest struggles was letting loose, getting over her fear of letting go of the rocks. "You had to let go of the rocks and hold on to the rope to get lowered down, and I was always really scared to trust that I wouldn't fall, especially when it's at an incline and you have to swing out," she states. But, after becoming more familiar with the the basics of rock climbing, Shumaker began travelling to Earth Treks with the Blair club just about every week and fell in love with the sport. Although it is more of an after school sport she probably will not pursue in the future, that is what Shumaker enjoys about rock climbing. Not being much of a competitive person, Shumaker does rock climbing to improve a skill that she not only enjoys but also excels at. "I'm not a super competitive person and I've never been into sports, but it's a fun activity and I enjoy it, I think that's all that matters," Shumaker says.

Regardless of whether it's for the eagerness to try something new, the sake of competition, or even just a sense of enjoyment, some Blazers choose to take a different path with their athletic ability, determined to stand out from a crowd. And with over 3,000 kids at Blair, there are sure to be several other unique athletes who may play sports that are less familiar or recognized among the Blair community. Whether it be be pole vault, fencing, rock climbing or hundreds of other sports, sometimes the most unexpected sports will be just the right fit.