Documentaries are usually for informing only, but "Tarnation" goes beyond the simple genre to create an incredible work of true-life-cinema. Jonathon Caouette's innovative filmmaking debut, "Tarnation" makes sorrowful tales of family and life as entrancing as they are poignant.

"Tarnation" tells Caouette's heartbreaking but enlightening story, which details his life from the age of 11 as well as his complex relationship with his disturbed mother, Renee. The film opens on a frightening and gloomy moment; Caouette receives notice that Renee is in the hospital after overdosing on Lithium. 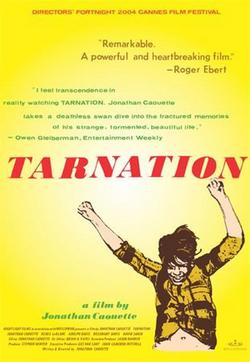 Photo:
Upon hearing this unfortunate news, Caouette decides to return to his hometown in Texas to be at his mother's side. "Tarnation" then gives a glimpse into his mother's tragic childhood, when she was repeatedly admitted into insane asylums. This overtone of sadness is present throughout a majority of the rest of the film.

Caouette's past is just as depressing as his mother's at times. Caouette uses haunting footage to show the personal struggles he endures. Amongst the most powerful segments are Caouette's monologues as fictional characters, voice recordings of him expressing his resentment at not being able to live with his mother and a segment in which Caouette realizes that he is homosexual. He is petrified of how others will respond to his sexuality.

Although his childhood is filled with sorrow, Caouette also shows the strong spirit he uses to overcome adversities. "Tarnation" cleverly splices in footage of Caouette's creative endeavors, such as his early Super-8 films, as well as scenes from a musical version of David Lynch's "Blue Velvet," which he directs in high school.

Astonishingly, Caouette put this collage of old footage together using only the Macintosh software iMovie. Caouette takes full advantage of the simple computer program. Such effects as fast motion transition, coloration changes on photographs and split footage are so surreal that it makes "Tarnation" seem like a cross between a Salvador Dali and Andy Warhol painting in motion.

The narrative style of "Tarnation" is also unique. Instead of simply recording a voice over or featuring interviews with involved parties, Caouette lets the images speak for themselves. In addition to the vast mix of video recordings, words occasionally appear on screen as captions to the film's content. "Tarnation" covers a great deal of Caouette's complex life, but the film is so fluidly edited and organized that it is easy to watch and comprehend.

The film does even more than detail Caouette's life. "Tarnation" also has clips of popular shows and pop-culture icons mixed in to make the film not only a fascinating portrait of Caouette himself but also an interesting glimpse of the society in which he grows up.

Music furthers the emotive aura of "Tarnation." The film's varied soundtrack captures the many sentiments expressed throughout "Tarnation." One acoustic guitar track, in particular, laid over various scenes containing photos of Caouette with his mother produces some of the most moving moments.

"Tarnation" artfully displays a tale of coming of age under harsh circumstances, finding one's one niche and the bond of love in family, making it a groundbreaking, fascinating portrayal of the hardships and glory in one extraordinary life.

"Tarnation" (88 minutes) is unrated but contains crude language, brief nudity and reference to mature themes, including rape and physical abuse. It is now playing at the Landmark E Street Cinema.