The Blazers’ relentless offense led to a blowout victory against the Gladiators, 45-0 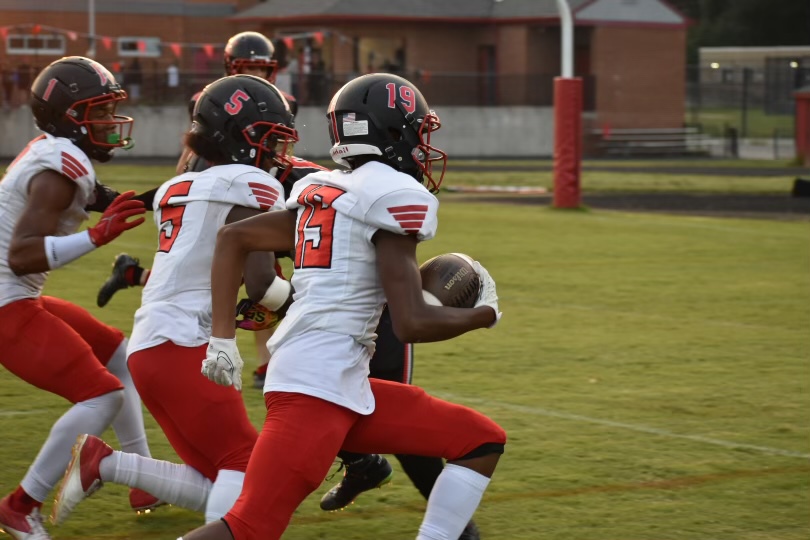 Photo: The "Battle of the Boulevard" was no contest at all, with the Blazers beating Northwood 45-0.

Photo: The "Battle of the Boulevard" was no contest at all, with the Blazers beating Northwood 45-0. Photo courtesy of Jose Ortellado.

“The Battle of the Boulevard” this year was not merely a battle, but instead a total domination of the Blazers (3-0) over the Gladiators (0-2). On Sept. 16, Northwood gave their all in a match-up against Blair, however their efforts were to no avail as Blair juked, sprinted and scored repeatedly.

Northwood began with possession, but after the Blazers quickly shut down their first four downs, the Gladiators saw a sneak peak of what was yet to come. The first offensive play for Blair began with senior running back Kameron Reynolds returning the kickoff for 20 yards. Shortly after, it was announced that these yards were not counted due to a flag, a problem that Blair encountered numerously throughout the game.

A few minutes into the quarter, senior quarterback Kendell Anderson saw a gap in Northwood’s defensive line and decisively ran towards the end zone. En route to scoring, Anderson gracefully spun around not only one, but two dazed defenders and stormed down the left-side of the field to the end zone. Unfortunately, this touchdown was called back due to another penalty called during the play.

The first 10 minutes of the game were uneventful when it came to scoring. Multiple flags thrown prevented Blair from advancing far, but that changed in the last 1:30 of the first quarter. Right after the snap, Northwood’s defense swarmed Anderson in the pocket, but after a few seconds, he emerged from the chaos with a spin move around a Gladiator defender and fired a 33 yard touchdown pass to junior wide receiver Mikhail Seiken. Blair was unable to score the extra point, ending the opening quarter 6-0.

Blair picked up right where they ended the first quarter, with Seiken taking a Northwood punt return for 40 yards. The next few plays for the Blazers consisted of Anderson making quick, successful passes to senior wide receiver Aven Williams to inch Blair closer to the endzone. Eventually, after dodging two incoming Northwood defenders, Anderson threw a 21 yard touchdown pass to Williams. Blair then ran a two-point conversion, sending senior running back Tariq Taylor through a crowd of the Gladiators’ defense. Taylor victoriously reached the endzone, bringing the score to 14-0 with four minutes before halftime. 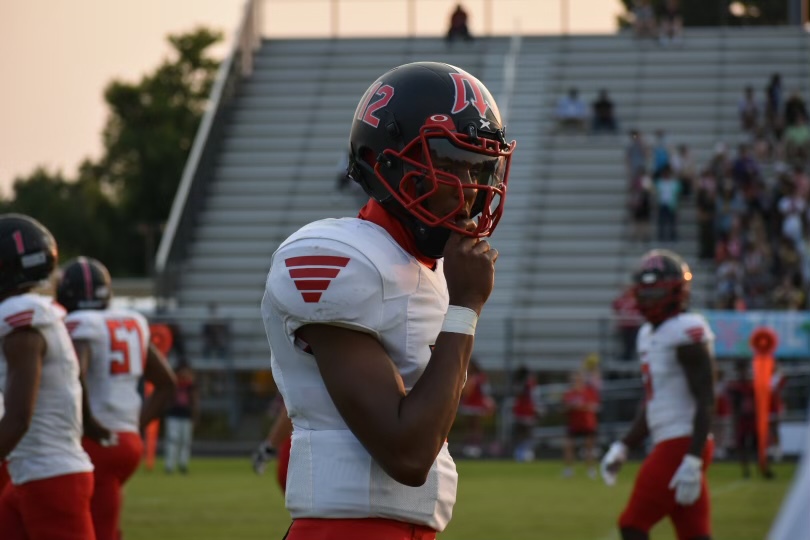 Photo: Senior quarterback Kendell Anderson regroups in preparation for the next play.

With limited time left in the quarter, not many foresaw Blair scoring again. However, less than two minutes later, Seiken intercepted a pass on defense and ran 30 yards for a touchdown, causing the Blair fan base at Northwood to go berserk. Another two-point conversion from Tariq ended the quarter 22-0.

Looking at the first half of the game, Blair head coach Samuel Nosoff reflected that he wanted the team to reduce the number of penalties they received. “I mean we got 2, 3 touchdowns called back for penalties [and] a couple of drives. You know, when we play a better team, getting a penalty like that is going to kill the whole momentum of the game.”

Despite a penalty-heavy first half, the Blazers began the second half with a clear purpose: finish them off. Immediately after an unfortunate turn of events where senior wide receiver Jamall Worell’s 90 yard kick return was called back, Reynolds ran the ball 80 yards to the end zone and the Blazers converted for two more points. With a score of 30-0 just 40 seconds into the second half, all that could be seen of Blair’s tropical-themed student section were countless leis flying in celebration.

The Gladiators’ futile attempts to score after this were met by the Blazers’ suffocating defense. In this entire offensive Gladiator possession, they were not able to advance a single yard without being pushed back by the Blazer barricade. Senior middle linebacker Tariq Taylor viciously tackled Northwood’s wide receiver, which was followed immediately by the Gladiators losing yardage and a chant of “hit the weight room!” breaking out. 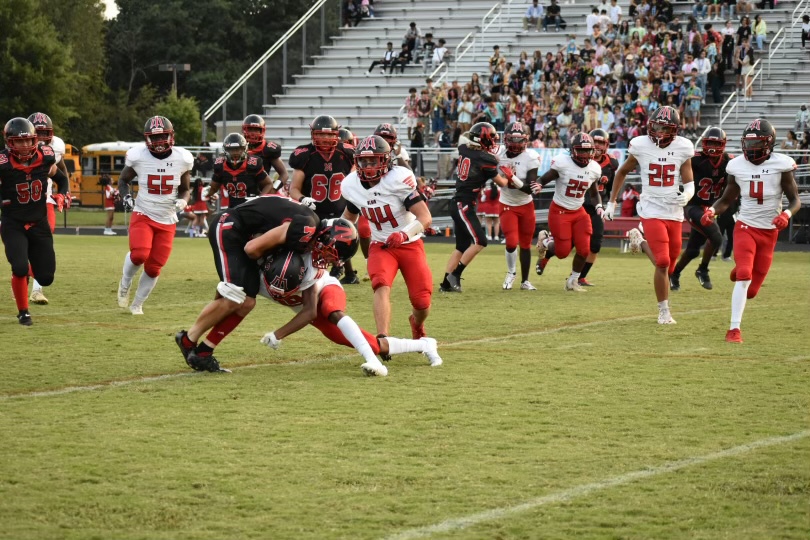 Following this lackluster offensive show by the Gladiators, the Blazers showed why they are the beast of the boulevard. But deceitful maneuvers and ankle-breaking moves from Williams got him right where he needed to be: the end zone, and Blair racked up another touchdown. Their 2 point conversion was once again successful and with 5:40 left in the third quarter, the Blazers were up 38-0.

Unfortunately for the Gladiators, the defensive unit for the Blazers grabbed the Gladiators’ running back, spun him around, and threw him to the ground at the 15 yard line just after their kick return. The Gladiators were forced to punt after again failing to advance down the field. The third quarter ended with Blair in the lead, 38-0.

In between quarters, the entertainment continued. Two fans sprinted across the entire field; one in a yellow banana suit, the other in just a ski mask and pajama bottoms. 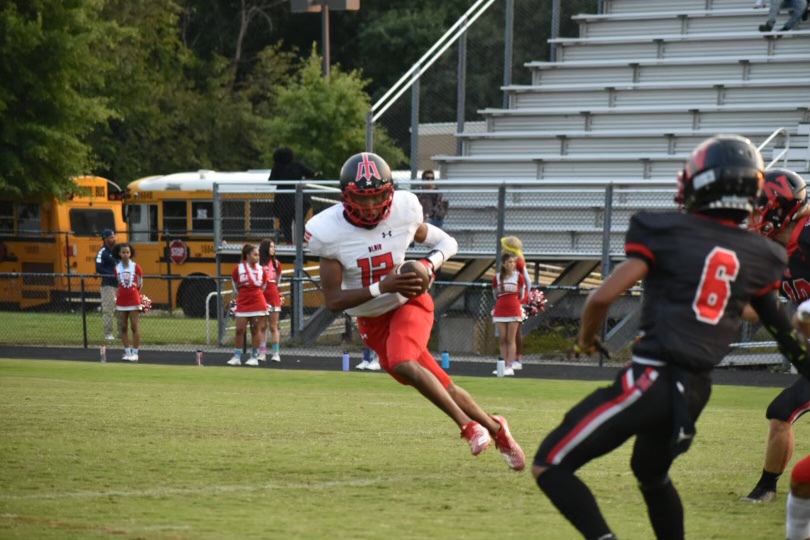 Anderson did not join the Blazers’ offense at the start of the fourth. Instead, he was replaced by junior quarterback Quinn Stofa, who had a highlight play of his own. A seemingly relinquished Gladiators team made little effort to stop Stofa from tearing into the endzone for another rushing touchdown. With a successful extra point, the Blazer lead was raised to 45-0. To add insult to injury, the Northwood team fumbled and barely recovered an easy kick return opportunity just before the final game buzzer.

After the game, Seiken explained how Blair came in with the intention of dominating, which is exactly what they did. “I think the game went well. I think we executed well. You know, It was just one of those games [where] we came in [and] we wanted to dominate.”

Blair will take on Paint Branch, one of the top teams in the county, on Friday Sep. 23. Tickets can be found here.