The end of an era (again)

And so it begins. After Joe Gibbs, Redskins head coach and president of football operations announced his retirement Tuesday morning citing family reasons and the stressful toll that Sean Taylor's death has had on him, the same question flickered across everyone's mind. "Who's next?"

The constant ebb and flow of management through Redskins Park is nothing unfamiliar to fans and players alike. Gibbs' successor will be owner Dan Snyder's sixth coaching hire since he purchased the team in 1999. And with the god of Redskins lore stepping down after a mediocre 31-36 stint that featured only two brief playoff runs in four seasons, it's hard not to wonder if this organization can be resurrected at all. 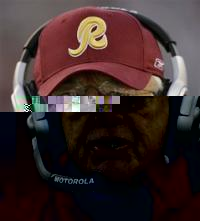 While every position on the field – quarterback to the kicker to the coaching staff – has been revamped from disappointing season to disappointing season, the only aspect of the organization that has not undergone change is the front office. Logical reason says that the problem has never been the quarterback or the kicker or the coaching staff, but Snyder and his faulty all too hands-on management ideology.

After Gibbs' first run in D.C. ended in 1992, the team lost all direction and fell into a Dark Age of football. In hopes of reviving his boyhood team, Snyder bought the franchise in 1999, but alas the result has been nothing close to a Renaissance.

First on the laundry list of coaches was Norv Turner. After a strong start in Dallas, Turner's seven seasons in Washington were nowhere as remarkable, and he finished his D.C. career 49-59-1. During his tenure, Turner acquired heralded stars in WR Michael Westbrook (1995), CB Champ Bailey (1999) and LB LaVar Arrington (2000) – all of whom have moved on to greener pastures – yet only made one playoff appearance.

Marty Schottenheimer, who relieved interim coach Terry Robiskie in 2001, stayed only one season in D.C., just long enough to post a .500 season and still get the boot in favor of University of Florida hotshot Steve Spurrier and his fun-and-gun offense.

But the only one who had fun during Spurrier's bumbling two-year stay may have been the coach himself, who signed a $25 million contract for the job, the most of any coach in the league. Fans on the other hand had to suffer headaches disguised as football games riddled with penalties and a new quarterback for every snap.

After three expensive busts, Washington fans grew antsy. So when sports radio and news outlets buzzed with reports that Gibbs, like a knight in shining armor was returning to rescue the team from its habit of self-destruction, Redskins everywhere were jubilant.

No one thought that maybe the aging coach would be a little rusty, unfamiliar with the NFL under the salary cap or would overlook double timeout rules. No one anticipated that Gibbs' four seasons would be nothing less than mediocre, though they included two of the team's three playoff runs in the last fifteen years. No one would have guessed that personnel fumbles right from the start – beginning with a quarterback controversy between raw youngster Patrick Ramsey and battered and bruised veteran Mark Brunell – would eat up even more of the Skins' bank account for no justifiable reason.

While Gibbs has agreed to stay on as Snyder's special advisor, he is already cleaning out his office in Redskins Park to get out of the way of his successor, most likely the current defensive coordinator Gregg Williams. But, if Williams' prior 17-31 head coaching track record is any indicator, the dust may not be settled on another woulda-coulda-shoulda season before Snyder starts browsing more résumés.

It may be his youth, impatience, blind love for the team or perhaps even a psychotic need to sign away obscene amounts of money, but Snyder's actions in acquisitions of coaches and players have cost this team more than any one will ever know. Only time will tell of Gibbs' compassionate tutelage or the heartbreaking loss of Sean Taylor has done anything to temper his rash decisions. Eight years and millions of dollars later, Redskins faithful are tired of being carted around like orphans from foster home to foster home. Snyder needs to make a franchise decision for a franchise coach and give fans the stability that is long past due.