Do not be mistaken, though, as the show is not at all your average National Geographic documentary on tigers, but a harrowing exploration of the dark world of zookeeping and the eccentric and arguably immoral rulers behind it all. 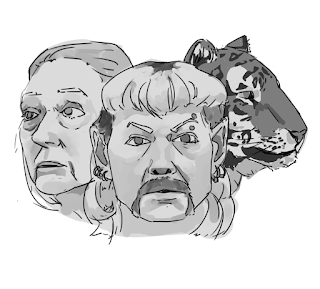 The show follows the show’s eponymous figure, Joseph “Joe Exotic” Maldonado-Passage, and his motley crew of zookeepers as he struggles to maintain his Oklahoma zoo of over 200 tigers and other big cats. Conflicts arise not only from within but from outside forces as Exotic grapples with animal rights activist Carole Baskin and her attempts to shut down his zoo.

In the first few episodes, Exotic is admittedly compelling as many viewers find themselves strangely enthralled by his emblematic mullet, marriages with multiple men, self-produced country music videos—the list goes on and on. Whether Exotic is a real person or an ungodly parody of Steve Irwin becomes almost indiscernible.

However, beneath the animal-printed facade lies an unstable man who has clearly drifted from his original mission of rescuing big cats from the wild. Exotic may very well be the living embodiment of ‘You either die a hero or you live long enough to see yourself become a villain.’

Incident after incident, Exotic falls into a web of trouble as he desperately tries to maintain his reputation. As Joe Exotic and Carole Baskin viciously go back and forth with slanderous online videos from Joe’s end and a slew of lawsuits from Carole’s, their tit-for-tat conflict seemingly never-ends. Exotic even goes so far as to hire a hitman to take out Carole Baskin and, as a result, the series climaxes with his sentencing to 22 years in prison on two counts of murder for hire and 17 federal charges of animal abuse.

While Joe Exotic may seem like the main miscreant, it is difficult to root for anyone. Really, the only enjoyable personalities were the other zookeepers at Joe’s zoo and Mario Tabraue—the man who allegedly inspired Tony Montana in the iconic 1983 film “Scarface.” It is shocking yet ironic that the man who inspired one of the most vicious characters ever in cinema is seen as an angel compared to the documentary’s focal figures.

Ethics and morality are virtually nowhere to be found. Carole Baskin, the hippy-dippy animal rights activist working against Exotic is just as cruel, with animals confined in wire cages and volunteers working for extended periods, earning no money whatsoever. And all that does not even come close to the full scope of her controversy.

One of the main discussions the show has produced is whether Carole Baskin murdered her husband, Don Lewis. The documentary focuses on Baskin and Lewis’s mysterious past relationship, honing in on Lewis’s puzzling disappearance. Although the twenty-year case remains open today, the documentary has essentially made up its mind on the matter: Carole Baskin was definitely involved in murdering her husband.

But while Carole Baskin murdering her husband may seem like the most entertaining and memeworthy explanation of his disappearance, the show provides little factual evidence to support its suspicions, merely opting to show gossip from the other characters and denial from Carole and her current husband.

This is one of the show’s main pitfalls: It sacrifices any sense of veracity for crafting an insane yet captivating narrative. As true as its events may be, viewers should choose to take the show with a grain of salt, though there is no denying that it is an absolute spectacle that is nearly impossible to not binge-watch for seven hours straight.

Tiger King also proves to be as deeply compelling as it is disturbing and insensitive. Even though the documentary’s purpose is to detail the incidents leading up to Exotic’s conviction, at times it is unclear as to why certain events are emphasized and others are not.

The show glosses over serious matters such as 23-year-old Travis Maldonado’s suicide, and instead chooses to focus on Exotic’s pompous gubernatorial campaign just a few episodes later. It is altogether hilarious but horrific, leaving viewers with a sour taste in their mouth after learning of all the atrocities mentioned in the show.

There is obviously much more to be discussed beyond what Tiger King is able to compress in seven short episodes. Analyzing moments such as Doc Antle’s unsettling harem of female zookeepers, Jeff Lowe’s shady business deals, and even that glorious shot of James Garretson jet riding into the sunset can produce hours of discussion.

But for all that it is, Tiger King is a wild ride from start to finish. Five years of production and a storyline spanning almost two decades culminates into a highly contentious yet engaging look at a disturbing, fascinating subculture.