The fast lane and the slow lane; Netflix versus Hulu; ordering takeout Pizza; modern air travel. All of these have been used as analogies to describe the complex topic of net neutrality, or the open internet. Net Neutrality encompasses a large number of issues such as internet speed, prioritization of some companies over others due to business agreement and ownership and a bundled one-fee plan in comparison to paying for each type of internet content separately. But, in short, what net neutrality really ensures is that our internet service providers (ISP) treat all content on the internet equally.

Ajit Pai, Chairman of the Federal Communications Commission (FCC), announced his plans to end net neutrality on Nov. 21. The proposed repeal of the FCC's 2015 vote to classify broadband internet service as a utility would allow ISPs to prioritize certain content on the internet over other content. This could potentially result in higher costs from consumers as well as websites, or slow down the speed of unfavored internet content. 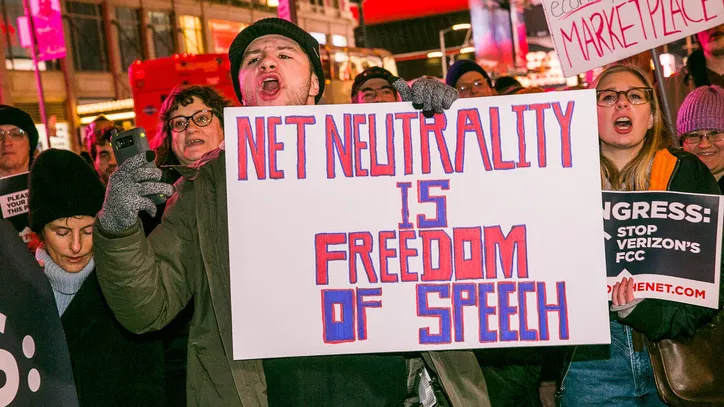 Photo: Protesters gathered at Verizon stores on Dec. 7, 2017 to support Net Neutrality prior to the FCC vote.

Photo: Protesters gathered at Verizon stores on Dec. 7, 2017 to support Net Neutrality prior to the FCC vote.  Photo courtesy of Sarah Tew/CET.

Some scenarios indicate that consumers may have to buy plans from more than one ISP to gain access to all their preferred internet content. Others suggest that higher costs would be required from either consumers or web sites, to load unprioritized content at faster, more acceptable speeds.

Net neutrality serves as an equalizer, giving people access to the same content regardless of provider. Not only does this mean that one person's 'internet' is not different than another person's, but also that a smaller, startup website can be accessed just as easily as the website of a well known company regardless of provider.

The FCC states in its proposalthat a key reason to repeal net neutrality is to promote the free market in internet exchange in accordance with the Telecommunications Act of 1996 created in the Clinton administration. They hope to increase competition among providers, in order to increase ISP revenue.

However, repealing it will diminish the economic opportunity of thousands of small businesses who will have to pay more to be represented equally and have their content delivered at the same speeds as larger corporations who can afford to pay higher fees. The only competitors it would help would be big-business ISPs seeking out greater fortunes, who could then charge more from consumers and clients.

Though revocation of net neutrality would favor large corporations, many of them are coming out in favor of keeping net neutrality. Google, for instance, has created a page on which they encourage readers to take action to preserve the open internet, and share their perspective. Among some of their main points they state, "Our values remain the same: the internet should remain competitive and open."

For Blazers, the threat that their most used internet services may not be available, or have slower speeds and increased costs are major concerns.

Junior Michael Damtey worries that repealing net neutrality would be too limiting. "They are taking over. They are basically controlling what you can and can't do on your own devices," Damtey said.

Considering our current dependence on technology, net neutrality must be preserved to ensure equality for all. Limiting access to the internet as well as manipulating content to force users to pay extra for certain services discredits the intent of the internet: to be a database for people to search and share freely with few restrictions.