A great turnout to apple turnovers.

Like many popular dishes, there are a wide variety of recipes online, and it can be difficult to decide which method will yield the best results. My goal was to find the best apple turnover recipe, so I followed three recipes and Blair students compared them to find the best.

I baked all of the apple turnovers on the same day, following each recipe exactly. All three were relatively easy to make, each only taking about an hour to make with store bought puff pastry. With the homemade puff pastry, a few extra hours are needed for the rolling and chilling.

For all of the apple turnovers, I used the same quick puff pastry recipe from Claire Saffitz's baking book, Dessert Person. All three apple turnover recipes call for prepackaged frozen puff pastry, but wanting to give every recipe the best chance, I decided on making a homemade puff pastry.

Overall, this puff pastry was amazing! The large amount of butter made it delightfully rich and creamy, and the pastry was nice and crispy. There was a clear separation of the layers, and it melted in the mouth, creating a perfect experience. If you are ever in need of a puff pastry recipe beyond apple turnovers, I strongly recommend this one. All danishes, palmiers, toaster strudels will be drastically elevated with this homemade puff pastry.

The intense tartness from the Granny Smith created a slight sour taste, which Blair taste testers quickly pointed out. On the other hand, the Fuji apple had the perfect balance of sweetness and tartness, which led to a delicious apple turnover.

Not only did the type of apple create a difference, but the cut of an apple also impacted the texture and how easy it was to fill the pastry. The sliced apple created a crunchier texture, but it made the pastry relatively difficult to fill. This forced me to put in less apples to ensure the turnovers closed, since the slices kept sliding out.

One apple slice made the difference between overfilling and under-filling the turnover, thus making it difficult to have a good ratio of apple to pastry. However, the cubed apples were softer and made it easy to pack into the pastry. They stayed more in place and didn't slide out. 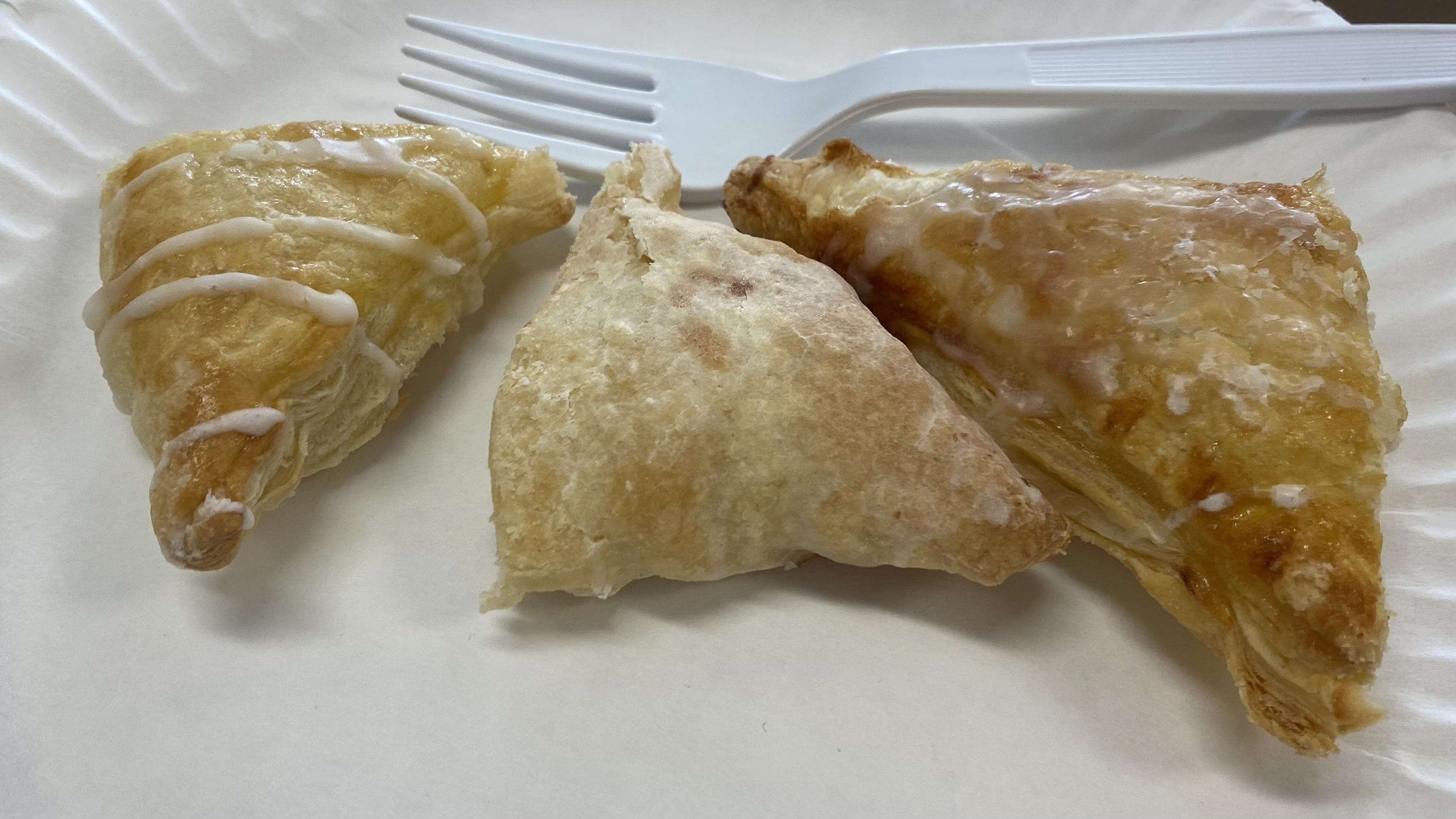 I followed this recipe from Natasha's Kitchen, using the Granny Smith apples, which were cut into ⅓" cubes. Regarding flavor, the spices and the amount of cinnamon perfectly enhanced the apple. "The spices definitely add to the apple flavor," sophomore Nicholas Bourg said.

Additionally, there is a small amount of caramel syrup from the sugar combined with the apples' juice, creating a gooey inside. However, the softness and gooeyness is not only from the syrup, but also the apple itself.

The biggest complaint about this recipe is the softness of the apple. "I like [the apples] crispier than this. It's super soft," sophomore Grace Humbert said. The apples were so soft to the point of being mushy, almost like applesauce.

For this recipe by Allrecipes, I followed their recommendation and used Granny Smith apples. This recipe definitely was an improvement compared to the first one in terms of texture. The sliced apples allowed for a small crunch in the apple in the apple turnover as opposed to a mushier texture. "I do like the texture of [the slices] better than the chunks. I think it has more bite to it, more mouth feel," junior Christy Li said.

In terms of flavor, the spices aren't strong enough. The apples don't have the warmth and tart taste of the nutmeg and cinnamon. "There's not as much cinnamon as the other one — detracts a little bit," sophomore Julian Ekernas said. This can easily be solved with a quick fix of an additional ½ tsp of cinnamon, and for even more seasoning, a ½ teaspoon of nutmeg.

My personal complaint was about the icing. One cup of powdered sugar was called for, when in reality only about ⅛ of the icing was actually used. It truly was a waste of valuable sugar, which could've been used for other treats.

The recipe should change the amount of the ingredients needed for the icing to ⅛ cup of powdered sugar, ⅛ tablespoon of milk and ¼ teaspoon of vanilla extract. Besides, even with the reduction, there will still be plenty of icing.

The clear winner of Sweet Scoop episode two was this recipe by Preppy Kitchen. "I could have apple turnovers like this every day" sophomore Alex Risso said.

The extra sprinkle of sugar on top of the pastry really placed this recipe over the edge. The sugar on top perfectly caramelized, creating an amazing texture on the pastry. The fuji apples had amazing flavor and the cook time in this recipe softened the apples just enough.

With everything combined, this recipe was undoubtedly the winner among the three recipes. "There's nice and soft apples, it's crispy, it's a little flaky, it's everything I want in a pastry." Ekernas said. With this Preppy Kitchen recipe, I wouldn't change a thing.

Celine Wu. Hi everyone! My name is Celine, and I am a junior staff writer. I play volleyball for high school and MetroVBC. In my free time, I solve logic puzzles and play with my two fat cats. I also bake cakes for profit; my most popular … More »