I hope I didn't macaron choice with these recipes!

Macarons are one of the most prized, delicate French desserts. Only made with a few ingredients, macaron shells have a crispy outside and a fluffy inside accompanied by a hint of sweetness. There are a variety of macaron flavors, ranging from chocolate to pistachio to mango.

The classic macaron flavor is vanilla, but I prefer fruit macarons, so I followed a lemon and a raspberry recipe to see how they compare to the classic. 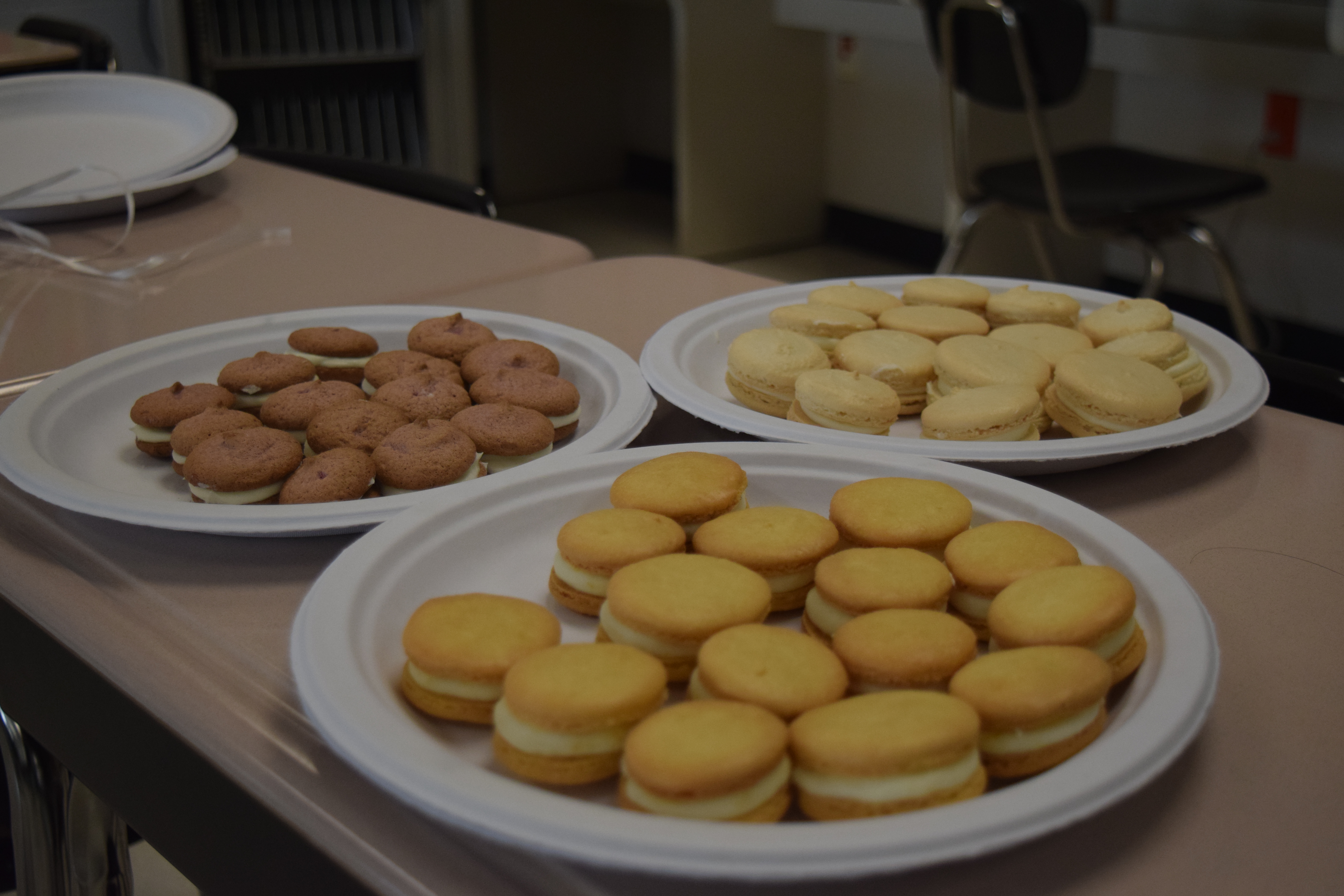 Photo: The three macaron recipes from left to right, raspberry, lemon and vanilla.

I followed this recipe from Ahead of Thyme. It only requires seven relatively common household ingredients. The comprehensible and clear directions make the intricate process a little bit easier.

Altogether, I was delighted by the results of the macaron shells. Senior Aiesha Chaudhry describes the texture as a fluffy inside and a crisp shell. "This is like the kind of texture that I like. It's crispy on the outside and chewy on the inside," Chaudhry said.

The key aspect of a macaron is the feet, small bubbles at the base of the shell which indicate whether a macaron is properly made. In this macaron, the feet were nice and tall, and the texture was perfect. When repeating the recipe for the second set of shells, the texture was still spot on.

The main issue with this macaron was the frosting inside. To make a smooth and creamy buttercream frosting, there needs to be a lot of butter and powdered sugar. This combination inevitably creates a filling that is too sweet. There needs to be another flavor to counteract the sweetness in the frosting, such as acidity from lemon or an addition of salt to the buttercream. The lack of this in this recipe led to an overpowering sweetness.

This House of Nash Eats recipe requires a few more steps as opposed to the classic recipe because of the raspberry flavor. In addition to the vanilla buttercream filling, there is a raspberry jam in the center.

The texture of the macaron was also a bit off. I grounded the freeze-dried raspberries and even sifted them, but the raspberries made the shell too heavy, so it didn't rise properly. Several components of the shell were incorrect — there weren't any feet, and the shell was lumpy, with the raspberry chunks clearly visible. "The macaron shell texture was kind of not correct," senior Jocelyn Hao said.

Even though the raspberry added a nice flavor to the shell, it completely ruined the texture, so I recommend using the classic vanilla shell with a raspberry curd and buttercream filling in the future.

This Chelsweet's macaron recipe combined with this lemon curd recipe was fantastic! There are a few more ingredients and steps required compared to the other two, but the result is undoubtedly worth it. This recipe even made a fruit dessert hater convert into loving this macaron.

The shell was nice and crispy with the chewy inside and desirable feet. The yellow food gel coloring decreased the amount of feet slightly, but it had far less of an impact than the raspberries did. Everything else was flawless.

The lemon zest, extract, and juice created the balanced sweetness and acidity that I was looking for in the filling. The lemon curd really enhanced the flavor of the macaron; there was a perfect amount of lemon juice to bring the right amount flavor and acidity. Senior Emma Weinstein agrees that the custard enhanced the lemon flavor. "It's a really good balance . . . this one was very good, very lemony vibes, lemony taste. I really enjoyed the lemon custard in the middle, that was amazing," Weinstein said.

The lemon recipe was without a doubt the winner and is now my new go-to recipe for macarons. I highly recommend that everyone try it, even the fruit dessert haters.