The value of the dollar

Reality TV shows like "My Super Sweet Sixteen" or "NYC Prep" reinforce the typical stereotype of rich teenagers, giving the impression that affluence means having money and flaunting it. But these shows, despite being advertised as "reality", do not portray the average lives of affluent teens in Silver Spring.

Though Silver Spring is a world apart from the Upper East Side, Montgomery County is the wealthiest county in Maryland, according to Bill Tzamaras, a Certified Public Accountant for The Reznick Group, a Maryland tax, accounting and business advisory services firm. In 2007, Montgomery County's median household income was $91,440, according to the U.S. Census Bureau. But many well-off Blazers live on family incomes that are at least double this figure. The fact that their parents have money has influenced several Blazers' ideas about money management, so they strive to be discreet about their family's affluence.

Chris, a junior, estimates that his parents make a combined salary of $250,000 a year as a psychologist and a CEO, but he tries to keep this fact of his family life quiet mainly because he sees no need to bring it up with his friends. He does not discuss his family's wealth because he feels that the topic can cross the line of what is considered socially acceptable. Chris says he does not consciously avoid the subject, but he would not bring it up in conversation for fear of alienating himself from his peers. "I don't think I would fit in if I made lavish displays of my wealth," he says.

Even though wealth is not a common subject among his friends, there are apparent clues to Chris's wealth. He says his friends notice the size of his house and the luxuries inside, like an elevator and an endless pool, one with an artificial current to swim against. Another physical indication of his family's affluence, he says, is the recording equipment he has to foster his love for music. 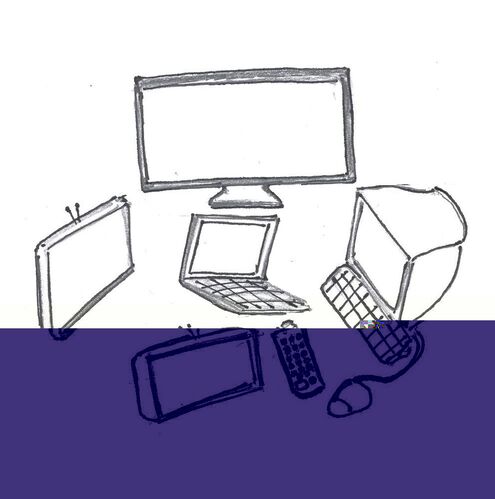 Photo:
Ben, also a junior, lives a comfortable lifestyle thanks to his parents' financial success in finance and science. Each of them, he says, makes slightly more than $300,000 annually. His family owns two houses, each with three floors and at least four bedrooms. They have four cars, and he says his father is also looking to buy a Porsche Panamera. Also in his houses, he counts two 50 inch plasma screen televisions, five other TVs, three LCD and two CRT's, all measuring at least 30 inches and about eight computers. Ben also says that his family is culturally savvy, as they have traveled to places such as Germany, France, Great Britain, Spain and countries all over Asia.

Despite the material extravagance of their lifestyles, these Blazers are far from the "rich kid" stereotypes on TV shows like "Gossip Girl." Jonathan, a sophomore, has lawyer parents; his mother earns $250,000 and his father can make up to $300,000. But he does not ask his parents for money because he knows it is important to understand that in "real life," money comes from a job, as opposed to from parents' pockets.

Brad Boyer, an associate analyst for the financial consulting firm, Maryland Capital Management, has seen mostly the opposite in affluent families, however - family wealth tends to discourage a strong work ethic among the younger generation. "Parents today have helped to create a more entitled culture among children," he says. Chris also tries to eschew this sense of entitlement. "I don't like to show myself as a wealthy person because people would regard me as pompous," he explains.

Even though he tries to minimize money's part in his social life, Chris says he sometimes finds himself at the butt of a joke. "Some [of my friends] kind of make fun of me for it," he says. "But it's all in good spirit."

He says none of his friends resent him for it, but he does feel slightly self-conscious when people pick up on his family's prosperity.

Just as he feels uncomfortable talking about money with his friends, Chris is hesitant to ask his parents for things he wants. "I don't like to ask my parents to buy things for me. It seems cheap," says Chris.

Ben feels similarly and does not rely on his parents to buy everything for him. They cover the cost of basic necessities, like food and clothing, but Ben uses his own money to pay for things he wants. Usually, he says, he spends money on things like videogames and accessories for his computer.

The parents' mentality about paying for wants versus needs and more significant spending decisions has impacted their sons' ideas about money. Growing up with a luxe lifestyle skewed their definition of "nice" or "affordable," according to these students.

Buying what they want without concern for the price tag is easier for these students that grow up in financially stable households. "Sometimes I'll buy things that are a little overpriced without thinking about it," says Jonathan. He first noticed this perspective on money when he was in seventh grade. Before that, he says, wanting something and its price completely unrelated. Jonathan believes that this way of thinking is the result of his parents being generally willing to get him what wants.

Tzamaras confirms this phenomenon, saying that children from more affluent families are generally less aware of money matters than those from lower or medium income families. "They take for granted that they can have anything," he says.

On the other hand, they recognize when their parents' financial decisions are not in line with their own standards of rationality. Chris says his father is an impulse buyer, and the recognition of that behavior makes him more hesitant about spending money. Ben has the same experience with his father; he cringed when his father decided on a whim to buy a second plasma screen television. "I think that's over the top," Ben says.

But Ben does talk about spending with his parents, with his mother more so than with his father. "For my dad, it usually doesn't get anywhere," he says. He asked his mother why she spends money so easily on him and on herself. Her answer, he remembers, was that she is happy to spend money on her children because the money she earns working is meant to support the family.

Even experiencing the wealthy lifestyles and mentalities of their parents has not convinced these students that money is especially important. Although Jonathan recognizes that the more money one has, the more comfortable one's life will be, he says that he does not plan to make money just for the sake of getting rich.

In keeping with this idea, Jonathan says salary will not be a significant factor in choosing his future career. He aspires to become a professional runner, despite the modest pay. Chris shares this perspective and says that even though it would be nice to have the same affluent lifestyle, he is not willing to sacrifice his ambition to work in radio to get it. "If doing what I really want to means I can't have those luxuries, than so be it," he says.