Before she was Wonder Woman, she was princess of the Amazons.

Directed by Patty Jenkins, this thrilling movie takes us on Diana's journey to find her destiny. The story certainly does not lack the thrill and romance that is expected of any classic superhero movie and it goes beyond the superhero stereotype. This inspirational story tells the tale of a woman who wants to live freely and be respected in a world where those qualities aren't important to her male counterparts. 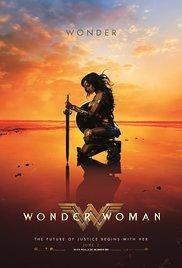 Wonder Woman begins with Diana Prince (Gal Gadot) at the Louvre, opening a strange package from Bruce Wayne. Inside is a photograph of Diana alongside four other men, and a letter from Wayne asking to explain the photo. The viewers are then transported to the heroine's earlier life. Diana is raised on a sheltered island paradise, as princess of the Amazons. From the beginning of her childhood, she knew she wanted to become an unconquerable warrior. After meeting American pilot Steve Trevor (Chris Pine), she is convinced she can end the raging war he tells her about. Diana leaves home and travels with Steve to fight alongside other men to end the war in the outside world. This is where she discovers her true destiny, and goes from a princess to an all powerful superhero.

To be completely honest, after all the build up about this movie, I was expecting a little more. The story of Wonder Woman itself has some sort of originality, until viewers get to the climax where the "twists” are disappointingly cliche.

That being said, the strengths of this movie certainly outweigh the weaknesses. Gal Gadot perfectly fits the role of the charismatic, witty and confident Diana. She is a character that anyone can fall in love with right from the start. Of course her heroic role could not be accomplished without fighting, but her sacred duty towards peace is what makes her stand out as a true superhero in this movie.

Chris Pine embodies Steve Trevor as the sweet guy perfect for Diana by being "different” from the other men. The emphasis on Diana's tribal background, and the Amazons' ambivalent relationship with men make the relationship between Diana and Steve that much stronger. Their romance is part of what shaped Diana into a true hero.

In contrast, The suspenseful and ominous music used throughout the movie adds to the thrill and excitement from the minute the movie begins to the very last scene. The cinematography was sharp and clear, with a range of wide shots to show the vast variety of challenges Diana faces in the outside world.

This thrilling and heartfelt story combines romance, adventure and action to create an inspirational movie that any audience can appreciate.