"The Woodsman" isn't too sturdy

Kevin Bacon isn't enough to save an otherwise poor film

A movie completely devoid of redeeming qualities is tolerable in the sense that nothing seems wasted. However, "The Woodsman" is even more disappointing than such a film because it wastes a remarkably powerful and chilling performance from Kevin Bacon by not offering a worthy backdrop.

Bacon plays Walter, a pedophile who is released after 12 years in prison for molesting young girls and returns to his hometown hoping to start anew and earn back the acceptance of his estranged family and friends. Despite this dream, Walter's story becomes more and more cluttered with adversities to overcome.

Amongst Walter's woes are confrontations from Lumber Yard Factory co-workers who are suspicious of his past. In addition to trying to overcome his label as a pedophile, Walter must decide whether or not to report a man he catches sight of from time to time courting young boys. However, Walter finds comfort and support in his new girlfriend Vickie (Kyra Sedgwick). 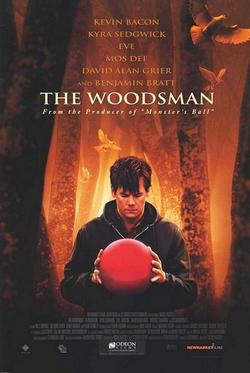 Walter's complex tale is meagerly conveyed by the film's screenplay though, which is written by debut screenwriter Steven Fechter and director Nicole Kassell. The movie shuffles along awkwardly among the film's many side plots. For example, one minute, Walter is about to reach a critical point of self-discovery with Rosen (Michael Shannon), his psychologist, and the next, he's at a bar drinking a beer with his brother-in-law and only friend, Carlos (Benjamin Bratt), talking about mini-skirts, with no explanation of how he gets from one place to the other.

A lack of connection isn't all that afflicts the film's script. "The Woodsman" also fails to bring closure to many of the stories it begins, creating many a plot hole with the movie's weak closing.

Although the script is far from well-written, Bacon still manages to add depth to the otherwise dull film. Unlike Bacon, many of the background characters of "The Woodsman" are sloppily portrayed. Rapper Eve has a supporting part as Mary-Kay, a supervisor who plays a very important role in Walter's work environment. Unfortunately, she gives an especially weak and flat performance.

Worse yet, two main supporting characters are barely even given a chance to develop their promising roles. Sedgwick could have truly been great if her character had been given more lines and depth. Instead, she is mainly featured with Walter in pointless sex scenes that make up most of the couple's "development." Like Sedgwick, Mos Def, who appears later as Sergeant Lucas, is very convincing in his scenes where he pursues Walter because he believes that Walter is still harassing young children. But Mos Def is only given a few scenes to develop a role that was meant to connect various aspects of the plot.

In addition to being feebly constructed, "The Woodsman" tries too hard to be heartbreaking and dramatic and instead comes off as melodramatic schlock. The soundtrack consists of pseudo-modern-classical music that seems more appropriate for a Lifetime made-for-TV movie than a serious dramatic film. The cinematography also botches attempts at seriousness, using clichéd symbols and tired imagery, such as dark nights that are supposed to suggest a connection to Walter's soul and pathetic shots of Walter in solitude on his daily ride home on the bus in a sorry effort to add thoughtfulness to the film's visual mood setting.

"The Woodsman" is overall an inadequate attempt to tackle a provocative and pensive premise. A subject as serious as pedophilia and reformation doesn't need a cheesy overcoating it needs a sincere portrayal.

"The Woodsman" (87 minutes) is rated R for sexuality, disturbing behavior and language. It is now playing at the AFI Silver Theatre and Landmark E Street Cinema.