Trump began his speech by praising law enforcement officers, saying that he is a big supporter of police officers, sheriffs and Immigrations and Customs Enforcement (ICE) officers. He promised to arrest and deport illegal immigrants on American soil. "I have a simple message today for every gang member and criminal alien that are threatening, so violently, our people. We will find you, we will arrest you, we will jail you, and we will deport you," Trump said in his speech.

According to Trump's speech, at least 42 illegal alien minors in Washington, D.C., were recently involved in MS-13 violence, 19 of whom were involved in attempted manslaughter. MS-13, or Mara Salvatrucha, is a transnational street gang responsible for murders, drug dealing, and extortion in many communities in the Los Angeles area.

Trump stated that funds to build a wall running along the U.S. and Mexico border were approved and that the new security measure will keep out drug cartels and traffickers. "Fact: last night, it was approved 1.6 billion for phase one of the wall. The wall is vital for ending the humanitarian disaster brought on by drug smugglers and human traffickers," Trump said. 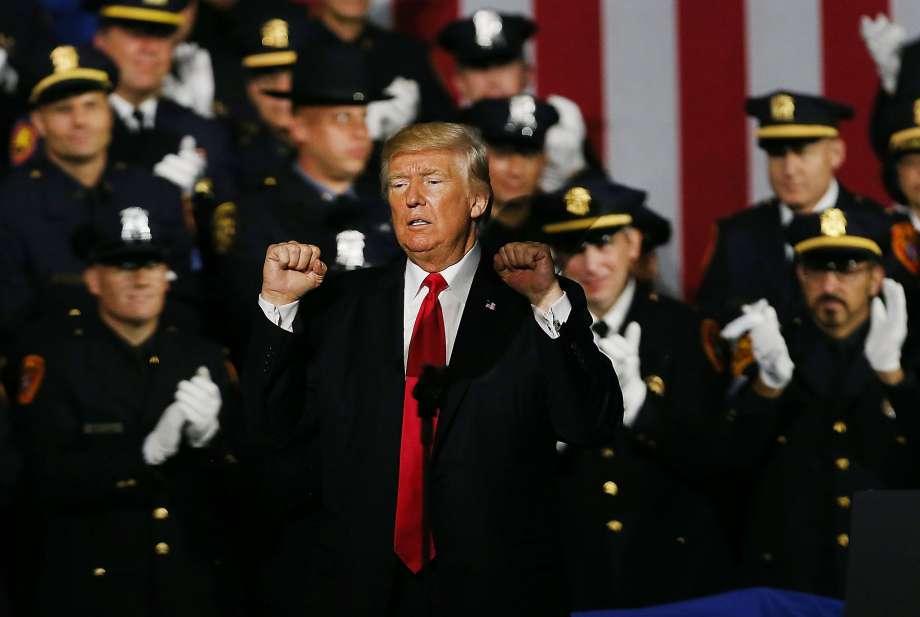 Trump then criticized the Obama administration's open-door policy, expressing the idea that all immigrants from Central America have joined drug cartels. "The previous administration enacted an open-door policy to illegal immigrants. As a result, MS-13 surged into the country. New arrivals came in, and they were all made recruits of each other," Trump stated.

Keeping with his main theme of crime and criminals, Trump later criticized police for treating suspects and arrestees too kindly. "When you see these thugs being thrown into the back of a paddy wagon– you just see them thrown in, rough– I said, 'Please don't be too nice,'" Trump said.

Trump gave police verbal permission to rough-handle suspects. "When you guys put somebody in the car and you're protecting their head...Like, don't hit their head and they've just killed somebody? I said, 'You can take the hand away, okay?'" Trump said.

Baltimore is also involved in efforts to build trust between the police force and Baltimore residents. "Police misconduct or acts of brutality is not a joking matter. We are working diligently in Baltimore to build relationships of trust and respect between our police officers and the community," McCarthy told the Baltimore Sun.

Blue Lives Matter, a group that seeks to honor law enforcement officers and their families, assured reporters that Trump's comments regarding police brutality were not taken seriously. "Do these people actually realize that this was a joke and not a policy change? It seems not," the group wrote on their website.