Blazers find a new, easy way to express themselves online

Juniors Janet Henkai and David Struewing see a list of unusual activities they can only dream of listed on a friend's blog. "I want…to have a soundtrack to my life, to go streaking, to paint my entire body silver and run down Blair Boulevard, not caring what anyone thinks or says to me…" Interested in the list, the two decide to "reblog" it onto their Tumblr blog. Immediately, followers of Henkai and Struewing's shared blog react. The list is soon liked and reposted by fellow bloggers, both friends and strangers. In the span of just a few hours spent on their shared blog, Henkai and Struewing have 15 posts combined. It is just another typical evening for the bloggers of "Vegetarian Meat."

Photo:
It has become increasingly common in the last two to three years for teenagers use blogging sites to articulate their thoughts and feelings to a worldwide audience of willing readers. Fourteen percent of teenagers who use the Internet keep up a blog, according to a study released recently by Pew Internet and American Life Project, a non-profit organization devoted to research on the impact of the Internet on daily life.

Tumblr is yet another outlet for teens to express themselves. Founded by David Karp in 2007, Tumblr is an online blogging site, a user-friendly medium that allows bloggers to express themselves by sharing photos, links and videos. Blazers who have created blogs on Tumblr concur with the site's motto, seeing it truly as "the easiest way to blog."

Superior to a social network
Though Henkai and Struewing enjoy accessing personal profiles on the popular social-networking site Facebook, both of them appreciate the creative freedom that Tumblr provides. The team-bloggers explain that Tumblr gives users an easier way of expressing themselves due to its simple format. "There's no real structure unlike other forums like Twitter and Facebook," Henkai says.

The bloggers add that they feel more welcomed by the Tumblr community as opposed to members of the Facebook community. They believe Tumblr has a unique energy that better encourages self-expression. "The Tumblr community is better," Struewing says. "It's just a bunch of cool people." Henkai adds that Tumblr promotes only constructive online behavior. "It's more of a positive feel than Facebook," she says. "There's really nothing negative to do to others."

To Henkai, one of Tumblr's greatest assets is the sense of anonymity. "Unlike Facebook, you don't have to know the people that are on Tumblr," Henkai says. "You don't know who they are and they don't know who you are so you can kind of portray yourself however you want."

"The easiest way to blog"
Freshman Clare Lefebure has used Tumblr's freedom to explore photography. With an affinity for art and performing, CowgirlBlues scrolls through her dashboard, visiting the various art-inspired Tumblr blogs she enjoys following. As she moves from page to page, seeing several artistic photographs of landscapes and beach scenery, this young blogger can't help but reblog the beautiful images of the beach in the winter onto her own Tumblr page.

Photo: Freshman Clare Lefebure uses her Tumblr to post photographs and works of art that she enjoys.

Photo: Freshman Clare Lefebure uses her Tumblr to post photographs and works of art that she enjoys.

Like Henkai and Struewing, Lefebure prefers Tumblr for certain features that make sharing information simple and fun. Lefebure explains that Tumblr's "Dashboard" feature makes visiting other blogs much simpler. "Instead of having to go to all the different Tumblrs that you like, you can just 'follow' a person," she says. "All of their posts just show up on your dashboard along with everyone else who you follow's posts." Struewing compares the "Dashboard" to the standard Facebook News Feed. "The dashboard is like a mix of all the stuff you like," he says.

Lefebure decided to join the Tumblr community after being inspired by other Tumblr blogs. What struck her most, Lefebure explains, was Tumblr's ability to provide her with an easy-to-use forum to make a statement. "It's really just the perfect place to express yourself - budding photographers often post their photos, artists can scan their drawings, writers can post their poems or writings," she says. "It's also a really good place to be inspired because there are just so many creative people on Tumblr."

Motives to Tumbl
Tumblr's site explains that it allows users to "effortlessly share anything." Struewing appreciates that Tumblr allows him to view posts by other bloggers that include such items. "There's a lot of interesting material that you wouldn't see otherwise," he says. 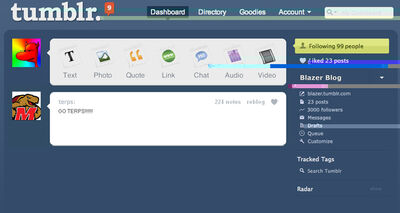 Photo:
While Henkai and Struewing enjoy reblogging other users' posts onto their shared blog, the pair also like that Tumblr provides a safe environment to vent personal feelings. Most users are comfortable expressing their emotions, even talking casually about anything from friendships and relationships to how their day went. "A lot of people like to rant on it," Struewing says. Henkai agrees. "It's a place for whiners but everyone whines together," she laughs.

Although it serves as yet another online blogging spot, Henkai, Struewing and Lefebure all recommend Tumblr to Blazers who seek a safe and easy-to-use forum for expressing themselves. Struewing values Tumblr for allowing him to interact with people who are interested in the same things as him by giving him access to their blogs. "There's a lot of people that I know in real life but there's also a lot of people that I don't know that I've met over Tumblr because we have similar interests," he says.

Lefebure appreciates Tumblr for serving as an online forum allowing users to share their own artistic work and view the work of fellow bloggers. "If you're a budding artist of any kind, be it a photographer or a writer or an artist, I would highly recommend getting a Tumblr," Lefebure says. "It's the perfect place to find inspiration, share your work and get in touch with other creative people."