Turning your short story into your own short film

Literature as film class makes their own short movies

There is a classroom full of anxious kids. Some talk in nervous excitement while others sit quietly, waiting for class to start. Soon the teacher is in front of the classroom, trying to loosen things up by telling a few jokes. The class roars with laughter, obviously enthusiastic for the event about to take place. There is a podium standing front and center in the room and Oscar posters hanging on the front board to give the atmosphere of an awards show. The suspense is running high as groups huddle together, listening intently for the announcements.

These announcements are for the Horne Movie Awards (HMA) in English teacher Michael Horne's Literature as Film class. This is a class dedicated to reading novels and watching the movie-inspired versions of those novels. But the most exciting part of the class occurs when students write their own short stories and make them into movies.

Students began the semester writing their own 10-page short stories. Horne says he needed some way to tie all of the stories together 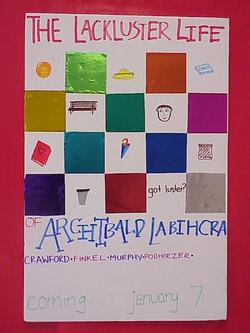 Photo:
without taking away the creative freedom of the students. So he came up with five elements to include in the story: a reference to literature, an apple, a single flower, a pun and a well- known piece of music. "You can use these things in any genre," he explains.

After writing these stories, students shared their work with each other and split into groups with four to eight people in each, choosing a story to make a movie into. Then came the really hard part: converting their story into script form. According to Horne, this conversion process can be very difficult because you have to leave out so much and change so many things. "In watching movies that were inspired by books and short stories, we saw how much they had to take out and change in order to make a good movie," he explains.

The students found that they had to do the same thing when writing their own script. "Writing the script was very time-consuming because we had to make speaking parts for everyone. That was especially hard because there wasn't a lot of dialogue in the story we chose," says senior Patrick Brice, who used a classmate's story to write the screenplay for his group's movie.

According to the students, converting their stories to script was a lot of work, especially for an elective class. Horne believes that the kids enjoy this work because 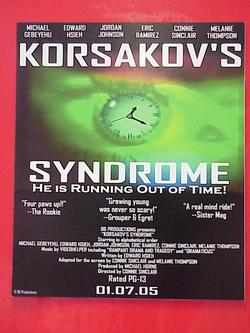 Photo:
those who take his class tend to love movies. "A lot of the kids have a good background [in movies] and are drawn to movies that are more indie movies because they are more interesting and quirky," he says, smiling.

This love for movies is shown in their very own labors of love that they spent so much time on. The movies range from the silly, upbeat film "The Lackluster Life of Archibald Labichra" to dramatic suspenseful movies like "Korsakov's Syndrome." Though very different in plot, all of the movies were excellent, according to Horne. "The quality was very good. I think this was the best year for quality," Horne says with a sense of pride in his voice.

Though there were many different types of movies, the suspense genre reigned as most popular. Horne says that there tend to be a lot of suspense and mystery movies every year. "Many kids like those kinds of films because they have twists to them. They are fun to watch, and [the suspense genre] allows them to be both humorous and serious," he says.

And the award goes to…

Once the students watch all the movies, they nominate movies for their version of the Oscars.

Though all the groups did an outstanding job on their movies, two of them pretty much swept the awards. Senior Zachary Podhorzer won Best Producer/Editor and 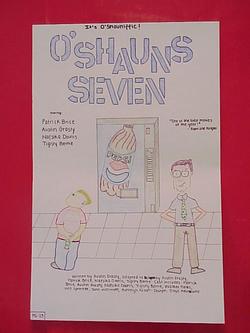 Photo:
Best Director for "The Lackluster Life of Archibald Labichra" and thanked his cats Guiness and Mr. Bojangles in his acceptance speeches. Senior Lauren Finkel won for Best Supportng Actress and also thanked Podhorzer's cats. "It Can Never Be Perfect," a creepy suspense film, got four awards. Senior Will Sprecher took home the HMA for Best Supporting Actor, senior Graham Matthews for Best Actor and senior Walker Davis for Best Screenplay. Sprecher, Matthews and Davis, along with junior Amelyne Major, all won the Best Picture HMA for "It Can Never Be Perfect." Senior Samantha Russel won the Best Actress award for "The Mona Lisa." Senior Edward Hsieh won the Best Promoter award for his professional-looking poster for "Korsakov's Syndrome."

The students clearly enjoyed the awards ceremony. "It was a fun way to wrap up the semester," senior Anna Murphy says with a twinkle in her eye. "[The awards] were a nice way to honor the people who had worked really hard and obviously wanted to do well on the project."