The first alarm was set off when a sprinkler in the first floor stairwell adjacent to the wrestling room was removed. The student who caused the first fire alarm was apprehended and arrested. The removal of the sprinkler caused a small flood at the end of the P.E. hallway. 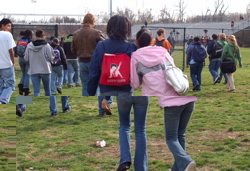 Photo: Students head towards the stadium for the second time on Nov. 20 after another alarm sounds.

Photo: Students head towards the stadium for the second time on Nov. 20 after another alarm sounds.

According to security official Mac McDuffie, the flooding was about an inch high, and no significant damage was reported. The flood was quickly alleviated with the use of "water-pumping machines and squeegees." As the situation was investigated with the assistance of the fire marshal, students were quickly evacuated and held in the football and baseball stadiums.

After students and staff were readmitted into the building, P.E. staff restricted access to the affected part of the hallway and relocated the weightlifting class to the SAC. According to P.E. teacher Emanuel Charles, the area should be operational by fourth period and was restricted to "prevent any injury from the damp floor."

The second fire alarm, which sounded as students prepared to change from fourth period to 5A, was also a result of sprinkler system complications. As technicians worked to repair the alarm system, the delay in the system to respond caused concern and prompted a second evacuation. The school's building manager asserts that the second evacuation was "just a precaution" and no emergency personnel reported to the school.

The two evacuations, lasting about twenty minutes each, were short disruptions in the classroom and cancelled activities such as a speech from Student Member of the Board Sarah Horvitz, which was scheduled for second period.