In their fifth game of the season, varsity girls' soccer found themselves trailing for the first time – a 0-1 deficit at halftime – against a Blake program that has had the better of Blair for the past four years. Yet the Lady Blazers demonstrated once again why they are top division contenders, stepping up their offense for three goals in the second half, including two by senior forward Susie Branson, for a 3-2 victory. Blair remains undefeated with a perfect 5-0 record.

Photo: Senior Paige Munger steers the ball away from a Blake player.

Photo: Senior Paige Munger steers the ball away from a Blake player.

Head coach Robert Gibb was enthusiastic about the win and the journey to achieve it. "It felt good to come from behind and pull it out," Gibb said. "It's better to experience that now rather than later on in the season." Gibb emphasized the importance of the win, saying that a loss would be a crucial setback towards clinching the division title.

The second half started out more promisingly for Blair. Senior captain Anna Rassman said that they marked people tighter and picked up their intensity in the second half. With 23 minutes left to play, Branson scored the first her of two goals on a pass from freshman Jamie Kator. Four minutes later, Branson added again to the scoreboard, breaking free on a through ball form sophomore Sofia Read and finishing a one-on-one with Blake's keeper. The Blazers added some insulation on a shot by junior Kelly Pelz-Butler to secure a 3-1 lead. "I'm glad that we picked it up in the second half," Pelz-Butler said. "It felt amazing."

During halftime, a group of Argentinean soccer coaches who had attended Blair's practice last week came into the stadium, singing spirited songs and cheering for Blair. Gibb rallied the team by reminding them that Blake was a lesser team statistics-wise, yet Blair had not beaten them in the past four years.

"It helped a lot when the Argentinean coaches came," Rassman said. "It always helps when the crowd is really into the game." The Argentineans sung songs and cheered fervently for the lady Blazers during the second half, engaging the rest of the crowd and boosting Blair spirit. "They made it fun, festive and exciting," Gibb said. 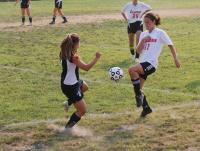 Photo: Junior Jenna Williams faces off against a Blake opponent.

Photo: Junior Jenna Williams faces off against a Blake opponent.

Throughout the first half, Blake's aggressive play left Blair behind. Senior captain Annie Worden said that Blair missed crucial scoring opportunities and was shutout for the first half. "We came out lazy and lethargic," Worden said. Seventeen minutes into the game, Blake was able to slide a goal past senior goalie Xenia Oroxom. Rassman attributed Blake's dominance in the first half to Blazers losing ball control during one-on-one encounters.

Blake struck back later in the game, with thirteen minutes to go left. Freshman goalie Lena Meyerson dived to the right but was unable to block the goal, chipping down the Blazer's lead to 3-2. However, with less than a minute to go, Meyerson came through for the Blazers by blocking a similar shot from inside the box, ensuring a Blair win.

The Blazers' next home game is Wednesday, Sept. 24 against Magruder at 5:00 p.m.