The Blazer girls' varsity tennis team (5-2) defeated the Einstein Titans (0-7), a Division-IV team, in a commanding fashion, sweeping the Titans 7-0. The win was a great rebound for the Blazers after Tuesday's loss against Walt Whitman, a Division-I team. 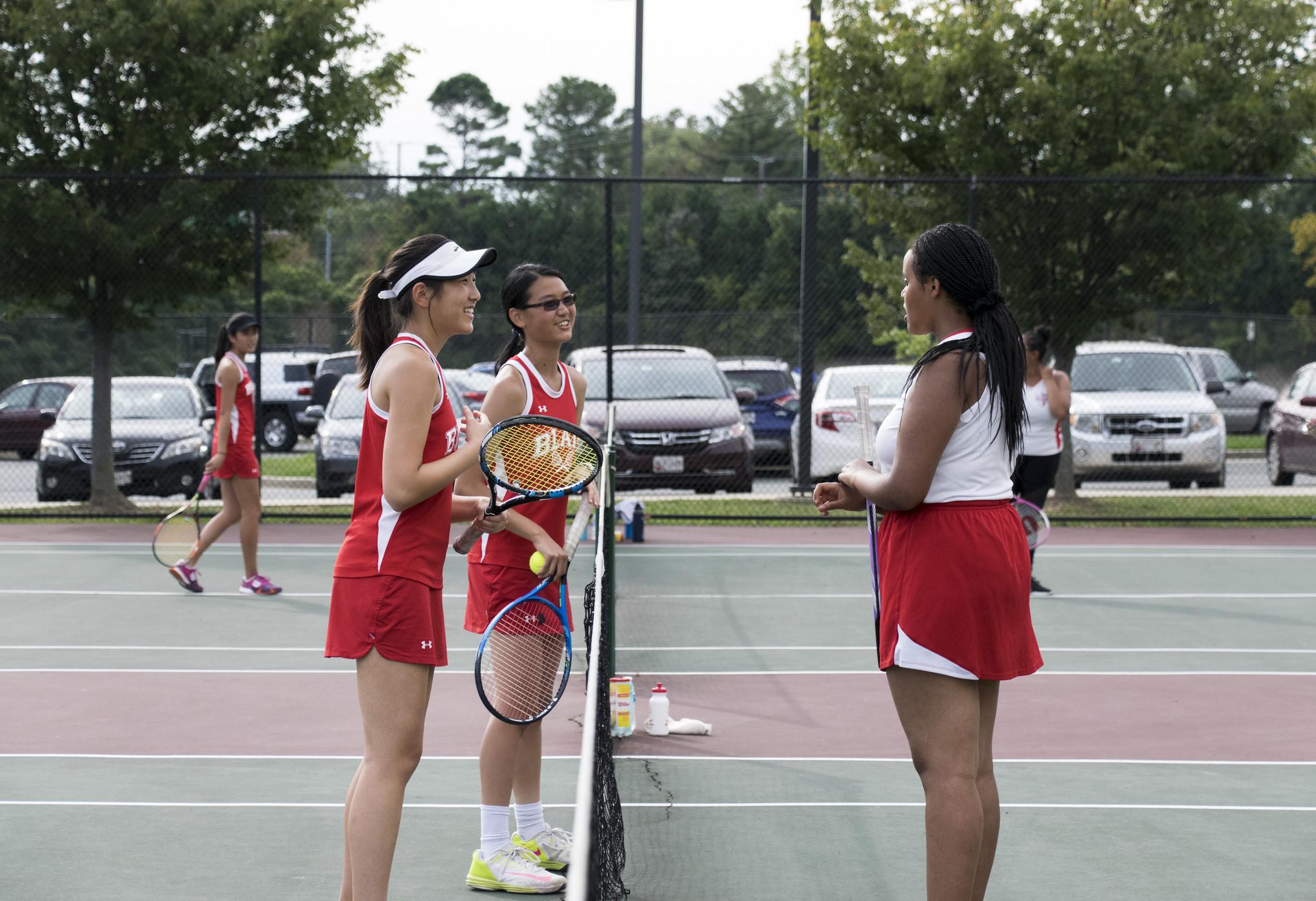 Photo: Captain Christine Cho and freshman Catherine Lo say hello to the Titans before a match

Photo: Captain Christine Cho and freshman Catherine Lo say hello to the Titans before a match

Unlike the game against Walt Whitman, the Blazers entered the courts with more confidence about their prospects of winning, because Einstein is in a lower division. "There was definitely not as much pressure [as on Tuesday]. It was more relaxed," Sophomore Mary Chang said. The Blazers were able to settle in and play their game, hitting accurately and forcing mistakes from their opponents.

Captains Caitlin and Gillian Lee, along with co-captain Christine Cho and freshman Catherine Lo, played excellent games. Both pairs easily vanquished their opponents with their superior technique and accuracy. "We did focus a bit more on technique, like hitting down the line or hitting away from the opponent, I think we did a good job," Cho said. Caitlin and Gillian's spins and Cho and Lo's accurate hits gave Blair the upper hand in the doubles matches.

The Blazer singles likewise pulled off impressive victories. Captain Priscah Rodenhuis, junior Isabella Hunt, Chang, and freshman Rabbera Hordoffa consistently served to the edges of the service boxes, making it harder for Einstein to return the serves. Rodenhuis, Hunt, Chang and Hordoffa, who did not show any signs of weariness until the end of the game, pounded the balls to the opponent's side and forced the Titans to run back and forth across the courts, bringing home a remarkable win.

In comparison to Tuesday's game, coach Ngbea pointed out that the Blazers made fewer mistakes and were more prepared, which resulted in their substantial victory. "Today we made far fewer errors...which translated into a good lift and a good finish," Ngbea said.

Throughout the game, Einstein's girls did not put power behind their serves; instead, they let the serves bounce lightly off the rackets, which made it easier for the Blazers to return the serves. This helped Blazers to relax and focus more on refining certain techniques, like the volley.

Although Blair did win this match, Cho cautions that the amount of effort the team puts into winning the game should not be based on the experience level of the opponent. "Just because the opponent seems easy shouldn't mean you should also go easy on them. You should try harder and try to work on more things," Cho said.

The girls' varsity tennis team will play its next home game on Wednesday, Oct. 4 against Richard Montgomery High School.