In the final home game of the season varsity softball falls to the Bengals, 5-4

In a heartbreaking end to their regular season at home and their fourteen game winning streak, Blair's Varsity softball team (14-2) was narrowly defeated by the Blake Bengals (11-2). It was a tough game for the Blazers, who started out strong but slowed throughout the game and never quite recovered. A late seventh inning rally seemed like it might turn the game around for the Blazers, but a bad call in the bottom of the eighth inning ended the game, 5-4, Blake.

The Blazers began the game with strong offense and defense. At the top of the first two innings the defense excelled. They quickly and easily ousted each Blake player at bat. At the bottom of the second, the Blazers scored the first run of the game. Catcher Maria Cruz hit a liner straight over the pitcher's mound that Blake failed to field properly. She advanced to first and relief runner Izzy Lott subbed in for her. Junior Reva Kreeger then hit a triple that sent Lott home. 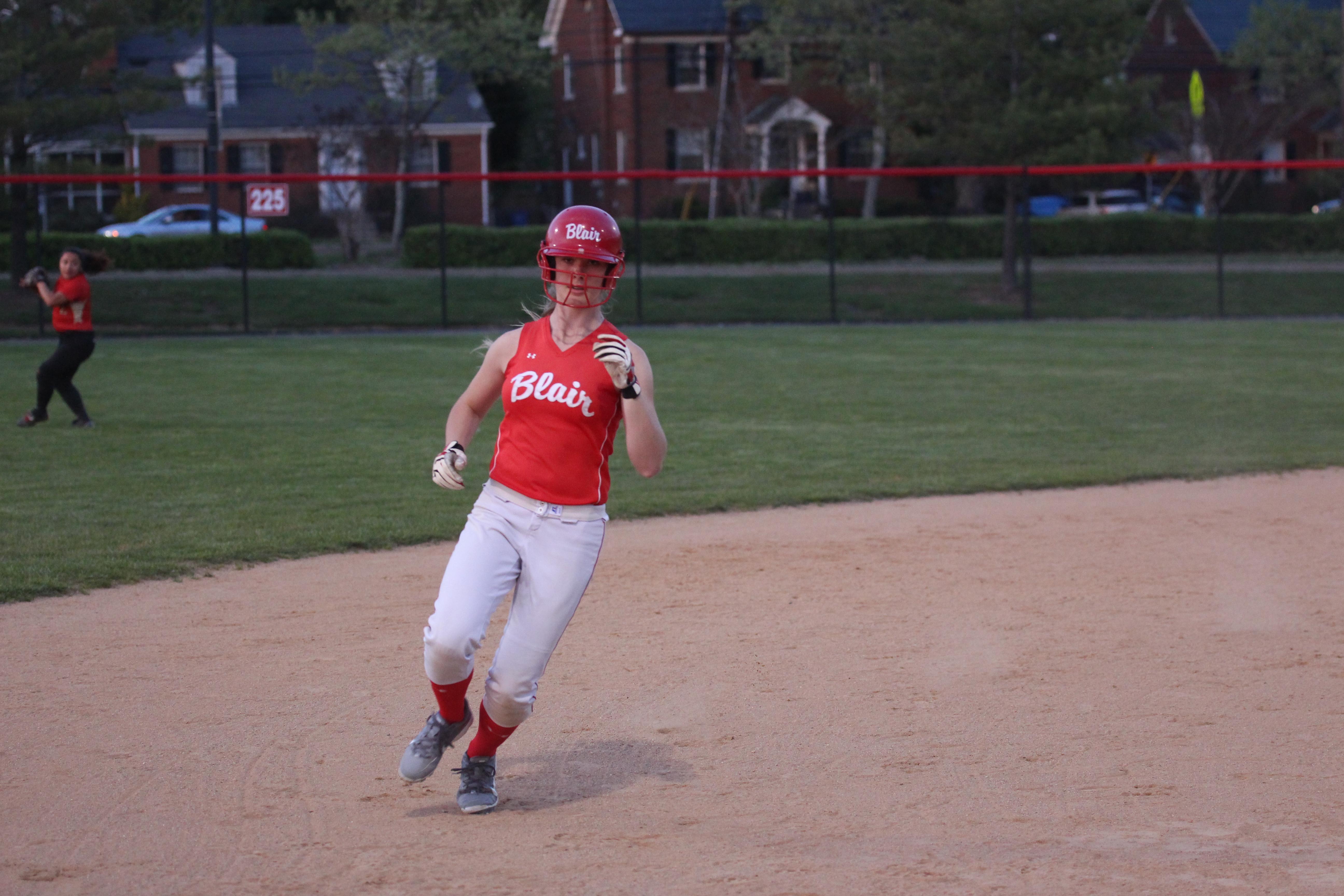 Photo: Senior Megan Houlihan sprints to get to the next base.

Photo: Senior Megan Houlihan sprints to get to the next base.

After this strong start, the team's great defensive communication and strong offensive showing carried them through the next two innings. It was in the fourth inning that their strong start began to dissolve. Blake scored its first run at the top of the fourth inning after the Blazers made small fielding errors. But the defense quickly recovered and with two players on base, a stellar catch by sophomore Alison Mackenzie in the outfield kept Blake from scoring.

The top of the fifth inning was characterized by key fielding errors on the part of the Blazers. Blake hit multiple grounders that the infield defense had trouble keeping control of. Despite an attempted defensive rally, Blake scored three more runs during the fifth inning.

With the Blazers down by two runs, an offensive rally during the seventh inning renewed hope that the team could turn the game around. With junior third baseman Mildred Devereux on third and senior Kerry Madden on first, senior Megan Houilhan hit a liner straight into right field that sent Devereux home. Madden soon scored a run that tied up the game.

The tie at the end of the seventh sent the game into extra innings. Blake scored its final run of the game during the eighth inning. The bottom of the eighth was a high stakes situation for the Blazers as two more runs were all they needed to turn the game around and make a striking comeback. A tiebreaker rule meant sophomore Lily Montgomery started out the game on second. She quickly stole third and with outfielder Anna Reachmack on second and two outs, the next at bat was crucial. Confusion ensued at the end of the game after senior outfielder Andrea Brown made a beautiful hit and slid into first. She was called out by the ump after being tagged by a Blake baseman, but it looked like she was safe. Despite this disparity, the game ended with Blair down one run. 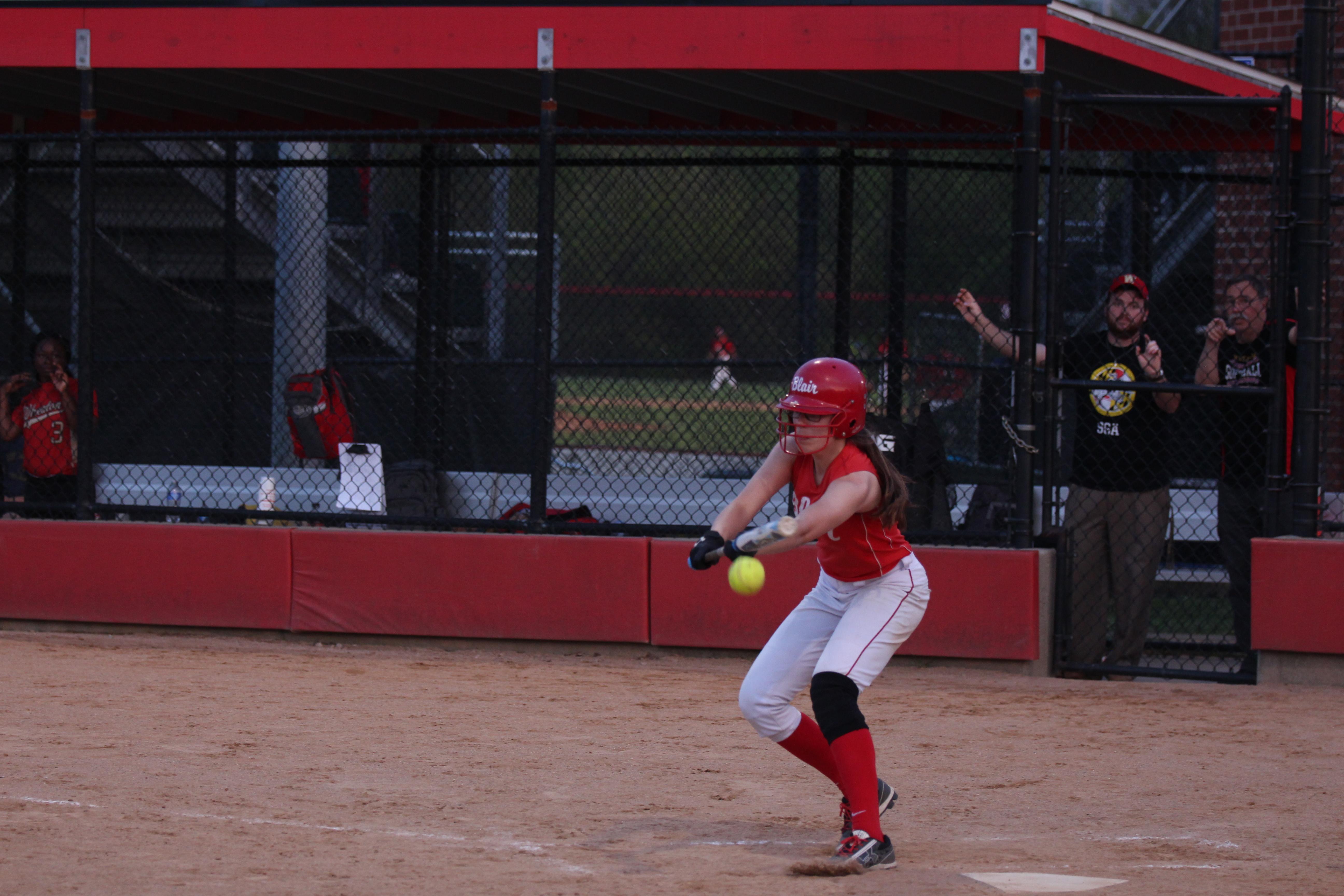 Senior second baseman Camille Arias explained why the loss was important to her. "Personally it's a hard game for me because it's our last regular season game at home.” But Arias was proud of the team's fighting spirit throughout the tough game. "It was a really competitive game and a really hard game but I think we fought well and we fought hard until the very end.”

Coach Louis Hoelman agreed. "I felt that we battled the whole way and that's what this team has been doing all year and it's what's been making us have a really good season so far,” Hoelmann said.