The comeback kid of the alternative music scene, Andrew McMahon (formerly of Something Corporate), is striking out on his own. Releasing a solo album under the stage name Jack's Mannequin, McMahon's self-invented genre of "piano rock" is captivating audiences and selling out venues nationwide with the rocker's latest "West Coast Winter Tour." McMahon tore it up at the 9:30 Club in a two-night stint on Feb. 25 and 26, making it plain that while he may be sans Something Corporate, he sure isn't lacking in talent.

The long-awaited tour showcased Jack's Mannequin's first album, "Everything in Transit." Released in 2005, the album's promotional tour was put on hiatus after McMahon was diagnosed with acute lymphoblastic leukemia shortly before the tour was to begin. After a year of treatment, his disease went into remission and McMahon was healthy enough to perform, allowing Jack's Mannequin to join Panic! At the Disco on their widely successful "Nothing Rhymes With Circus" tour and to now headline their own "West Coast Winter Tour."

Mirroring the order of their album, Jack's Mannequin opened with "Holiday from Real," a classic ode to California, which the band calls its "picture of perfection." A feel-good sing-along, "Holiday from Real" set the west coast vibe for the rest of the show, embodied by McMahon's croon, "Oh, California in the summer/Ah, and my hair is growing long/ [expletive] yeah, we can live like this."

Before launching into the rest of the set, McMahon gave the audience a glimpse into his personal life. Feeding the crowd with short vignettes and quips, McMahon poked fun at politics and his fellow rockers. The audience roared as he launched into a Bush-bash, explaining the premise of the ballad "The Last Straw." A blunt jab, the lyrics admit " I stayed home took a Vicodin.../Sometimes it's all that I can do/When I think about the president/How did he become the president?"

The crowd grew even wilder when McMahon pulled a mock exit, only to be called back with a thunderous encore. With a sly smile, he slunk back on stage. "Some call it an encore…I call it a lager break," he teased. 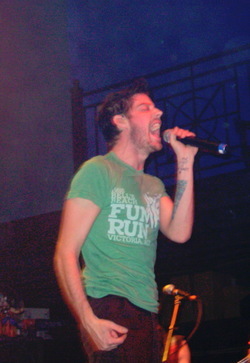 Photo: McMahon belts out the lyrics to "Bruised."

Photo: McMahon belts out the lyrics to "Bruised." Photo courtesy of Kate Harter.

The rest of the set included album singles "Dark Blue" and a revised "West Coast Winter Tour" version of "La La Lie." Drawing from his previous success, McMahon also featured Something Corporate classics "21 and Invincible" and "She Paints Me Blue." By far the most touching part of the show, McMahon introduced "21 and Invincible" with the story of his 21st birthday; relaxed and carefree, McMahon had not yet been diagnosed with leukemia and the song served as a flashback to his lackadaisical lifestyle before the bombshell.

The tour also pulled together rising bands from around the country; featuring We Are the Fury from Toledo, OH., Chi-town's newbie The Audition, and the more established Head Automatica out of NYC.

Clad in chic leather to disguise their small town roots, We Are the Fury took the stage first. A surprising splash of dance-infused Brit pop, retro and indie bred in the American Midwest, We Are the Fury is a refreshing new sound for fans of Jet or Arctic Monkeys. Exuding a commanding stage presence, vocalist Jeremy Lublin turned fans on to their unique style and catchy chorus lines. A much less impressive The Audition took the stage next, taking the energy level down a notch with a sub-par performance. Redeemed only by his gimmick of crazy hair, lead singer Danny Stevens had strong stage presence but a mumbly voice, a significant detraction from the performance.

The moment lead vocalist Daryl Palumbo of Head Automatica walked on stage a few minutes later, it was clear that the audience hadn't seen nothin' yet. Third up to perform, HA gave the audience not a moment's rest before exploding into energetic brouhaha with hits like "Graduation Day" and "Lying Through Your Teeth," both fresh off their latest album "Popaganda." Prompting boisterous moshing and loud encouragement, HA displayed a much more rock-heavy vibe than did headliner Jack's Mannequin, a tell-tall sign that HA was actually the main attraction for many concert-goers.

A showcase of different facets of the punk rock variety, Jack's Mannequin's "West Coast Winter Tour" was an eclectic yet smooth mixture of head-banging hits and dance-inducing jams, an appropriately loud and warm reception for McMahon back onto the stage.