Blazers have turned to the power of social media to not only share funny fads and silly selfies, but also to start revolutions. Just in the past couple months, movements such as #Black CAP, #CheerForUsToo and #WhoAmIDistracting have taken flight on Twitter in hopes of bringing more attention to issues students face every day here at Blair.

As many student activists at Blair are finding out, 140 characters can make a huge difference.
Since nearly 71 percent of teenagers use some form of social media and 92 percent of teens say that they use the internet daily, social media has a wide reach for students who want to spread their messages.

Freshman Sofia Cuadros knows exactly how it feels to be called out for breaking the dress code. While in class one day, Cuadros felt a tap on her shoulder. She was then told by her teacher that her tank top was too distracting and not acceptable for school. "The teacher called me out so publicly. I had to walk out of the classroom," she remembers. With hot hands and a red face, Cuadros walked herself out. When she returned, she was wearing a hoodie and sweatpants to cover up her clothing. "It was just a tank top--not even with spaghetti straps. My shoulders were exposed and that was the problem," Cuadros comments.

Dress codes have long been a subject of contention, but with the growth of social media and student participation, the topic has spurred much heated debate. Across Twitter, Blair girls are posting pictures of their seemingly innocent outfits with punchy captions like "I just got dress coded. #WhoAmIDistracting.”

Blair's dress code states that "when necessary, administration will judge if clothing is disruptive to or inappropriate for school." Nowhere in the code does it say to discriminate between the boys and girls, however, girls feel like they are being called out more than boys. On Twitter, girls are telling their "dress code stories."

Junior Eleni Hailu is a strong supporter of the movement. She cheers on her peers at Blair in their digital efforts to spread awareness. She herself was called out in the middle of her tech class because the teacher felt her clothes were not appropriate for school. "I was wearing this cropped shirt, but it wasn't even that cropped. It just floated up a bit at time and maybe showed a bit of my stomach," she explains. Hailu even suggests that the dress code can be racially discriminating. "I don't want to be the one to say it, but I think I have to. I feel like that if a black or African-American is wearing anything, they are more likely to be told something," she admits.

There are many different sides when it comes to the dress code, and students at Blair have turned to the web to express themselves. 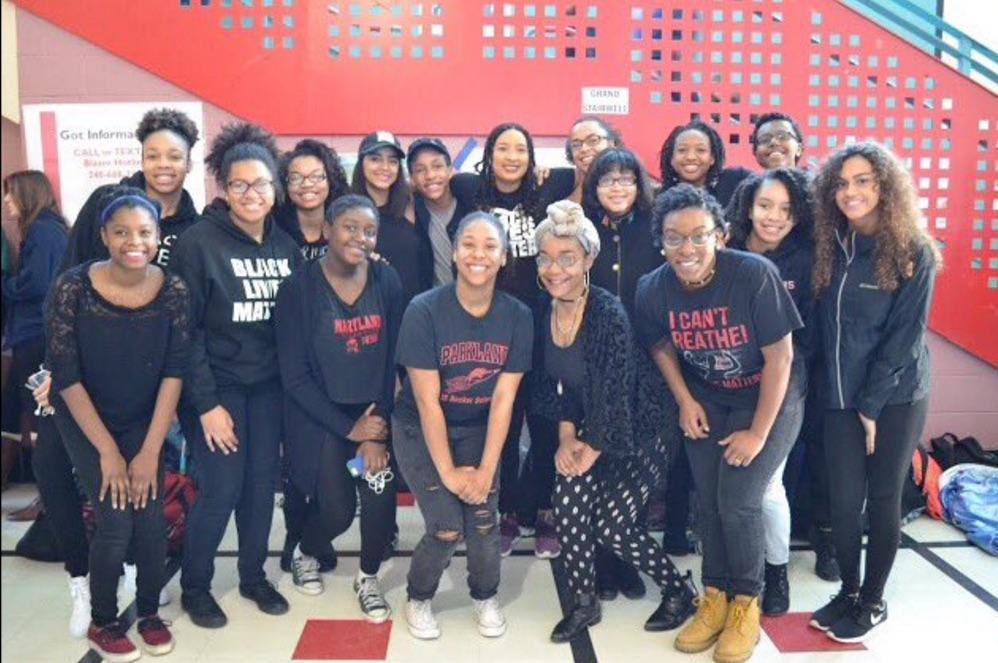 Photo: Students who have formed Black CAP wear all black to bring attention to their cause.

Photo: Students who have formed Black CAP wear all black to bring attention to their cause.

The campaign has gotten an overwhelming 11,400 impressions, or likes, on Twitter over the last 28 days. Their presence on social media has been so extensive that they were featured in an article in the Washington Post. "Social media helps keep our momentum going and keeps people who may not be able to attend meetings or events in the loop. It also provokes conversation about specific issues that need to be discussed," Swann says passionately.

The group was started in school by CAP students of color, who later took the campaign online with the hashtag #BlackCAP. "The goal of Black CAP is to diversify CAP. Not just the student body but also the curriculum and the teaching material. We want students of color to feel comfortable and represented in this program and not feel like outsiders," Depenyou says. The students who make up Black CAP believe that the lack of diversity affects not only the students of color, but also the program as a whole. "Diversity in programs is extremely important. It provides an environment in which people can learn from others who have had different life experiences than them. And even though this may be difficult, it provides better perspective on issues that people will face in the real world," sophomore Alix Swann says.

In order to work towards their goal of increased diversity, the students have begun to have meetings with teachers and administration. They plan to have outreach events at middle schools as well as more events like #BlackCAP blackouts in order to continue raising awareness about the racial inequity in not only CAP but other magnet programs as well. While they are making noise in ways such as these, social media is still a huge part of their campaign.

Social media has provided Depenyou and the rest of Black CAP with a platform to speak and empower their voices. "It has allowed us to reach out to various people and to have various people reach out to us as well and helped us spread the message a lot quicker," Depenyou says. 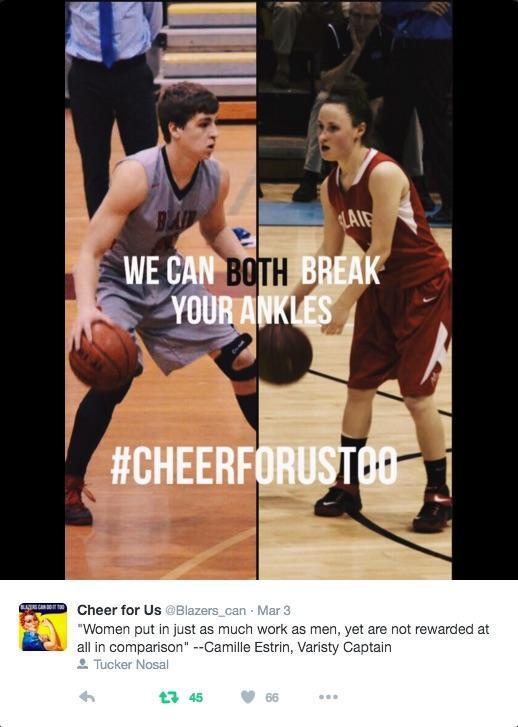 Photo: This picture, featuring the two varsity basketball captains, became one of the biggest images of the Cheer for Us movement.

Photo: This picture, featuring the two varsity basketball captains, became one of the biggest images of the Cheer for Us movement.

Freshman Courtney Wyche has been playing sports her entire life, and that's what she plans to do for the rest of it. Through her hard work and dedication to softball, she has become one of the top players on the varsity team just as a freshman. She has made it her life goal to play professional softball. "My goal is softball. That's it," she says definitively. Yet ever since she was young, she's been on boys' teams. She started out playing on an all boys' t-ball team, and still feels like she doesn't get as much as attention as them. "The shine is always on the boys," she says sadly.

Blazers have been tweeting about their own sports, tagged with #CheerForUsToo. The #CheerForUsToo hashtag has allowed Blazers to bring attention to the disparity between the attendance and appreciation for men's sports and women's sports starting at the high school level. It urges people to support female athletes as much as they support male athletes.

Kenneth Smith's sociology class brought the issues to the spotlight through Twitter. The assignment asked students to create a public service announcement for a social justice movement aimed at Blair students about something they care about and something that other students would care about, too. Many students created posters and posted them to their twitter accounts, hashtagging them with short, powerful phrases. From there, they took off.

One of the main images that has come from this Blair Twitter campaign features two Blair basketball players put side by side. One is a boy and one is a girl and they are wearing Blair jerseys with text reading, "We can both break your ankles." The photo highlights the fact that each day the players practice for the same amount of time but that the male athletes tend to get more recognition than the female athletes. This picture and others like it are spreading around Twitter. The picture has 45 retweets and 66 likes and presumably many more eyes than that have seen it.

Through social media, Blazers of all genders push for the representation of female sports. They ask Infoflow to feature girls' games in their daily show. They push for people to attend both games and use their social media following and hashtags to make people aware of the inequality in sports.

With a few simple keystrokes, the #WhoAmIDistracting and #CheerForUsToo campaigns took off. One perfectly crafted tweet was the beginning of these three movements that have quickly gained momentum and are on their way to making tangible change at Blair. One sociology class may have spurred the attention, but these are issues Blazers' have always cared about. The internet simply serves as the medium. #BlackCAP persist to keep their movement alive through social media with retweets and likes. Black CAP spreads recognition of its message through the web.

Though the tweets are only 140 characters, they send a significant message. A message that Blair students will refuse to stand for gender and racial injustice, especially in their own community. Not only will many Blair students not stand for these social injustices, they're not afraid to raise up their voices and tweet about it.