After a close, defensive battle, Walter Johnson (10-2) defeated Blair's varsity girls' soccer team 2-1 in overtime Tuesday night, extinguishing Blair's hope of finishing the season undefeated. The Lady Blazers (10-1) held a 1-0 lead late into the second half, but a lapse with just over ten minutes to play allowed the Wildcats to even the score and send the game into sudden-death overtime. Walter Johnson then promptly ended the game, scoring just three minutes into the extra period.

Senior captain Annie Worden was disappointed with the outcome of the game. "It was a tough break, a tough bump in the road," Worden said. "We should have won." Blair had already beaten Walter Johnson once this year, a 2-1 championship victory at the "Big Train" Soccerfest, a soccer tournament hosted by Walter Johnson on Sept. 13. 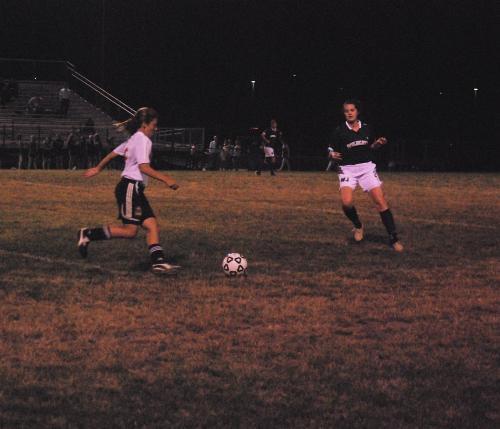 Photo: Freshman midfielder Jamie Kator lines up to clear the ball against Walter Johnson Tuesday night. Blair lost 2-1 in overtime for the first loss of the season.

Photo: Freshman midfielder Jamie Kator lines up to clear the ball against Walter Johnson Tuesday night. Blair lost 2-1 in overtime for the first loss of the season.

Head coach Robert Gibb was optimistic, despite his team's loss. "If there was a game to lose, it was this one," Gibb said. "There's a lot of added pressure that goes with being undefeated, especially entering the playoffs that way."

The Lady Blazers started out strong and maintained control of the game throughout the first half. Blair's impregnable defense allowed minimal shots and kept the ball out of danger. With five minutes left in the first half, sophomore forward Sofia Read fired a shot above and to the side of the Wildcat goalie, granting Blair a slim 1-0 lead.

Blair's control of the game slipped throughout the second half of the game. Worden battled her way downfield several times but was unable to score amid the intense pressure coming from the Walter Johnson defense.

Unfortunately, with barely eleven minutes left in regulation, Miller launched a long, high shot that slipped through the hands of freshman goalie Lena Meyerson, tying the game at 1-1.

In overtime, Blair started strong, but was unable to find the back of the net. Three minutes into overtime, Walter Johnson headed in a cross, ending the game suddenly for a 2-1 Wildcat victory.

The Lady Blazers already clinched the division 4A-East title with their Oct. 7 win against Wootton and are now looking ahead to playoffs. Gibb said that Blair has a relatively easy schedule for the rest of the season. "We already won the division and we're getting ready for a great playoff run," Gibb finished.

The Blazers' next home game is Senior Night against Northwood on Oct. 21 at 7 p.m.

Lauren Kestner is a staff writer for Silver Chips Online