As many sports teams are concluding their regular season and looking towards the post-season world of playoffs and divisionals, a review of their performances as well as expectations: 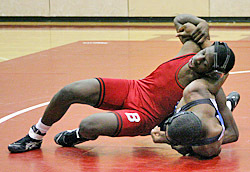 Varsity wrestling has established itself as a team to beat in the middle-weight classes, placing well at the Springbrook wrestling tournament. The team has struggled, as it has all season, forfeiting matches without wrestlers to fill the upper and lower weight classes necessary for dual meet wins. Seniors Mike Street and Jacob Weinfeld and junior Haben Ghebremeschel have led the team in points as well as wins. A deeper, more senior roster would be the solution to the team's problems with balance, but, since the season is nearing its end, the most feasible solution is to set the foundation for success in the upcoming 2007-2008 season.

INDOOR TRACK
Record: Scores not tabulated
While all other winter sports teams have been practicing in the relative comfort of indoor gymnasiums, the indoor track team has been training in the below-freezing weather outside. Senior Captain Emmanuel Waktola said that the adverse conditions made the team closer, not to mention a lot colder. "Because of the cold weather, we've been struggling through practice," he said. "We've all been suffering, but we've been suffering together." The team placed well at the County invitational in the boys' 100 meter run, 400 meter run, 4x200 relay and 4x400 meter relay and the girls' 1 and 2 mile. The team is ready for Regionals. "Now that we're really much more of a team, I think we're going to raise some eyebrows at Regionals," said Waktola. 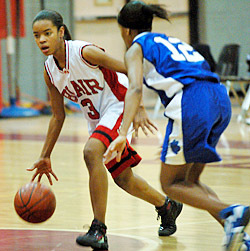 Photo: Junior Kalisha Holmes drives down the court during Blake's blowout of Blair, 72-28, on Jan. 26. Photo by Andrea Lynn.

Photo: Junior Kalisha Holmes drives down the court during Blake's blowout of Blair, 72-28, on Jan. 26. Photo by Andrea Lynn.

Ranked low in the county, with just one win over Cesar Chavez High School during the Holiday tournament, girls' varsity basketball has struggled to play as a team. Animosity amongst teammates has led to problems with communication on the court. As all teams in the league advance to the playoffs, the girls are hopeful, but not optimistic, about their chances. Ranked so low, they'll likely play a top-seeded team. The team has talent and the ability to win games, but is too inexperienced to play consistently for four quarters. Junior Captain Meghan Cadigan has grown aggravated with the team's inconsistencies on the court. "There've been plenty of times this year when we could've won, but in the third or fourth quarter we'll have a lapse and never recover," she said. "It's frustrating but it just means we have something to work on." Expect a stronger, more experienced team whose maturity will translate into wins in the upcoming 2007-2008 season. 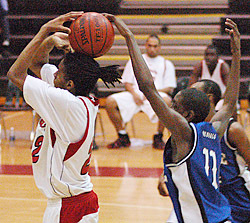 Photo: Boys' basketball is struggling again this year, despite having a new coach and plenty of talent on the team.

Photo: Boys' basketball is struggling again this year, despite having a new coach and plenty of talent on the team.

The varsity boys' basketball team has had a less than ideal season. Captained by seniors Ross Williams and Darius Smith, who lead the team with points and assists, the Blazers have more than once outdistanced their opponents for the first three quarters only to fall apart in the final minutes. The team has had moments of brilliance — forcing defending state champions Whitman into overtime, for one — but is plagued by inconsistency and poor execution. Cold shooting and mental mistakes have lost the boys seven of their last eight games, often by just a few baskets. With only six regular season games until the playoffs, the boys have yet to find their niche on the court. However, their playoff bracket consists of teams the Blazers have already beaten during the regular season — which may spell success in the post-season. 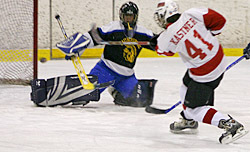 The Blair Community ice hockey team is not affiliated or sponsored by the Montgomery Blair High School athletic program or Montgomery County Public Schools. The team is an independent group of Blair students.

The ice hockey team began the season poorly, losing four of the first five games and tying the fifth. The team entered the second half of the season with renewed resolve, winning two league matches against Burke and one exhibition match against La Plata High School. The roller coaster of a season has, according to senior Robbie Ginsberg, brought the team together. "We're a much more tight-knit bunch, and that really shows if you track our performance over the season," he said. In light of their comeback, the team has a chance of making the playoffs — if Damascus loses to Burke in this upcoming week Blair will get a playoff seed. Assuming the team qualifies, their first match would be against first-ranked Walter Johnson. "Chances are slim that we'll beat [Walter Johnson] but making the playoffs would be cause for celebration all in itself," says Ginsberg. 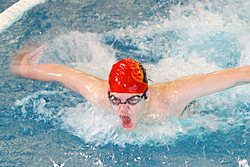 While the Blazer boys have delivered on their promise of a flawless season, finishing 5-0, the Blair girls have ended the season with an unprecedented 2-3 record with wins against some of the better girls' teams in any of the four divisions. A strong bench made up primarily of underclassmen was an instrumental part of the team's two wins, which, for a team that won only one meet in the past four years, is a huge improvement. "It's just really been a good year," said junior Captain Francesca Blume. The team swims first-ranked Walter Johnson in a non-divisional exhibition meet Saturday, Feb. 3, at Martin Luther King Jr. Swim Center. "Walter Johnson is the main competition for the boys' team for the county title so if we can beat them in a dual meet, that'll give the boys the confidence boost they need to edge them out at counties," said Head Coach David Swaney.