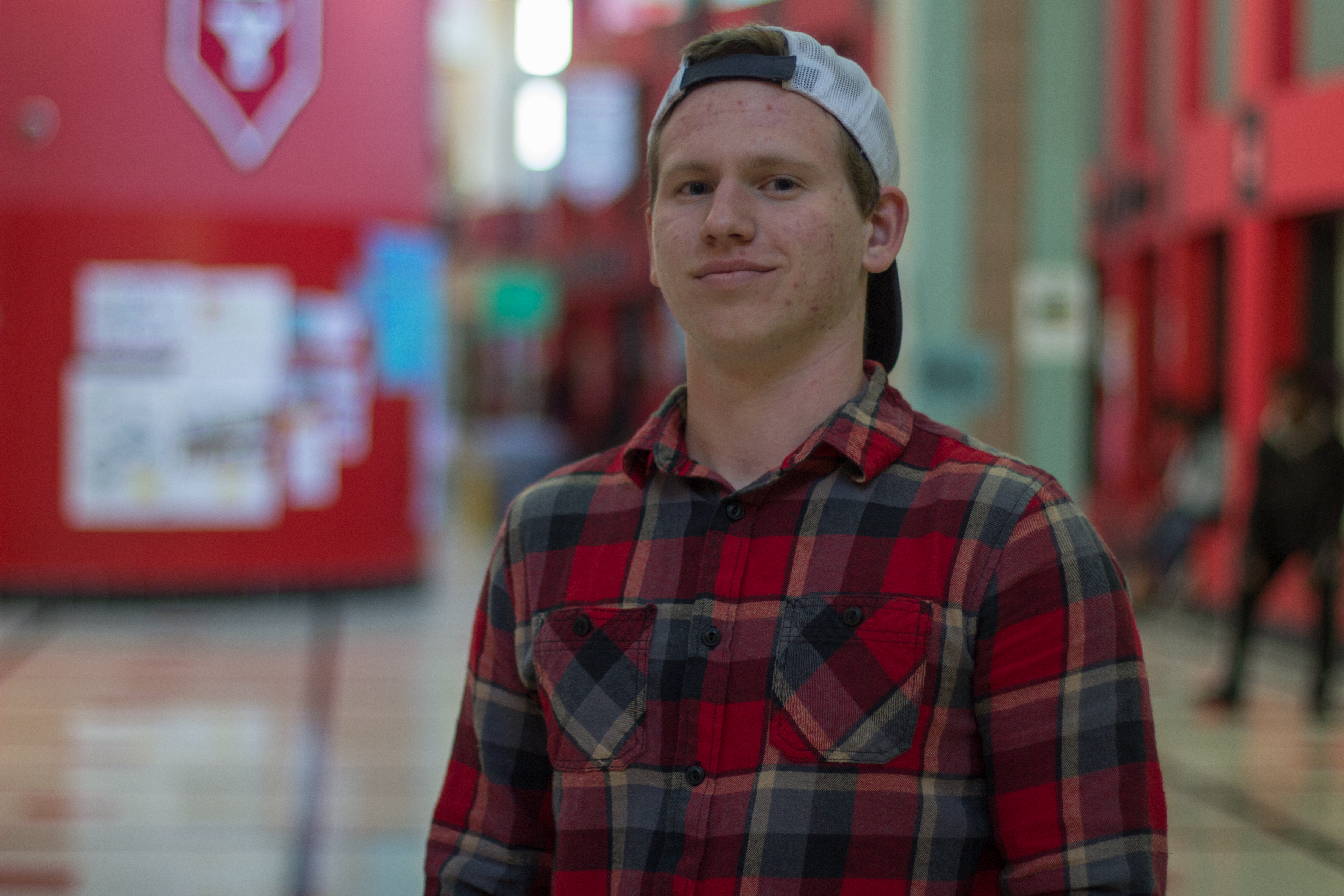 Photo: What a Catch!

The Blazers played their way to the postseason by successfully working together as a team.

A Blazer runs to the next base after his teammate gets a hit.

Photo: Getting in Position

Senior Paul Moser walks back into position after a play, another player guarding him.

Junior Uro Lyi circles around a player in order to get a shot on goal.

Even when the opponent came up, the players found a way to get around them.

Girls Lacrosse is a prominent sport at Blair, with a record of 9-6 throughout the season.

Photo: Away from Goal

Marike Pinsonneault, a junior, runs with the ball away from her opponent.

The Blair softball team celebrated the achievements of the 5 seniors on Senior Night.

A Blazer drops her bat to score another run.

Senior Lily Montgomery winds up to throw a pitch. Montgomery was among the five seniors on Blair's softball team.

Senior Alannah Blount performs a flip in her floor routine while her teammates watch.

Junior Olivia Amitay jumps up onto the bar to swing.

Senior Jasmine Scott focuses in close as she spins around the bar.

Photo: High off the Bar

Senior Jasmine Trejo jumps high off the bar during her routine.

The evil witch (Iyanu Bishop) checks her nails while watching over her mistreated workers.

The good witch (Karuna Nandkumar) tells Dorthy how she can get home.

Photo: Behind the Scenes

Derek Lamb watches over the sound from the back of the auditorium.

Junior Oliva Amitay performs her gymnastics floor routine during the meet on Tuesday.

Photo: Listening to the Music

Seniors come from nearby retirement homes to hear the nostalgic jazz the Blair band plays.

The event offered a fun, relaxing afternoon for the seniors who attended.

The Blair jazz band is followed by a performance from a local Maryland jazz band.

Junior Divya John sings a homage to the jazz of yesterday.

Teachers prepare to be hit by whip cream pies sold to the students for a dollar on Pi Day.

A student throws a pie at the board of math teachers.

Conor truly is the Obama Mama.

Senior Julius Cobb jumps up towards the basket.

Senior Kendall Douglas squares up for a free throw.

Tram's Blazer has especially pointy ears and a goatee.

This Blazer by Maske is an homage to the blazin' element of the school's mascot.

This Blazer by Yonkos is chubbier than most.

Emsfeld's drawing is especially unique, and shows the Blazer made out of flames.

Senior Eric Zokouri will be headed to Monmouth next year.

Delegates from middle and high school SGAs gather to decide which of the 13 SMOB candidates will move to the general election.

Blair student Michael Yin makes it to the second round of voting.

Blair student Chas Goldman makes it to the second round of voting and takes the stage to tell the audience about his ideas.

Blair Senior and MCR President Prim Phoolsombat hosts the nominating convention for the next Student Member of the Board.

Sherwood student Matt Post joins the general election where every students in the county will vote.

Alex Abrosimov makes it to the final round of voting for the second year in a row.

The SMOB candidates give speeches laying out their policy platforms.

The College Board, which creates AP tests and curricula, as well as the SAT, is technically a non-profit.

Senior Zhaxi Zerong helped his team to a victory on his senior night.

The teams look on as Nicole Grant's ball rolls down the court.

Volunteer to beat the cold.

Some snow falls onto the Blair courtyard during 7th period on Monday, January 30th.

Blair Junior Emily Fox makes her voice heard at a protest in DC.

A players kneels down on the ground to get a steady shot.

Junior Kayla McKenzie takes a deep breath while she prepares to throw the ball.

Blair hockey players fight to gain control of the puck.

The players celebrate after a close throw.

Photo: On the Wall

Women gather with signs while watching the march crowd below.

The crowd walked down the street while chanting together.

The march participants started to leave the mall and walk down Pennsylvania Ave.

Congressman Jamie Raskin speaks to Blair students during lunch on Wednesday the 18th.

The team captains lead the swimmers and divers in cheers after the meet.

Junior Eli Cohen prepares for a dive while standing on the end of the board.

Senior Nayman Leung dives into the pool to start the race.

A swimmer reaches out of the water during a butterfly event.

Senior Marianne Benyamin performs a dive that involves a flip.

Photo: Up and Out

Senior Elizabeth Cove breaks up and out of the water while swimming the butterfly.

Junior Captain Haron Adbaru counts the number of laps left for the swimmer in the pool.

The moon rises over Blair before school on Friday.

Houseparty is the hottest new app.

This guide will help you be the best gift giver of this holiday season.

Photo: Get the Puck

Brener Granston, an Einstein Junior, plays for Blair because his home school doesn't have a hockey team.

The DC Stars and Blair face off as Senior Wonder Abor takes the puck.

This year the Montgomery Blair football team had a record of 8-2.

Due to Blair's newfound athletic success, the school has finally embraced a culture of winning and school spirit has taken off.

A student performs to a large crowd at the open mic in the media center at lunch on December 16th.

The final number featured all the chorus classes and show choir members together.

The show choir performs one of their songs.

Photo: Focused on the Music

The concert opened up with a performance of the chamber singers.

The guitar ensemble performs a song.

The Girl-Up club sells bracelets to support girls around the world at lunch.

People wear safety pins to stand together against Trump.

Junior Maggie Wang gets a dig.

Junior Ryan Handel ties up in an attempt to gain leverage over his opponent.

Photo: Sweat and the Struggle

Junior Eli Cohen dives for Blair at the swim and dive meet on Saturday, December 3rd.

Snapchat streaks are the true test of friendship.

The Blair club hockey team won 3-2 against the DC Stars in a game last Friday.

Blair senior, Suriya Saravankumar, entertains other students with his magic tricks at lunch.

The students left the stadium at 11am to protest off the school grounds.

A mass of students leaves the Blair stadium.

Photo: Not My President

Photo: Out in Front

Student leaders march around the football field in the Blair stadium.

Photo: Going for the Goal

Senior captain Max Barbiari throws the ball towards the goal.

The team celebrates a close win against B-CC.

Photo: Down the Line

The POMS team forms one of their lines during a dance at football halftime.

The handball players try to coordinate a pass on the court.

Photo: Fight for the Ball

Blair player #18 fights for control of the ball.

In just a few years, Blair has established a strong football program.

The football team huddles up during a game.

Blair player Maggie Wang gets ready to hit the ball.

Photo: Reaching for the Ball

Blair player Maggie Wang spikes the ball to keep it going in the Blair vs. Wooton varsity volleyball game.

Photo: Jump for It

Senior Joanne Lu spikes the ball back towards Wooton.

Teammates laugh on the sideline during the game.

The team discusses strategy while holding each other close.

Blair player Kathryn Wang is joined by teammates as she runs to the incoming ball to prepare to spike it back.

The team assembles to make sure the ball keeps moving.

Coach Hoelman meets with the handball team at halftime to push them towards their close win over B-CC on Tuesday.

The ominous cloud sent students running out of the stadium to shelter.

The Sherwood Warriors and the Blair Blazers played a fierce game ending in a Sherwood win 43-26.

The impressive performance by Sherwood did not stop the Blazer fans from coming out in great numbers to support their team.

The Blazers chase after Sherwood Junior Michael Mbony as he runs the ball.

Senior Daniel Zavarce keeps the ball away from a Churchill forward.

Franck Djoumessi throws in against Churchill.

Sophomore Maddy Merrill scored a hat trick in the win against Kennedy.

Photo: Waiting in the stadium

Staff and students wait in Blazer Stadium for the school building to be cleared for their re-entry.

The seniors participate in the turning of their tassels

Photo: Speaking to the Seniors

Senior class president Nazea Khan speaks to the class of 2016

The senior class received their diplomas from principal Renay Johnson

From left to right: Will Ederer, Ben Miller and Charles Gryder.

Long-exposure picture of the back of Blair after the basketball game on February 9th.

The swimmers dive in the water before they swim the 500 free.

Friends help swimmers keep count during the 500 free which is too long to count at 20 laps.

A swimmer breathes as they enter their last few laps of the long and grueling 500 free.

At the start of the meet, divers compete for the highest score out of 10. Junior Marianne Benyamin performs a dive that involves a flip.

Sophomore Eli Cohen looks at the pool while performing a flip.

The pool deck gets soaked while the swimmers flipturn.

Two swimmers jump off of the blocks at the start of the race.

Three swimmers dive into the water to get a strong start for their race.

The sun sets over the student parking lot.

Eric Zokouri runs for a long touchdown in the third quarter.

Blair's offense could not move the ball consistently against the QO defense.

Trumpet player Alex Coy, a member of the show's live Mariachi Band, sounds a note that signals the beginning of the performance

In the end, friendship and love prevails, and the show concludes as a testament to the importance of family and friendship in everyday life.

The set, designed by senior Dio Cramer, masterfully reflects the beauty and extravagance of Latin culture.

For the last few years, Blair has used ‘blackbox theater' - a form of staging in which the show is surrounded by the audience on all three sides. This type of staging allows for an intimate and memorable viewing experience.

All eight shows were met with resounding applause from the audience.

The new BNC studio was built over the summer.

The new leaders of BNC have made a number of changes to the program.

The people on the sidelines are a critical part of the Blair football experience.

The cheerleaders lead the audience in a school chant.

Cub Scouts and Boy Scout Troop 33 hold a fundraiser at the festival.

The poms team performs during half-time.

Blair dodges Northwood in an attempt for a touchdown.

The crowd cheers for Blair.

The entrance to the indoor stages at the festival which show performers from different parts of the world.

A visitor makes his way across a rope bridge.

There were many colorful shirts for sale.

Many visitors rode their bikes to the festival, which overfilled the bike racks.

Non-profit groups take the opportunity to express their political views at the festival.

Companies, groups, and organizations promote themselves at the festival.

There are many options for food at the festival.

Blair struggles to save the ball.

Blair celebrates the victory over Northwood.

A band plays for an audience at one of the music stages.

Blair defense helps keep the ball out of reach of the Gladiators.