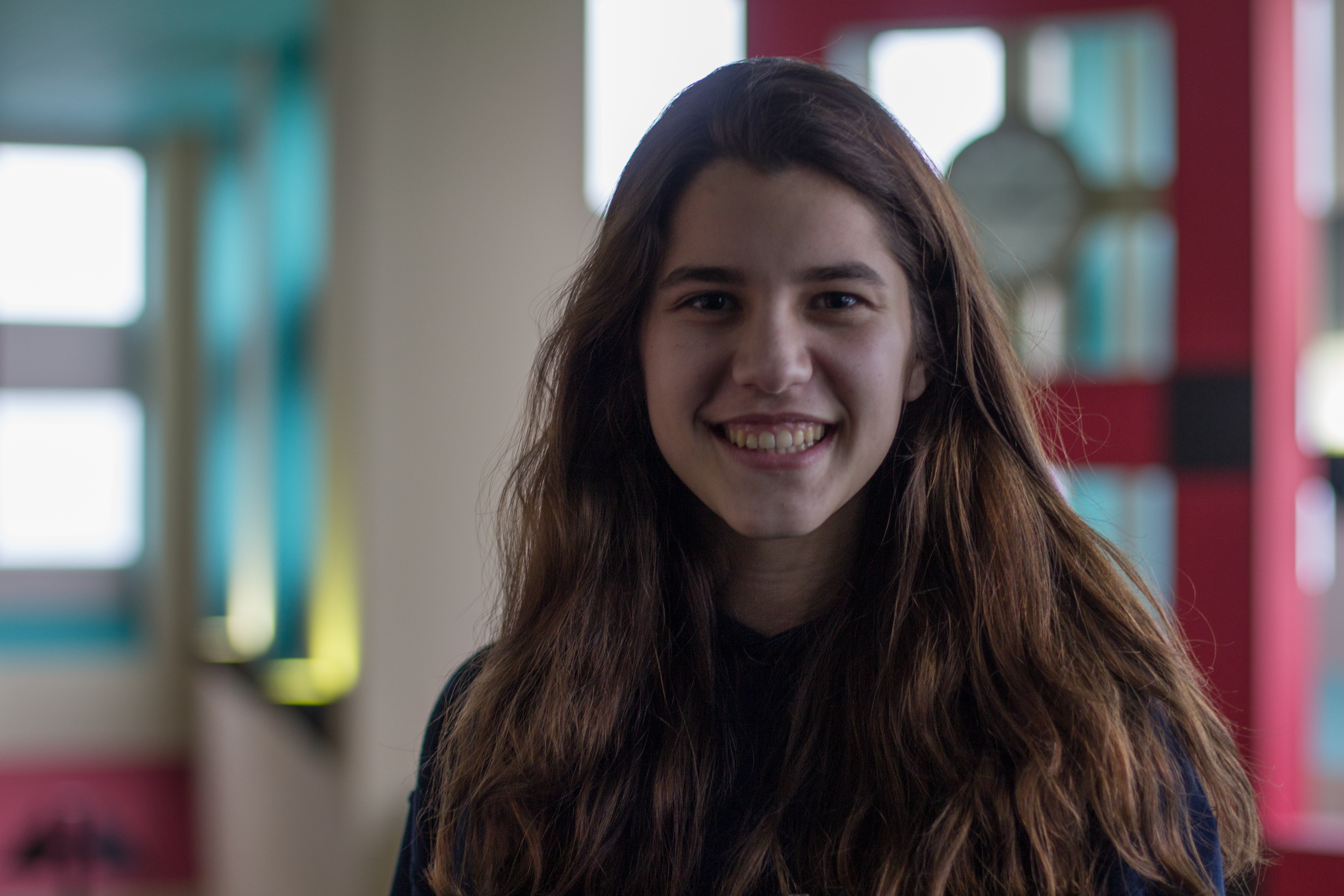 Name: Abigail Landesman
Position: Video Editor
Graduation Year: 2018
Hi, I'm Abby, SCO's Video Editor. Come to me if you want to have an in-depth discussion on Disney movies or gluten-free foods. Check out all of SCO's videos here: https://www.youtube.com/channel/UChQKJ8Jyaw6tgZUWha6SFSg.

Frank plays a piece on her violin in Blair's courtyard.

Selama Tesfamariam with Michael Zick, head of the SGA.

How much parental involvement is just right?

There were also many representations of real world animals displayed in the show.

A few honorable mentions were handed out, such as this black and white skull.

The first place work of art was a multicolored bowl.

After AP tests, many classes do fun activities to keep students engaged.

Ceramic students made flower pots into faces, which held different types of grass to represent hair.

There were works made out of many different mediums, including photographs on wood.

Juniors Joshua Dominguez and Sebastien Kraft watch the game from the sides.

Junior Joey Merrill throws a pitch as his teammates look on.

Sophomore Calvin Bruwelhide waits for a pass as he pushes further up the field.

Junior Uro Lyi waits on the line to be subbed in.

Blair's pitcher makes a strong throw to bypass the other team.

The Blair varsity softball team had a successful season, with 12 wins and 5 losses.

Even when playing doubles, tennis requires a lot of reaching to get the ball.

Juniors Natalie Daly and Maggie Gray cheer on their teammates during a game.

Blair's Tennis team did have a good season, winning 7 games and losing 4.

The team's successful season was filled with excitement and action.

Quick reflexes are also necessary to play a good game.

After a win, Andrew Komo congratulates his teammate.

A Blazer gets ready to bat.

Junior Emily Fox show off her flexibility during her floor routine.

The team works to impress the judges with their strength and grace.

Photo: Save the Animals

The Green Club fundraises for the World Wildlife Fund.

Jasmine Scott gets a surprise promposal during math class on Thursday.

Blazers practice their skateboarding skills during their free period.

Girl Up held a bake sale in an effort to fundraise money towards girls in need.

Isabel Present and Anna Barth work on their short documentary about a murder that is set to air on the next episode of SilverLens.

Blazers in math class take advantage of Pi Day to do a fun activity involving circles and skittles.

This immigration forum served to provide interested students with information about the recent executive orders and immigration raids.

Senior Suad Mohamud, one of the leaders of No Labels, introduces the guest speakers.

An important topic discussed was how to handle potential immigration raids.

Musician Emmanuel Jal spoke to Blair students in an assembly during fourth period about his trauma as a child soldier, as well as advice to stay motivated.

Jal invited students to dance with him up on stage during his closing out song.

The players get excited to play a great game.

Aissatou Bokoum wins the tip off to begin the game.

Redskins jerseys are a common site at Blair and other MCPS schools.

Abigail Dawit measures her substances during biology class as her partner, Rahele Eshete, looks on.

Sara Temple made a big impact in the matchup with Magruder.

Junior Raul Gonzales eyes the yellow ball before he throws his ball.

Marchers crowd the metro, feeding slowly up the escalators.

With her sign in front of the Capitol, a woman emphasizes the rhetoric of rape culture in our country.

Senior Lauren Frost follows through on a three point attempt.

Photo: Pump it Up

Blair cheerleaders kick and shout to pump up the crowd at the girls varsity basketball game.

Nisa Baig holds up a newly made bracelet in girl-up club.

Marc Monteil takes a fastbreak to the hoop.

We started with a red paperclip and traded it for a mechanical pencil.

The big crowd around one of the tables cheers as a winner of the pumpkin pie eating contest is announced.

Photo: Not My President

Students gather on the football field to peacefully protest the presidential-elect.

Shima Abdullah, Nisa Baig, and Suraya Mohamud listen to a speaker at the No Labels diversity workshop.

Blair junior Elaine Suh makes a run for the goal.

Blair sophomore Maddy Merrill rushes to steal the ball back from WJ.

Blair's Poms strike a pose when they complete their halftime dance.

Senior Nika Seider beats her defender to a loose ball.

Photo: Ball in the air

The Blazers dominated in the 2016 homecoming game.

A Blair player with his teammates to get around the opposition.

Blair's Poms strike a pose when they complete their halftime dance.

Blair cheerleaders try to get the crowd even more enthusiastic than they already are.

A group of friends shows their spirit for their school.

Daisy Yu and Christine Cho do Red Out a couple of days early to show how dedicated they are to Blair.

Mr. Cauley shows off his spirit with two students.

Three blazers (Niarah Jackson, Jennifer Garcia, and Theresa Guirand) show off their superhero costumes and makeup. Look closely at the eye shadow in the middle!

Photo: Henristote battles for the ball

Students wait in line for dinner after school.

Blair has started providing free dinner for students after school.

Cross country runners show off their Hawaiian gear while taking a nap during lunch.

After Blair student, Glenda Hernandez, passed away last week, a wall was dedicated for students to memorialize her.

Students pass the extra time they have at lunch by playing football.

The Blazers try to keep the ball away from B-CC players.

The team huddles during half-time.

Look in the bottom left corner of this year's agenda book, and you might find a surprise!

One of several plausible locations for Gahart's next strike.

Photo: Nika tries to get the ball

The varsity field hockey team huddles during a match between B-CC.