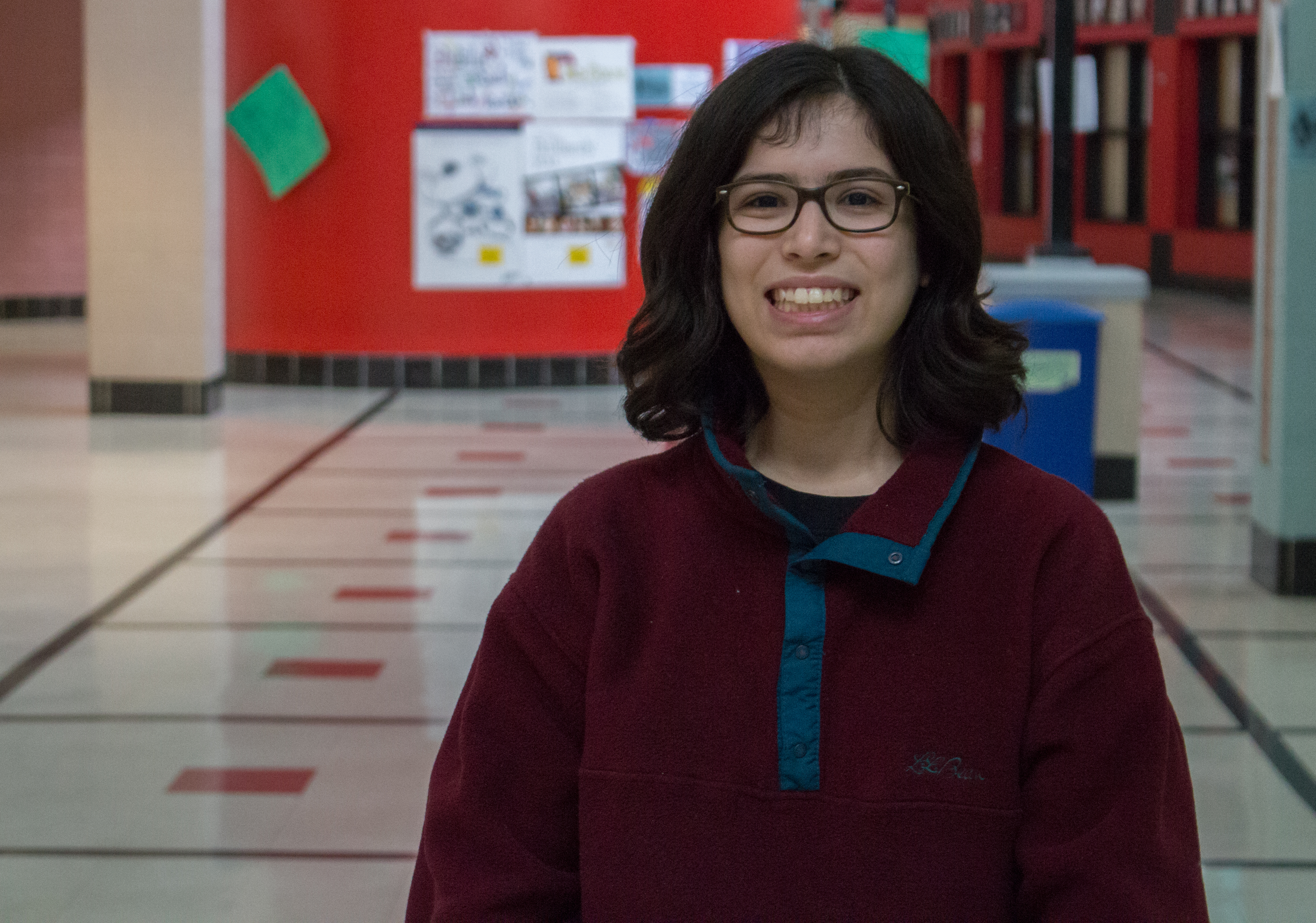 A student hold a sign that reads "Abolish the NRA" as the march stops to form at Union Station.

Senior Mae Gilligan rides with Metro to the meeting point at Union Station, holding a sign that reads "Protect Us."

Senior POMS captain Gilda Geist waits to jump up as her teammates spin behind her.

Senior POMS captain Emma Cross strikes a pose as the POMS team performs the modern part of their performance.

Senior Lewam Siltan smiles at the judges before performing a turn.

Photo: To the Left, to the Right

Senior POMS captain Gilda Geist smiles as she moves her pompoms in beat to the music.

Junior Ethan Ellis goes to the line for free throws

Before and during winter break, Blair students visited holiday light displays at places such as the Mormon temple, Brookside Gardens, and the national zoo.

Junior Silas (16) dribbles stride for stride with a player of the other team.

Senior Kevin Amaya jumps in the air as he pushes past the defense of the other team.

A decoration of a dead bride lays on the lawn of a home near Blair.

A house near Blair doesn't give kids an option as to whether they get a trick or a treat, their decorations showing it.

A child dressed as an eagle for Halloween watches a toy train that zips around a neighbor's home.

Senior captain Priscah Rodenhuis reaches out to return a stroke.

Photo: In This Together

Blazer football players tackle an opponent near the end zone.

Senior captain Gilda Geist smiles at the crowd as she dances with the poms.

Cheerleaders get into formation as they entertain the crowd.

The football team won the Battle of the Boulevard with a 46-0 victory.

The Inferno ended their season with a pink powder toss for breast cancer awareness.

The marching band played their final performance with a tribute to Pirates of the Caribbean.

Friends and family of seniors brought posters, flowers, and other gifts to show their support.

Photo: Smiles on the Field

Battle of the Boulevard and Senior Night celebrated the end of the fall season for football, marching band, poms, and cheerleaders.

Forensics classes inspected skeleton and tooth models this week in order to learn about body identification.

On Wednesday Blazers sported gear from their favorite colleges, while seniors wore their Senior Unity Day shirts and attended a college fair.

The outdoor garden at Blair exhibits new ways to be eco-friendly.

Captain Priscah Rodenhuis reaches out to return a stroke.

Sophomore Mary Chang gets ready to return a serve.

Some entomology students use mason jars to catch their bugs.

Some students decorated shoes with patterns, themes, and locations such as a tropical beach.

Students painted both realistic and abstract images of food and other everyday objects.

Photo: Everything is Blue

Sculptures of fantasy-like animals were displayed across tables.

Friends, family, and fans of the team came to support them for the game.

The softball team made it to the playoffs after their successful season, and won their first game 9-5.

Blair's Tennis team gathers before their game to get ready.

Photo: On the Line

Blair girl distance runners wait for the gun to go off to start the 1600m race.

Part of tennis is waiting for the right moment to hit the ball.

Blair works well as a team during their tennis games.

A good serve starts off a match, and can lead to a great season.

A student holds a cooked cricket they are about to eat for a video entitled "Blazers eat Gross Foods" which you can find under the video tab.

Junior Sophie Falvey presents her Capstone project in the media center for other students.

Samuel Ramsey shows the audience photographs of him with his bug collection while speaking about overcoming fears.

The girls track team gets ready to start the 1600m run.

Local community members such as Jose Segura gave talks about life events and achievements or concepts that they wanted to share.

Soda cans spelling out "TED X" were displayed in the lobby, along with a buffet and Italian ice for audience members.

T-shirts were handed out to students who attended and helped run Blair's first ever "TED X" event.

A facilitator holds up three fingers to indicate the time limit of the current talk.

Each speaker answered a certain number of questions relating to the subject of their talk.

Volunteers worked at the buffet to serve a large array of food to all attendees.

The International Night buffet consisted of a large array of foods from all over the world. Students and parents prepared chicken satay, Japanese rice balls, and yuca, among other dishes.

International Night included a henna table where students got their hands painted, as well as a face painting station.

Each table in the SAC had a label for a certain country, such as Laos, France, Ethiopia, or El Salvador.

Demetri Cooper dribbles down the court as he evades his opponent from Paint Branch.

Photo: Head in the Game

Sophomore Ethan Ellis keeps the ball away from a Paint Branch team member in a tight moment.

Photo: The Power of Speech

Mary Beth Tinker explains her experience with being suspended for standing up for free speech.

The Maryland Department of Education is changing the HSAs.

One Blair bracelets are displayed in the library. Students sport the bracelets to show support for their peers and the Blair community.

Photo: The Power of Words

Junior Hermela Mengesha is among the many students to recite poetry throughout the performance.

Students sing "Lift Every Voice and Sing" after an African fashion show to conclude Sankofa 2017.

Sophomore Alexis Stewartson and the entire Sankofa cast performs a gospel song to start off the second act.

The entire Sankofa cast performs a gospel song to start off the second act, with sophomore Alexis Stewartson as a featured soloist.

Zoe Denton performs a rap that she "wrote" throughout the show after learning about history in class.

Photo: Justice For All

Sophomore Ollie-Angel Nono and her partners sing America the Beautiful and recite the Pledge of Allegiance to begin Sankofa 2017.

Junior Iyanu Bishop performs a solo while backed up by her castmates.

Junior Noelle McKoy and her fellow performers engage the audience during a dance number that closed out the first act.

The class turtle in room 256 eats her breakfast during first period.

Kadidja Niamey takes a Bob Marley quote off of the wall of positive messages on Blair Boulevard for Isaque Oliveira, a Blair student who recently passed away.

Junior Brian Hunyh focuses on trying to pin his opponent down during senior night.

Two women carry a rainbow flag as they march down 14th Street.

Members of the Cups club eat lunch while they give free therapy through the 7 Cups website.

The Blair poms line up during their pep rally routine.

Young, a new member of Blair staff, busy at work.

Latino Achievement Coordinator Melissa Young stands outside her office in the Media Center.

A featured violinist plays a solo during the concert.

A cello player focuses on his music while waiting to play.

A cellist plays during the orchestra's lunchtime performance.

The Blair orchestra plays an impromptu concert in the courtyard for Parent Visitation Day.

Many students who had never met Hernandez wrote messages on the wall in solidarity with her family and friends.

Photo: You're an Angel

Students wrote messages on a tribute wall for senior Glenda Hernandez after she passed away last month after a battle with cancer.