The Blazers attempt to close the Gladiators' wide lead

Blair's girls varsity basketball team (1-3) narrowly lost to the Northwood Gladiators (1-4) with a score of 42-48 on Thursday night. Although the Gladiators had a large lead throughout most of the game, the Blazers fought hard in the last quarter to close the gap.

The game was energy charged from the start, with a foul by Northwood four seconds in. Unfortunately, the Blazers failed to capitalize on their free throws, allowing their opponents to grab the ball off the rebound and score a two-pointer. After the ball was knocked out of bounds by Northwood, the Blazers took possession of the ball. Successfully fending off Northwood's defense, junior forward Adia Keene scored a basket and evened up the score to 2-2. Hard passes and quick steals off the rebound let Northwood score two successive baskets.

A foul this time by the Blazers gave Northwood another point on the board to pull ahead by 2-7. After sophomore guard Kate Hildebrant scored a two-pointer, the Gladiators attempted a shot that was successfully blocked by freshman point guard Emily Liu. Blair was fouled for traveling, handing over the ball to Northwood. Following a display of great teamwork and coordinated plays, the opponents scored another two points. 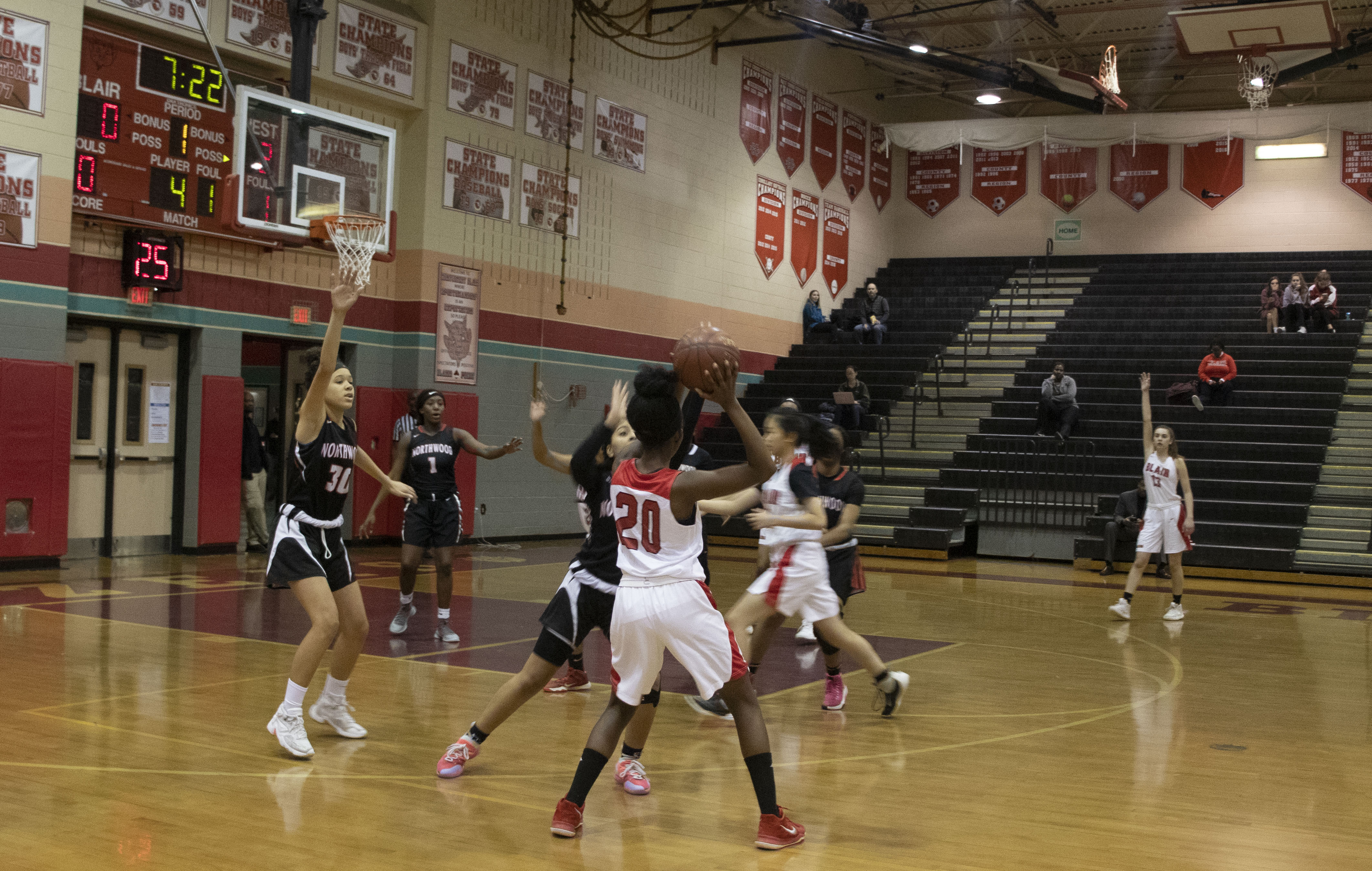 Blair followed up with two successive baskets, tying up the score to 8-9. Another foul by Blair allowed Northwood a successful free throw. After driving the ball quickly up the court, the Gladiators scored another two baskets. With less than two minutes left in the quarter, Blair coach Amy Ferguson called a time-out to discuss defensive strategies. However, the Blazers were unable to prevent Northwood from scoring twice more within the next minute. A traveling foul by Blair kept the ball in Northwood's possession. The Blazers failed to capitalize on the remaining time and ended the first quarter down 8-18.

During the second quarter, Blair matched Northwood goal for goal and slightly narrowed the gap. For the first four minutes, the two teams battled for possession and neither scored a basket. A foul by Blair allowed Northwood to score a free throw. The Blazers fought back with a vengeance, with Liu and Keene each scoring a two-pointer. Liu then successfully made two free throws and tightened the score to 14-19.

After Blair threw in the ball, the Gladiators stepped in and intercepted the ball. However, Blair managed to recover it and junior point guard Zoe Abramson scored. Following a time-out, Northwood put high pressure on Blair offense and cornered the Blazers in order to steal the ball. They scored three baskets and closed the first half with a wide lead over Blair of 16-25.

Northwood pulled further ahead of Blair during the third quarter by capitalizing on free throws when Blair failed to. The quarter began with two immediate baskets by the Blazers, but Northwood gained possession off the rebound of Keene's missed shot. The Gladiators then fouled Keene and Liu, who both missed their free throws. Later, a foul on Blair's part gave Northwood two free throws, which they successfully both made.

After Northwood matched a Blair basket with three of their own, the score was 22-35. A foul by Northwood awarded Blair two more free throws, which were taken by sophomore center Peyton Martin. She successfully made one of the baskets. Northwood scored again and a pushing foul by frustrated Blazers allowed the Gladiators to score two more points on free throws.

With one minute left in the third quarter, Northwood committed yet another foul. Liu scored only one of the free throws, leaving the Blazers behind 24-39. The quarter ended with a basket by sophomore point guard Yinka Scott with ten seconds on the clock, leaving the score at 26-39.

During the fourth quarter, the Blazers fought valiantly to catch up to the Gladiators but ultimately failed. Northwood scored the first three-pointer of the game and then proceeded to foul the Blazers. Hildebrandt, who took the free throws, successfully made both shots. A traveling error on Blair's part caused a turnover when the Northwood coach called a time-out.

The game resumed with six minutes left on clock. In the next three minutes, the Blazers scored three more baskets and after Hildebrandt scored a three-pointer, brought the score to 37-42. The Blazers held strong against Northwood's offense and prevented them from scoring until the last minute of the game. A foul on both teams' part brought the score to 40-45, with a narrowing lead for Northwood.

As time was running out, Northwood capitalized on breakaways to score. Blair retaliated with a basket of their own, but could not edge out the Gladiators. In the last 30 seconds of the game, the Blazers committed another foul, giving Northwood a last free score to finalize the score at 42-48.

Although the Blazers got off to a rough start, they made a strong effort in the last quarter to take back the match. "This was a rough game for us. We came out a little flat-footed; the team wasn't making smart passes and there were too many turnovers. However, we made a valiant effort in the end in an attempt to come back from the 16-point deficit," Ferguson said.

The Blazers will play their next home game on Friday, January 11th against the Springbrook Blue Devils at 7:15 p.m.