Girls' soccer worn down by Warriors

Loss to Sherwood knocks Blair out of playoffs

The Blazers (7-8-1) lost to the Sherwood Warriors (10-3) 4-0 in the second round of playoffs to end their season. The Blazers could not keep up with the intensity of the Warriors attack and fell behind as a result.

For most of the first half, Sherwood held most of the possession in Blair territory and peppered senior goalkeeper Madeline Burke with shots. Burke held strong in goal to ward off almost all of the attempts, but a ball bouncing around the box found its way into the back of the net to put the Warriors up 1-0 in the ninth minute.

From then on, the Blazers seemed to be unable to string together many passes against the overwhelming Warriors pressure. Sherwood continued dominating the possession and taking shots and scored again in the 26th minute to double their lead. The Blazers had a couple of chances for counterattacks but were stopped by Sherwood's solid back line and ended the half down by two goals. 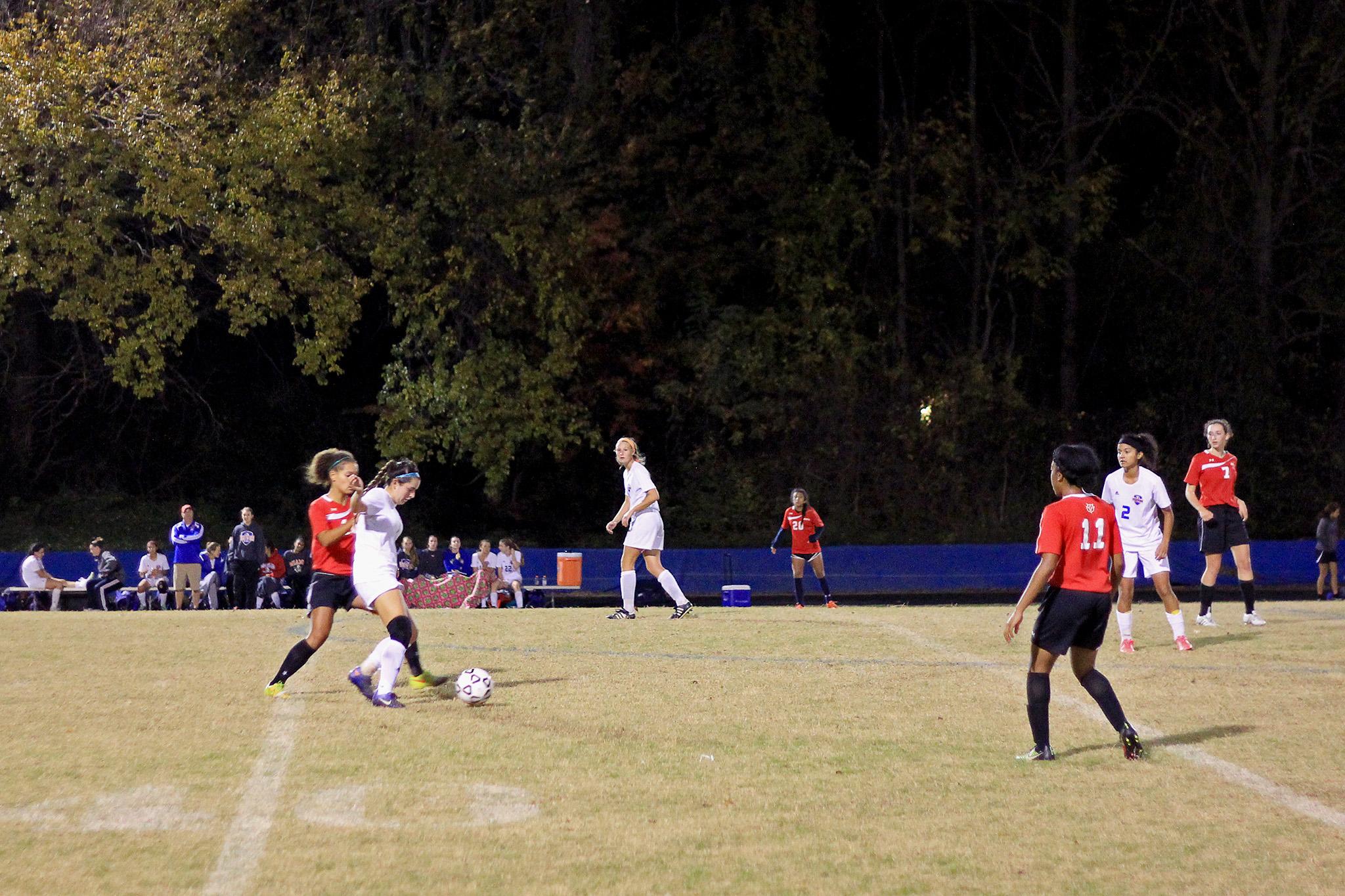 Photo: Senior defender Camille Franks goes in for a tackle.

The Blazers struggled offensively with passing and moving the ball around, according to sophomore midfielder Elaine Suh. "We couldn't get our offense going which we really needed to do," said Suh.

The second half saw more chances, with freshman forward Maddie Merrill hitting the Warriors on the counter attack, but the Blazers were held scoreless by the quick Sherwood back line. Merrill had a chance in the 48th minute but was stopped by the Warriors who led a counterattack to score a minute later. Blair's offensive troubles continued throughout the rest of the game and the Blazers couldn't get deep enough into Warriors territory to create chances. Sherwood, on the other hand, scored again in the 79th minute to go up 4-0.

According to Suh, the Blazers did not play at the same level they played at against Einstein the round before. "We played like we were out of it. We just didn't show up ready to play," said Suh.

Though there were some things that could have been done better, the Blazers are happy with the way their season went overall. According to senior forward Kelly Mayo, this season was the most successful in her time at Blair. "I think this season went well and that we played better as a team this year than we have in years past," she said. "It was a lot of fun and we just had a lot of really close games this time around."

Despite the loss, they are hopeful for next season. "Next season we'll play more as a team, like we did this season, and we'll be able to beat this team," Suh said.